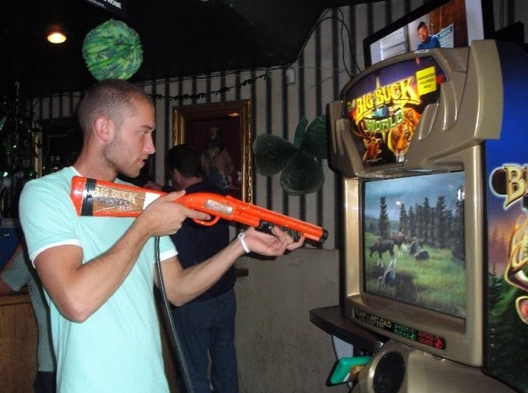 What’s your job?
“Bartender at Ray J’s American Grill in Woodbury. I have worked there for six and a half years.”

Other than your job, what are your claims to fame?
“Other then my job, my Big Buck Hunter status is my only claim to fame! Broke into the scene two and half years ago and have done nothing but progress since!” [Editor’s note: Clay Conrad is currently the highest-ranked Big Buck Hunter player in the country, and will be competing in the Big Buck Hunter World Championship in New York next month.]

What’s your relationship status?
“Single, but a wiser man once said, ‘You need to slay some dragons before you get to the princess.'”

Where are you most likely to be seen?
“Living in St. Paul, it is easy to find me on Grand Avenue. Billy’s is always a solid choice on top of the fact that between my roommate and I we know the majority of the staff. Also, working in Woodbury I have made great contacts there. One of my best mates works at Champps Americana in Woodbury, and I play Buck Hunter occasionally at Wild Bill’s. When I’m getting serious about Buck Hunter you can find me at Riley’s Pub in Oakdale. But working every weekend I don’t hit downtown much, nor am I a big fan of the ‘crowd’ it attracts. Not looking to sift through a crowd of guys wearing rhinestone jeans, Affliction t-shirts, and sporting chinstraps and a spray tan…but if I do make my way over there you can find me at Bar Louie, Brit’s Pub, or Elixir Lounge. Elixir is really the only ‘club’ place I will go because a good friend owns it and treats us all very well.”

Where are you least likely to be seen?
“I tend to avoid the downtown area on weekends and I can only take so much of Uptown. Hipsters are taking over viciously. I definitely prefer to be in the city versus the suburbs and I wont go to a place with lacking service such as Bar Marvel—being in the industry I need a place where the bartenders know how to make drinks and the atmosphere is a little classier. Nowhere where the women are holding their wine glasses by the bowl. I stay away from places where people are looking for ‘cheaper is better.'”

With whom are you most likely to be seen?
“You can catch me perusing the town most likely with my roommate Bryan Angeles, 27. He is a local DJ under the name Knights of the Turntable, so he and I have similar schedules and are able to go out a few nights a week. I am a ‘more the merrier’ type of person; I love being around people, meeting new people, and exploring new things. If I’m not with my roommate I’m usually with my golfing mates, Chris Norbeck and Mario Delgado.”

In what neighborhood do you currently live?
“I’m currently living two blocks off of Grand Avenue and loving this area of town. Walking my dog Crumpet, a Pembroke Welsh Corgi, is perfect on Summit. The houses are immaculate, especially right now in the fall.”

What’s your ride?
“I actually just recently purchased one of my many dream cars: a 2011 black Tahoe. Dark tints are always a necessity.”

What’s the best way to start a conversation with you?
“Be genuine; don’t use lines. I have been told I am intimidating to approach or talk to, but I couldn’t feel more opposite. Confidence, confidence, confidence! If you don’t have confidence in yourself, no one will have it in you…but there is a fine line between that and cockiness. Find common ground, get the ball rolling. I love people who are bold and speak their mind: be blunt. I’m really big on bringing chivalry back, so a chat chit, not chit chat, with the opposite sex is always welcoming. Preferably not about Buck Hunter.”