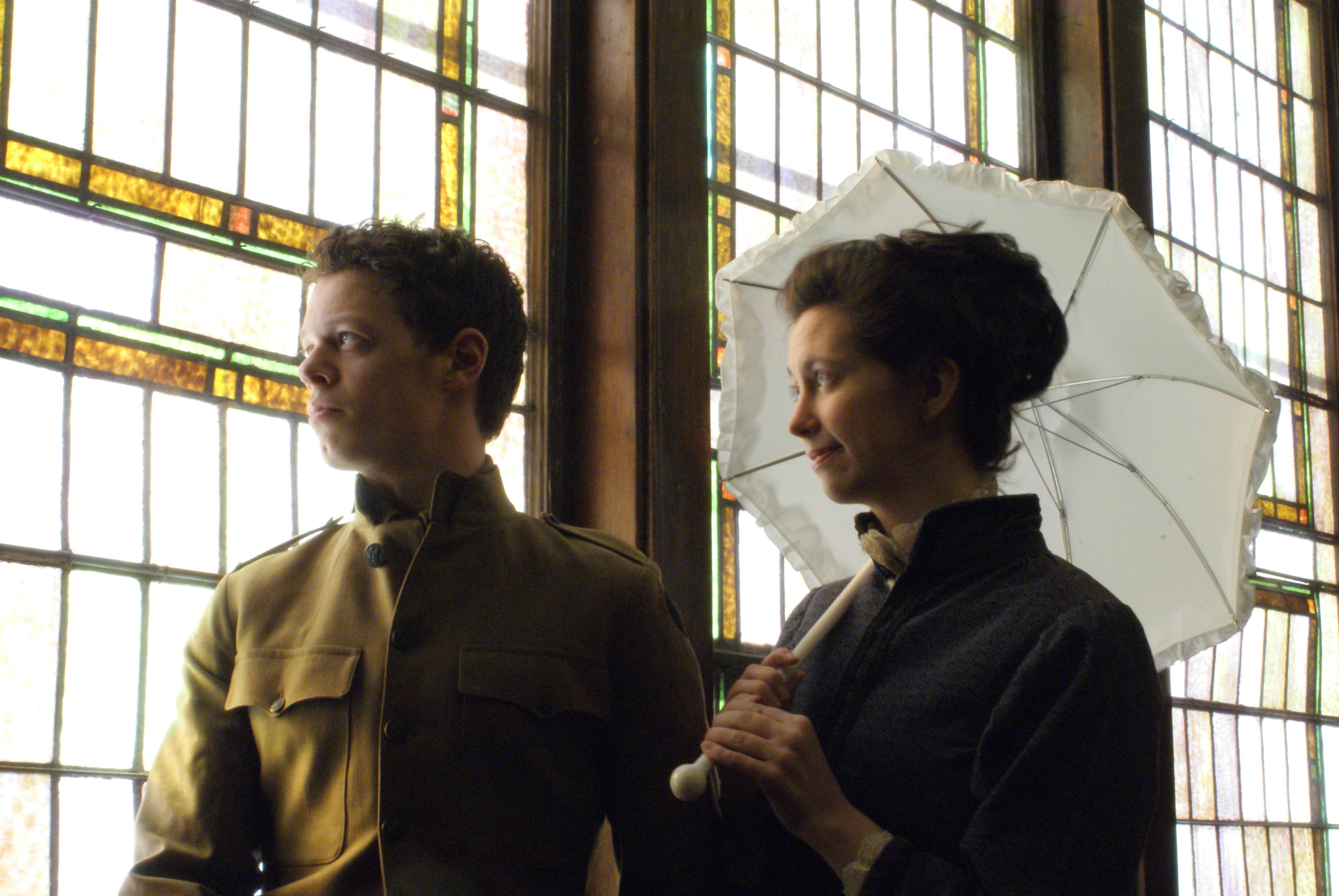 It’s tough being a woman in Shakespeare’s plays. Often, you’re stuck in a supporting role with no plot of your own—unless you’re lucky enough to be named Rosalind, Beatrice, Viola, or Lady Macbeth. Don’t get me started on Juliet. That play annoys me, and the girl and everyone around her are idiots.

With strong Shakespearean roles for women in such short supply, it’s no wonder theater companies gravitate toward the comedy All’s Well That Ends Well, with plucky Helena and her adoptive mother the formidable Countess of Rossilion. Both ladies have a lot of good material with which to take the stage. But as the current production of the play by the Classical Actors Ensemble makes clear, one could be forgiven for questioning the intelligence of Helena’s and the Countess’s decisions concerning the men in their lives.

Helena (Danielle Siver) pines for the Countess’s son Bertram (David Darrow). The Countess (Janet Hanson) encourages young Helena to go after what she wants. (Given this coupling and their previous production of ‘Tis Pity She’s A Whore, I’m starting to wonder whether the Classical Actors Ensemble has a thing for plays featuring incest, both real and borderline. Next up, the iambic pentameter version of The Hotel New Hampshire?)

Helena’s late father was a renowned physician. Helena uses her father’s medical bag of tricks to help heal the ailing King of France (Randall J. Funk). The grateful King gives Helena the pick of all the eligible bachelors in the kingdom. She of course chooses Bertram. To say Bertram is less than thrilled with the idea would be an understatement. After their arranged marriage ceremony, he not only refuses to touch her, he enlists in the army and heads off to fight rather than be with her. He leaves her a note saying he won’t be back, and won’t be her husband until she somehow gets his family ring off his finger and on hers, and becomes pregnant with his child. Both prospects seem fairly impossible, since they start out their married life in completely different countries.

Joseph Papke directs a large and capable ensemble on the stage of the Walker Community Church, but All’s Well That Ends Well only works if the audience goes along with two things. One, the audience has to continue to think that Helena’s pursuit of Bertram is a good idea, and that she wouldn’t just be better off ditching the guy and finding someone who actually likes her. Two, the audience needs a high tolerance for and enjoyment of Shakespeare’s clowns, because here we have not one but two. If your threshold of pain for aggressively mismatched romantic partners and low comedy isn’t pretty high, All’s Well That Ends Well won’t end well.

All the elements that made Classical Actors Ensemble’s last outing so much fun are here again—the simple set, the universal lighting (light on audience and actors alike throughout the evening), the inventive use of the multiple levels of the church’s sanctuary space. Also present is that same easygoing atmosphere in which clever musical interludes in place of a hard-and-fast intermission time keep the evening flowing and communal from start to finish. It’s hard to decide which is more musically charming: the big-band style reworking of some tunes, or the barbershop-quartet treatment of others (notably Pat Benetar’s pop rock anthem “Love is a Battlefield” sung, of course, by men in uniform).

Beneath all the production trappings yet again is a solid understanding of the text. The audience gets a real sense that the ensemble has studied each and every line, worried out its meaning, and then found a way to present it in the most authentic and entertaining fashion possible. The only peril in this approach is when you choose a script that is perhaps a bit on the flimsy side to merit such scrupulous attention. All’s Well That Ends Well is still Shakespeare, of course, but one gets the feeling that maybe here he’s a trifle too clever for his own good, or that of his characters. Everyone is so relentlessly witty, and enamored of wordplay, at times it’s like watching an Oscar Wilde play: you have to admit it’s funny, but it’s so funny it’s almost exhausting. That, and sometimes the characters in Wilde never really become fully human. Sometimes you just want everyone to heed Elvis and give us “a little less conversation, a little more action.”

This isn’t the company’s or the production’s fault. They’re doing such a good job presenting Shakespeare’s sometimes wobbly comedy that wobbly moments come through loud and clear. And the imbalance hinges on those two points noted earlier. Danielle Siver is so good as Helena the audience can’t help thinking, “She could do a lot better than this jerk.” David Darrow shows off young Bertram’s faults in sharp relief, and though the actor himself is seven different kinds of adorable, cute’s only gonna get you a pass on a couple of missteps. The audience starts to doubt Helena the longer she cuts the guy some slack instead of cutting him loose.

In addition, the play’s two clowns—Parolles (Christopher Kehoe) and Lavatch (director Papke doing double duty)—devour such enormous amounts of stage time that the audience could be forgiven for wondering, “Just whose story is this anyway?” Kehoe, as the outrageously costumed but cowardly soldier Parolles, comes very close to committing grand theft in the “stealing the show” category. The play gives him the material and he more than runs with it. Kehoe is just as shameless (in a good way) as his character. His buffoonery is unrelenting. The “torture” he endures later in the play, reminiscent of Malvolio’s mistreatment in Twelfth Night, seems entirely deserved, and then some. In fact, while the abuse of Malvolio often seemed mean-spirited, the more Parolles buckles under his torment, the more he reveals himself to have even less character and honor. His capacity for betrayal in service of his own self-preservation is boundless, and worthy of a harsher punishment than he ultimately receives.

All’s Well That Ends Well may also be a casualty of the times in which we live. The subject of war doesn’t strike me as fertile territory for light, fluffy romantic comedy these days. Betrayal of one’s fellow soldiers is serious business, not a setup for wacky hijinks. War being preferable to marriage seems ludicrous and club-footed as a plot device. Again, not the production’s fault. That’s all on Shakespeare.

I like Classical Actors Ensemble’s style. It’s a different way of engaging an audience, and of working with classic texts such as this one. Even if the material doesn’t quite match up to the loving treatment they lavish on it, it’s still intriguing to watch them present a play in this way. If you haven’t yet seen them in action, you should check them out. Once again, I’m curious about what’s next, and that’s a good place for a theater company to leave me.