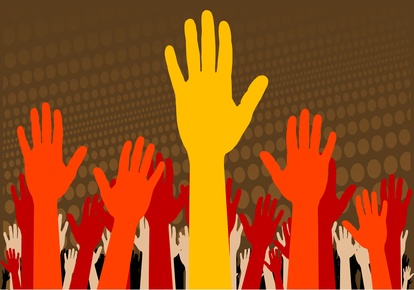 The St. Paul Federation of Teachers and the St. Paul Public Schools are in contract negotiations, with disagreement over class sizes standing as one of the contested issues.

Teachers have proposed a cap on class sizes in the contract now under negotiation. The district wants more flexibility, with class size goals and a range based on averages. With no agreement in sight, the union filed for mediation in December.

Parents see class sizes going up. “This has been a phenomenon that’s been going on for years and years,” said Craig Roen, president of Parents United for Public Schools. “When my kids were in elementary school, there was a real effort to keep class sizes as low as possible, with the preference to cut other things,” he said. For instance, cutting nurse hours or cutting enrichment programs have been ways to save money and keep class size down.  (District numbers confirm increasing class sizes.) 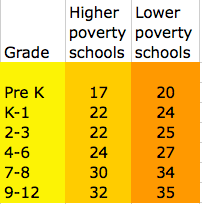 At Central High School, Craig Roen’s daughter is taking a lot of pre-IB courses, where there are typically at least 40 students in a class. “What you get is a lot less individualized attention,” he said. “At this point for her it’s kind of normal. She has had to go through a process of adapting. It’s just that with that many kids in a classroom, if there’s any kind of disruption or problem kid, the teaching very rapidly erodes. It becomes very difficult for some teachers to manage a class of that size.”

Even good teachers have been really challenged, Roen said. “When you’ve got 40+ kids in a classroom, with four or five classes a day, you can’t individualize. You just can’t do it,” he said.

Alec Timmerman, a teacher at Washington Technology Magnet School, said in an email said that he has a fabulous school, with freshman testing at college math levels, but he also has classes with close to 40 students, in which 38 of the students are high-need and all need extra help. However, Timmerman worries that talking about struggles and problems makes things worse. “They myth and perception of the failing urban school is probably the biggest thing killing us,” he said.

This year, Timmerman’s class is 35 students. To deal with increasing class sizes, the teachers have used a team-teaching approach, Timmerman said. Once a week, he meets with the other teachers to talk about what the students are struggling with, and solutions from a teaching perspective. To help the teachers, they use a computer program called Task Manager that helps track particular problems that the students are having. “Technology and working together are the two main things that help mitigate the large class sizes,” he said.

Ann Hobbie, a project coordinator at Parents United for Public Schools, said her son’s math class at Central High school has 51 kids. “Central is really popular — they’re functioning at max capacity,” she said. The ninth and tenth grade pre-AP and pre-IB classes in particular are very large, although in later grades there are more electives and they tend to not be as crowded.

“The teachers have been really impressive so far,” Hobbie said. “They offer a lot of help after school.” However, what worries her, as a parent, is the unfair burden on teachers in terms of evaluation. She also worries about relationship building. “Do they know my child?” she asked. One thing that was heartbreaking was that he didn’t make the soccer team as a freshman because there were too many kids.

Deb Pleasants, a parent of a student at Capitol Hill Gifted and Talented Magnet School (and also a TCDP writer), said her son’s class sizes have gone up nearly every year (he’s now in sixth grade). Last year, class size peaked, with 34 kids in fifth grade with one teacher. This year, the class size has gone down by two.

“Last year the teacher’s hands were full,” Pleasants said. This year, the teacher has welcomed parent involvement, so Pleasants has done quite a bit of volunteer work, helping small groups of students doing reading, to give the teacher more opportunities to teach the bulk of kids. When class sizes get so high, Pleasants said, “it gets hard for teachers to address individual needs.”

Class size is definitely something Pleasants and her husband are examining as her son looks at high schools. “What we’ve noticed, because of the larger size there is constant activity.  We think he does better in a smaller learning environment,” she said. Still, overall, she’s very pleased with SPPS. “They do a really good job at educating… I just hope they can figure out a way to get classroom sizes smaller. We don’t want to leave the public school system. We’re strong believers.”

Heyman’s three kids are either students at SPPS currently or have graduated. For her oldest, who is twenty, she said the class sizes were all across the board, but “they are inching up.”

At Central, Heyman said, the principal has made a huge effort, when funds are available, to keep the math and science class numbers down.

Heyman doesn’t blame the principal, or even the school district. “It’s coming from the state,” she said. At Capitol Hill, she said, the reasons class sizes got bigger is because when you add more bodies, you get more money per pupils, so you can keep up with programs rather than cut back on other things.

Heyman was a substitute teacher in SPPS, and said difficulties arise with higher class sizes. “There’s a certain percentage of kids that have a learning difference,” she said. “You try to organize a classroom to meet the needs of all these different kids in all these different learning spectrums.” Some students have a hard time processing information, while others have a hard time sitting still, she said, and any time you go above 30 kids, it becomes difficult to manage all that.

It’s all about funding

“Everyone wants kids in the school,” said Ann Hobbie. “That’s how you get funding. The climate of competition is used to attract kids. Everybody wants their kids in the door.” If someone is entitled to come to school because they live in the neighborhood, the school can’t turn them away, she said.

Things were different when Hobbie taught in the Roseville public school district in the 1990s.  “We were fatter then,” she said. “We had a lot more staff, and paid volunteer coordinators. Teachers had a lot more support.”

According to Hobbie, the funding formula has not kept up with inflation. The funding has increased 1.4 percent annually, she said, while inflation has increased three percent. This has led to a decrease in revenue, where dollars don’t go as far and food and transportation costs keep going up. Ten years ago, 50 percent of school districts had operating levies. Now ninety percent do.

It used to be that city-wide tax levies provided supplemental funding to schools, according to Craig Roen. Levies would go to enrichment programs or other “extras.” Now, local taxing authorities have to come up with more and more dollars in order to make up budget shortfalls. School funding is much more dependent on local levies. Roen gives the example of North Branch, which is down to a four-day school week, because they simply can’t afford five days a week.  “It shouldn’t be that way,” he said.

Most of the funding goes to pay staff, Roen said, and SPPS “actually does a pretty darn good job of moving dollars to the classroom,” as opposed to being administration heavy. “They’ve cut everything they have to cut in my view.”

“The funding formula is broken and needs reform,” Roen said. In his opinion, there just simply aren’t enough teachers, due to inadequate funding.

For the most part, St. Paul has voted for local levies. But relying on property taxes is “horribly unfair,” he said. “It’s a terribly regressive way of taxation. It’s not based on wealth, it’s based on property ownership. It’s not a smart way to fund public education.”