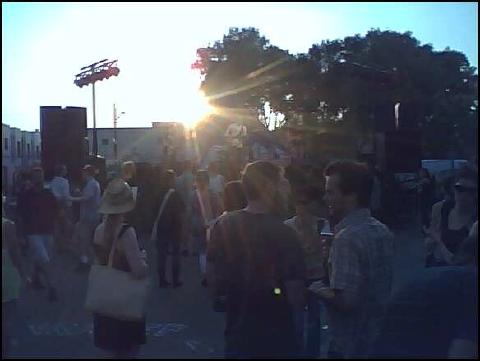 by Jay Gabler | 9/6/09 • Walgreens is already selling black and orange M&Ms, which means that the time is nigh when the Great Pumpkin will choose the world’s most sincere pumpkin patch from which to make his annual ascent into the autumn skies. If there were a toy-bringing phantom associated with summer music festivals—the Wristband Wizard?—he would surely have risen from behind the stage Saturday night at Clapperclaw, the Twin Cities’ most sincere summer arts festival.

Clapperclaw is an event for Minnesotans who like their theater pure of purpose, their music free of gimmickry, and their art hung on sheets of plywood. Their beer is that of the Common Man (tallboys of Bud and a specialty-brew tasting featuring nothing too much more exotic than different varieties of Summit), and their venue is a nonprofit arts organization in a converted garage.

The event was heavily promoted in mainstream media like Vita.mn and The Current, but the moderately-hip Rock the Garden masses who might have been as happy with Jack Johnson as with Yeasayer were nowhere to be seen at Clapperclaw. The irony (and this is a crowd that’s on intimate terms with irony) is that the entertainment at Clapperclaw was quite accessible. If you drove by Intermedia Arts and decided to skip Clapperclaw on the assumption that a crowd sporting an incongruous mix of bespoke suits, track jackets, hot pants, and BBQ aprons was likely to be listening to some freaky shit, you will be sorry to hear that the one music set I heard—by Someone Still Loves You Boris Yeltsin—was very easy on the ears, power pop with vocal harmonies and jangling guitars.

Overall, the event had the merry aspect of an alternate-universe State Fair—complete with free biodegradable tote bags (from Yelp.com). The only things missing were the (Pabst) Blue Ribbons.