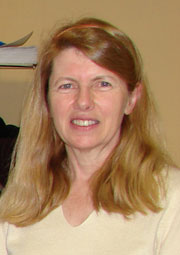 When you think of human trafficking victims, chances are, you probably think of women in far away places.  But the truth is, there are male and female victims in every country and every state here in the United States.  According to the US Department of Justice, there are between 14,000 and 18,000 victims in this country.  After drug dealing, human trafficking is the second largest criminal activity in the world and is also the fastest growing.

The Civil Society is one of a handful of organizations that provide support and assistance for human trafficking victims here in the Twin Cities.  The organization provides immigration assistance, a safe haven from their traffickers and assistance in health, language and transportation.

Linda Miller is Executive Director of the non-profit agency.  She and her small staff work tirelessly on behalf of victims who are often too scared to speak out.  “They can have very substantial problems.  Our victims come from all over the world and every ethnic group has a lot of peculiarities that we have to take into consideration when working with them.”

Miller says her organization has helped victims from countries such as Vietnam, Cambodia, China, India, Japan and Laos.  Some are victims of labor trafficking, others participated in sex trafficking.

One of the women Miller has helped is a 29-year-old sex trafficking victim.  The Japanese woman wanted to share her story with the Asian American Press, but only with the agreement that her identity not be released.  For the purposes of this story, we will call her “Elaine.”

Elaine was born and raised in Japan and now lives here in the Twin Cities.  She said her nightmare began when she was recruited to work as a hostess in a bar by one of her older female friends.  The bar was in the same building as a strip club.  “I trusted my friend and that’s how I got into the world of the sex industry.  Not long after that, I was trafficked by a group of Japanese mafia and that’s when my life changed forever.”

Elaine says at one point she thought her life was about to change for the better but her hopes were soon dashed.  While being trafficked, she became very ill and had to be hospitalized. She managed to tell her doctor what was going on and she says he helped her get out of the situation by releasing her early to escape mafia members.  She knew she had to leave Japan or her life would be in further danger, so she went to California.

Once arriving in the United States, getting help proved not to be easy.  “I was soon re-victimized by a woman who promised to help me get my life back together.  But she tried to traffick me once again.  What hurt the most was that she was Asian and she told me she was a survivor as well,” said Elaine.  Even though she felt hopeless and helpless, the 29-year-old continued to push herself to seek help.  Finally she discovered the Civil Society, where Elaine finally got the assistance she so badly wanted.

Miller says Elaine’s story is just one of many she’s heard over the years.  The social worker says each victim comes with a unique story.  “Every culture has something that traffickers use against them.  For example, in Vietnam saying anything bad about your employer is considered a crime.  Other common tactics from other countries include using the lower status of women, fraud, threats of bodily harm or telling family and friends false information,” added Miller.

Miller says her caring staff works hard to gain trust with those they work with.  She says frequently victims “don’t speak English and are usually confined to a very small space.  They often blame themselves for their situation, protect their traffickers and move frequently.”

What makes the situation even worse, adds Miller, is since most victims don’t speak English, they are unable to communicate with service providers such as police or social workers.  Victims are also often guarded by their traffickers and coached as to what to say if they are ever questioned.

Elaine says the Civil Society has helped her with her trauma.  “I believe the staff believed in me more than I believed in myself.  They treasure every person and you feel like you’re really cared for.  They make you feel important.”

Miller believes the key to stopping human trafficking is to empower victims to speak out, so they can warn others.  That’s exactly what Elaine intends to do.  She believes in her messages to others who have endured the same pains.

“Have courage, have hope.  Please do it for your life, because life is a treasure.  One victim of human trafficking can rescue another victim, who can then help rescue twenty more.  We have survived this horrifying experience.  We are heroes and heroines of the world.”

The Civil Society is currently looking for volunteers and interns to assist in their office.  If you are interested, please call 651-291-0713.  If you are a trafficking victim or know someone who is, call the organization’s 24 hour a day crisis line at 1-888-7-SAFE-24.