The study, commissioned by the City of Saint Paul, funded by Ramsey County and conducted by Wilder Research, conclusively showed that Saint Paul residents are most concerned about their ability to recycle more plastics, and wanted a recycling system that was more convenient.

With the expanded recycling plan, residents will be able to recycle plastic containers with a number 1 and 2, as well as 4, 5 and 7, in addition to the 1 and 2 plastic bottles they can recycle today. To accommodate this additional volume of recyclable material, in 2015 the city will transition from the blue bins to using wheeled, covered carts for collecting recyclables.

“I am pleased to announce an expanded recycling program for 2014,” Mayor Chris Coleman said. “Our plans are ambitious, but necessary for our community. The new program will be good not only for our environment but for our checkbooks, and will get valuable recyclable materials out of the trash.”

While the city’s surveys reveal that some residents are eager to add organics to the curbside collection program, the survey also noted that the city is falling short of the state mandates for keeping recyclables out of our landfills. In response, the city will also roll out a comprehensive educational initiative on recyclable materials, to ensure everyone in our community knows what is available to be recycled and how to do it. The city will use social media, mass media and other mediums to spread the message.

“This budget proposal is an important step toward renewing Saint Paul’s commitment to recycling and waste reduction,” Councilmember Russ Stark said. “In addition to adding more plastics, it puts us on a path toward curbside compost collection, which will significantly reduce what we send to landfills and incinerators.”

A collection system for organics will be evaluated in 2016, and in the meantime, other composting opportunities will be expanded and promoted.

To learn more about the upcoming changes to the city’s recycling program, visit www.stpaul.gov/recycleitforward. To review the survey results, go to the Summit Hill website homepage at www.summithillassociation.org and click on the link under “Issues”. 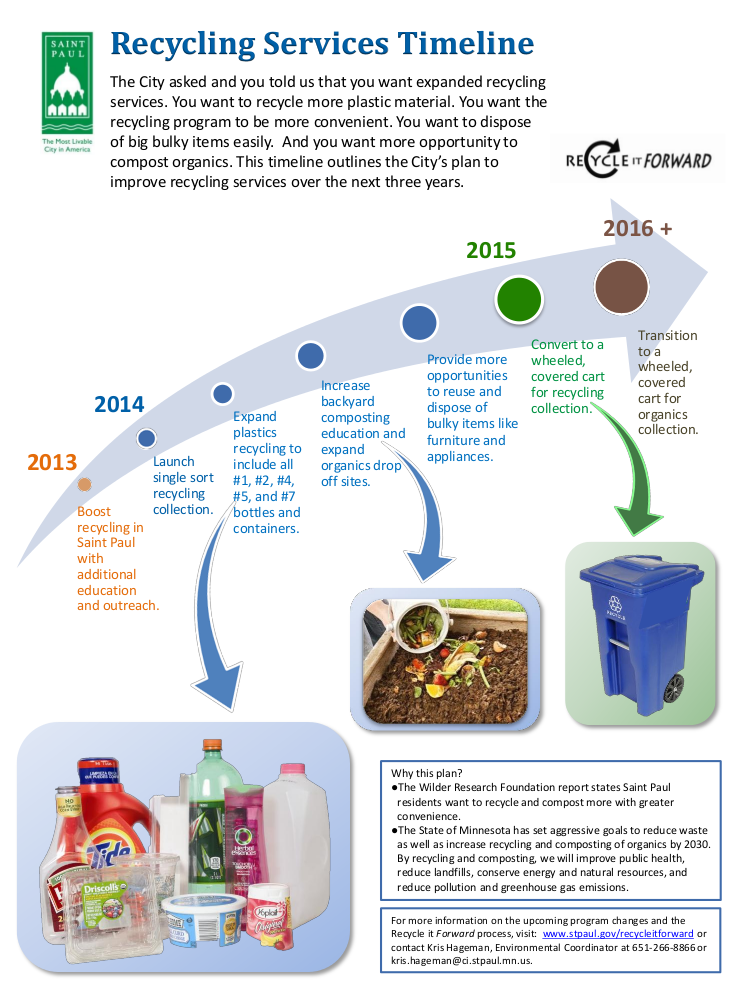