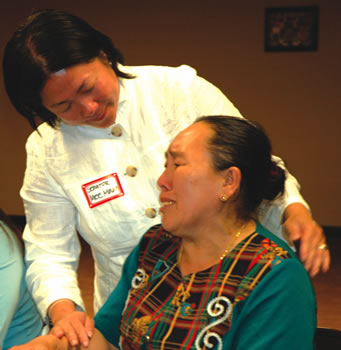 When his younger brother hadn’t immediately returned after making his last pizza delivery on the night of Sunday, August 6, Neng Xiong, 19, started to worry because his older brother Toua was usually on time.

The situation became dire after a police officer came to the Pizza Hut to inquire about a delivery made to a nearby residence on the North Side of Minneapolis.

“He came in to ask questions, but refused to give me any answers when I asked him what the problem was,” Neng recalled from that tragic Sunday evening. “That’s when I realized something was terribly wrong with Toua.”

Police say that after Toua had delivered the pizza to an address on the 2900 block of Colfax Ave., a group of men surrounded him as he was making his way to his car.

As Toua tried to run from the group, a witness told authorities that one of the men from the group raised a large, shiny handgun and fired one single shot into Toua’s back.

The resident of the home where Toua delivered the pizza came outside to see if she could help, but Qunisha Bishop, 21, was too late. After only a few whispered pleas for help, Toua stopped breathing. By the time the police arrived, Toua was dead.

“This is probably one of the worst killings in Minneapolis right now,” Bishop told reporters. “‘Cause he was innocent, he didn’t have anything to with anything.”

Reports indicate that the group of men who had confronted Toua fled on foot, apparently scared off by neighbors who had heard the shot.

Police dogs followed the scent to a nearby bush where witnesses say three men had momentarily hid. According to reports, a chrome .357 handgun was found underneath the bush.

Two days later, police arrested 20-year-old Jermaine Mack-Lynch and prosecutors have charged him with second-degree murder. Mack-Lynch is a convicted felon with an arrest for illegal possession of firearms and is a reported member of the Tre-Tre Crips gang, one of the three gangs that Minneapolis Police are targeting in a major crime sweep of North Minneapolis.

Police say a witness has submitted video footage of Mack-Lynch brandishing a chrome handgun only days before the shooting. Mack-Lynch admits to having a gun, but that he had given that gun to another gang member. He remains in jail awaiting further investigation.

This case in particular has awoken neighbors in the area to the fact that crime knows no racial boundaries. At a candlelight vigil for Toua, hundreds of concerned neighbors showed up to walk a mile-and-a-half from the Pizza Hut where Toua worked to his home where notables such as Mayor RT Rybak and Councilman Don Samuels gave quick speeches.

At a meeting held at the Urban League, members from the African-American community gave their condolences to the Xiong family.

Community activist Ron Edwards apologized to the family, saying that “no parent should lose a child to violence.” He went on to remind them, however, that the reality is that “we’re trying to get rid of crime in the black community as well.”

Rep. Cy Thao and Sen. Mee Moua were present for the meeting, with Rep. Thao residing as the interpreter for the family. Though both are from St. Paul, the two indicated that they were there to support the family in this time of need, despite being out of their jurisdiction.

Toua’s mom, Mee Vang, expressed her thanks to those who have reached out, but also criticized the police for being too late to save her son who was a “hard-working tax payer”.

Violent crime in North Minneapolis, everybody agreed, has been getting out of control. Doua Vang, a truancy worker from the organization Hmong American Mutual Association observed that this year has been the worst year he’s seen since taking the job four years ago.

“People are getting robbed all the time now, even in daylight. I have clients who are afraid to step outside because everywhere they turn they see danger.”

Toua’s murder is the 40th of the year in Minneapolis and the second murder of a Hmong in less than a month. However, unlike Fong Lee who was killed by a Minneapolis Police Officer, Toua had no criminal record and was considered an innocent victim.

Remembered as a hard-working, happy-go-lucky quiet guy, Toua loved cars and soccer. Aside from his job at Pizza Hut, Toua also worked at an area Chinese restaurant, delivering take-out food.

“Toua, or Tony as he liked to be called, was always there and never complained,” remembered Roger Thao who was Toua’s soccer coach while Toua was a student at North High School. “He was always one of the hardest working guys on the team, and whenever I asked him to do more, he just smiled back and did what he was told.”

A $25,000 reward offered by Pizza Hut is still in effect for the arrest and conviction of those responsible for Toua’s death.

Toua is survived by both his parents and his ten siblings. His funeral will be held at the Legacy Funeral Home in St. Paul on August 25 – 27.

A memorial fund has been set-up for him at:
Toua Xiong Memorial Fund
C/O US Bank
1030 West Broadway
Minneapolis, Minnesota 55411