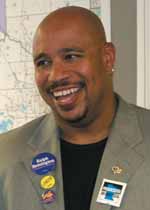 Once the head-scratching is done and you get your mind around the fact that new City Councilmember Ralph Remington pulled it off, you can’t help wonder a few things. Like, for openers, how this black man got the 80-percent white 10th Ward to trust him.

He is, after all, the first African-American to represent the ward at City Hall. Remington states, “This is one of the most progressive wards in [Minneapolis]. They’re not necessarily looking at race as a lone identifier. That’s the thing. In my campaign, it wasn’t about color. It was about what you’re saying. People are looking for somebody to believe [instead of] politicians and elected officials that are just talking garbage to get in the position. One thing I said, during the campaign is that there are two types of politicians. Those that want to be something and those that want to do something. I was running because I want to get in there and do something. That connected with people.”

You also have to wonder if this guy, who was the founding artistic director at Pillsbury House Theatre, actually is committed to community and not just to being in the spotlight. Turns out his activism went hand in hand with his theater career. As far back as the Philadelphia High School for the Creative and Performing Arts, where he was president of the student body, he led the student protest movement for better conditions, books and respect, culminating in a bargaining agreement with the school principal and the district superintendent. And protested against South African apartheid in Philadelphia and Washington, D.C. When he was 13, he worked for squatters’ rights, helping homeless folk to move into vacant houses in North Philadelphia. After graduating Howard University with a B.F.A. in 1984, he went into the Army. During the first Gulf War, he was an anti-war protest organizer for Vietnam Veterans Against the War. Doesn’t much sound like he ran for City Council on a whim. “I had no reason to leave the nonprofit world and run for office unless I was trying to [accomplish] something.

Says Remington, “I’ve always been politically active. All my theater was political. “Producing, directing [and acting] at Pillsbury House Theatre, it was socio-political theater. [Holding an] elected office is just an extension of that.”

It shouldn’t surprise anyone if he and fellow freshman Elizabeth Glidden over in the 8th Ward prove to be allies. Both were supported by Progressive Minnesota. Both attended Camp Wellstone, a weekend political bootcamp available to activists and folk who plan to run for office. “We came out of there,” Remington says, “and have been supportive of each other throughout.

“We find commonality on a lot of issues. We’ll probably be working together on a lot of policy.” Remington thinks such an alliance would be effective, and adds, “I don’t think it’s necessarily just us that’ll be teaming up and working together. There’s also Betsy Hodges [13th Ward] and Cam Gordon, who’s the only Green [party member] on the Council. We’re all of very similar ideology.” None of which means he can’t work with someone whose ideology he doesn’t share. “Oddly enough, I also have a lot in common with [likely Council President] Barb Johnson. We’re both supportive of labor.”

While living in L.A. in 2003, Ralph got hired part time at America West Airlines. And, as head of an organizing campaign, promptly brought the International Brotherhood of Teamsters in right behind him. “The conditions for the workers were really horrible. I organized the union at LAX. It was a national campaign and a lot of workers from across the country got together.”

He also thinks he’ll have accord with 5th Ward Councilmember Don Samuels, who’s black, but not known for working and playing well with African-Americans. There was, in addition to his conflict with Natalie Johnson-Lee and her husband, Travis, a conflagration with local activists Booker T. Hodges and Al Flowers, whereby Samuels swore out a restraining order against Hodges. Remington dismisses the notion, as advanced by Hodges and Flowers, that Samuels is a race traitor and says, “We should be happy that Don has a good relationship with [Mayor R.T. Rybak]. I have a good relationship with the mayor. That means, theoretically, we can get things done. And Don’s on the Northside. I’m on the Southside. It’s the first time it’s happened that you have a [black] Northside-Southside connection. I look forward to working with him.”

He is guarded in speaking about the Minneapolis Police Community Relations Council fiasco. The PCRC has farted around for two years, with no evident intent to address profiling and brutality, the two-pronged imperative that necessitated federal intervention in the first place. And things took a true turn for the worse when Carol White of African Americans Concerned Together busted the cops for throwing all that Generals Mills money at national, white crime expert Chuck Wexler, while Spike Moss and others were right here with the proven ability to deal with black gangs. Any confidence it left on that side of the table died when STOP (Strategic Tactical Operations Patrol) Commander Lt. Madiera Arradondo got yanked off the police council and was replaced by the song-and-dance team of Deputy Chief Don Harris and Lt. Larry Doyle. They tap-danced around accountability at the City Council’s Oct. 12 Public Safety and Regulatory Services Committee meeting better than Bojangles and Sammy Davis.

Remington comments, “As far as PCRC is concerned, I want to get in there and talk with some folks. And I can tell you about that at some other point.” He adds, “I’ve found out that a lot of things I thought from outside the system don’t look the same way now. A lot of supposition happens on the outside that, when you get in, you realize you didn’t have all the information. That doesn’t pertain only to the PCRC. Just in general, it’s different from the inside than from the outside, the political reality of [a situation]. The working of the machinery.”

He says he also plans to weigh in on the development issue. Part of his campaign ran on a commitment to “smart development.” What’s he going to do to keep Lake Street businesses from getting stomped into insolvency when the reconstruction moves across Stevens Avenue, threatening to strangle the flow of customers? “[The City Council is] looking at various ways [to] incorporate businesses’ needs, different methods.” He wasn’t at liberty, though, to get into specifics. A look at his website gives a bit more information. And Remington does go so far as to say that he’s all for development, just on a sensible scale.

Time, of course, will have to tell what impact Ralph Remington has on the Minneapolis City Council. One thing’s for sure. With his visibility, it will not take place in a vacuum. A full month before being sworn in, Remington literally was getting 50 to 60 e-mails a day from constituents. He didn’t dare answer his telephone. “People want to put me to work before I even get my first paycheck,” he half-jokes. “But, it’s good. That means they believe I’ll get the job done.”