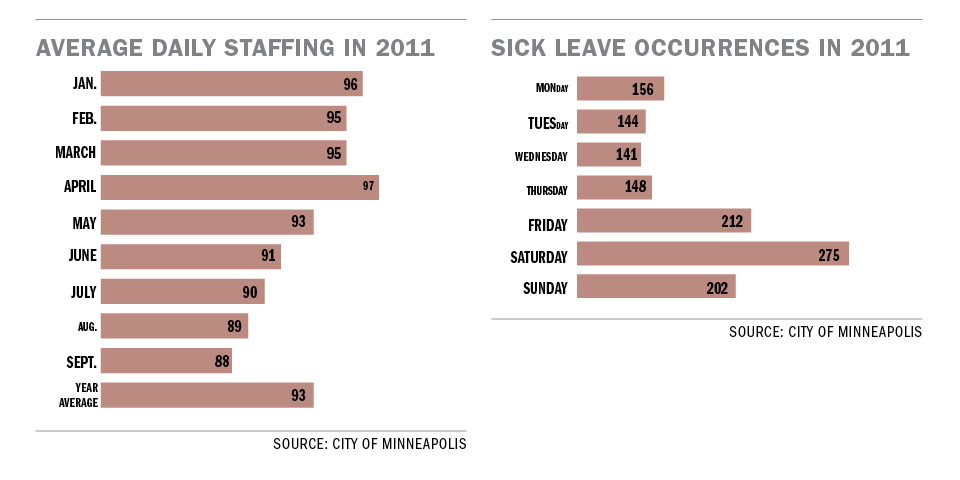 Data collected recently by the Minneapolis Fire Department and the city shows that the department’s sick day and time off policies cost the city nearly $1 million in overtime pay annually.

According to the data, firefighters take significantly more sick days and time off during weekends and summer months. They often take the same days off, which forces the department to pay other employees overtime to cover.

Several council members have said the hours of overtime pay are too high.

“There is something going on here other than people simply getting sick, and that needs to be addressed,” Minneapolis City Councilman Don Samuels said in an interview.

Facing another tight city budget, the council requested Fire Chief Alex Jackson compile a report showing the amount of time members of the fire department took off, when that time was taken off and which positions were taking time off most frequently.

Jackson first presented the report to members of the council Oct. 26, providing visible evidence for what has been a long-standing issue between the Minneapolis City Council and Fire Department.

“I think the firefighters and the union know that these numbers do not make logical sense and accountability will have to be an ongoing thing from now on,” Samuels said.

The department’s overtime pay has been increased because the employees who work overtime are often of a higher rank and therefore a higher pay rate.

According to the data, fire captains and fire chiefs made up a majority of those who worked overtime. Even when filling in for a firefighter, captains and chiefs receive their normal pay.

“Our staffing has dropped almost 100 firefighters in 10 years,” Lakosky said. “We’re cut so short, we just don’t have the [employment] base to draw from, thus creating overtime.”

Lakosky said that the department brought in a consultant to look over its employment system, and concluded that the fire department was stretched “razor thin.”

Jackson will present additional details of the report to various city council committees in the next month.

Samuels said he hopes the issue will be resolved and a solution will be implemented by the time the city’s budget is finalized in mid-December.

Hodges said the council is considering a policy change to require stricter sick day verification or hiring back laid-off firefighters.

Firefighters are currently allowed six sick days before they are required to provide verification of illness. Lakosky said that even days in which an employee provided verification were counted in the data.

“We do have some people that have used more sick leave than others, and has there been some more usage on a Saturday? Maybe. But the problem is the numbers are so skewed,” Lakosky said.

Samuels said that even if the council doesn’t make policy changes, the issue will improve.

“When you bring this kind of data to the light of day, people start acting differently,” he said. “I think right away we’re going to see a change here because we’re going to be reviewing this on a regular basis.”