Caprice McNeal, No Bullying Movement founder, Lisa Carter and KMOJ's Lisa Moy lead walkers around Lake Calhoun. The walk was in efforts to raise awareness to the problem of childhood bullying.

Close to 30 residents took a stroll around Lake Calhoun in efforts to bring attention to the issue of bullying.

The No Bullying Movement hosted its second annual Walk Against Bullying this past weekend. The event was the brainchild of Lisa Carter, who said she had a dream of someone being bullied and woke up and said she had to do something to bring awareness to the issue.

“I started doing research and was seeing how many kids were being affected by (bullying) and how so many were killing themselves, so I decided to design the t-shirts and wristbands (which most of the participants of the walk donned),” said Carter.

Carter, who has three sons, ages 21, 17 and nine said she talks to her children about bullying often.

“My youngest had an issue with being bullied by a neighbor,” said Carter. “I was able to talk to the child’s parent and resolve the issue. I tell my sons they need to be aware of how they treat others. You never know how your words can impact (others).”

Walker, Blayee Taye said he knows first-hand the impact of being bullied.

“When I first came to America I was bullied because of my accent,” said Taye, who as a child came to the United States from Liberia. “So when I saw this event was happening I wanted to participate. It’s a good cause.”

KMOJ radio personality and ambassador of the No Bullying Movement, Lisa Moy said the issue of bullying has been going on for years.

“We just used to call it ‘roasting’”, said Moy, who admits to being bullied as a child. “They (kids) laughed at my clothes and shoes, so I can relate.” 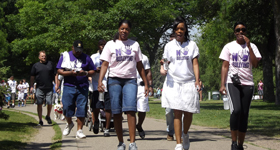 Left: Members of the El-Amin Basketball Assoc. participate in the Walk Against Bullying at Lake Calhoun.

Moy feels the problems are getting worse. “We have kids killing each other and kids committing suicide because of bullying,” said the co-host of the KMOJ morning show. “Especially in the African-American community, it’s something we need to bring attention to.”

Moy and Carter are working to partner with area schools to combat bullying problems.

“People shouldn’t get bullied for any reason,” said El-Amin. “I don’t see a reason for it and we should stop it.”