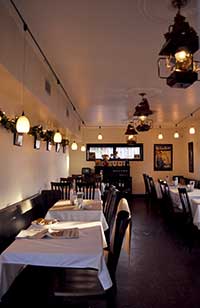 The café is especially romantic after the sun goes down and the candles are lit. (Photos by Victoria Turcios)

Once the sun sets, the candles come out at Citizen Café in South Minneapolis. The lights dim, creating a very romantic setting; it would be perfect for couples on Valentine’s Day.

The owners of the restaurant are a couple: chef Michael MacKay and his wife Seaen. All the food at the café is made fresh every day, which reflects their food philosophy. They don’t use preservatives or food enhancers. “We make and serve the type of food we enjoy and can stand behind with confidence,” the couple says, according to the restaurant’s website, thecitizencafe.org.

“It’s the only way I know how to cook and it’s healthier,” MacKay said. “I know every product coming in to the restaurant and it’s just the way I do my craft.”

Fresh food takes more time. The café’s ketchup takes three days to make, he said. MacKay uses 30 pounds of over-ripened fresh tomatoes, garlic and onion, stews it for half a day, then he lets it sit over night before mashing it up and adding spices. It sits another full day before its pureed and strained.

“I don’t try to be something I’m not,” MacKay said of his food philosophy. “I’m a guy from Chicago and I do cooking my way.”

I sampled three dishes: the BLT, the Roasted Shrimp and Bacon Fritters, and the Grilled Chicken Sandwich.

The chicken was, by far, the best of the three choices I picked to eat. The sandwich, $10, comes on Kaiser roll with ham, Swiss cheese and a tomato aioli, which is a condiment that is similar to mayonnaise, but fancier and usually includes an additional flavor.

The thick fillet of chicken was very succulent and had a light smoky flavor. The cheese was nicely melted and the bread was toasted, but not to the point of overpowering the texture of the sandwich a whole. There’s nothing worse than scratching up the roof of your mouth on hard or over-toasted bread!

The BLT (right) is made of hand-cut, thick bacon, lettuce, tomato and mayo on toasted brioche and costs $9. The sandwich was not a very big, but the bacon made up for that as it was very juicy and there’s a lot of it, so it satisfies.

Sandwiches come with the choice of side: fruit, house-made chips or chef’s choice. I was happy to try the savory house-made chips, which were well seasoned and their shape was intricate too.

Sauces at Citizen Café are made from scratch too. When visiting, do try the house-made ketchup; it’s got a total different flavor and texture than the stuff you’ve got in a bottle in your fridge. At first, the ketchup tastes too sweet, but once you get used to the flavor, it’s quite savory, and it compliments the chips really well.

The second plate that I ordered was the Roasted Shrimp and Bacon Fritters (below). Fritters are small, fried dough usually containing meat or fruit. This plate was quite a disappointment since $9 only gets you five shrimp, which were also burnt, overcooked and tiny. And then at one point I thought there wasn’t any bacon inside the fritters until I really looked for it and found a minuscule piece of bacon on each of the shrimp.

Even though the restaurant is small, its ambiance is very calm, vintage and homey.

The service is welcoming, courteous and attentive. The music is never too loud so you can still have a private conversation with your food buddy. And waiting for a table is rare.

I have gone to the restaurant multiple times because of the food and the service, even though some of the plates are not as well done as others, the food is affordable and the eating experience is satisfying.