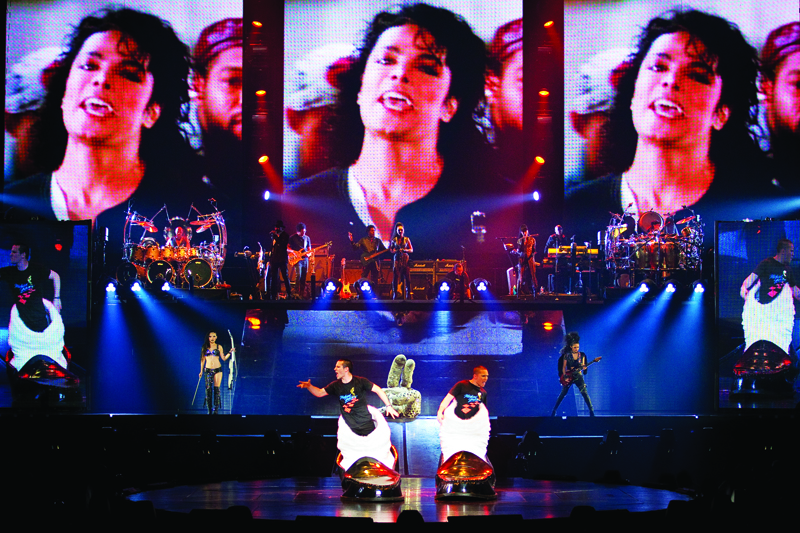 During intermission at Tuesday night’s performance of Cirque du Soleil’s Michael Jackson: The Immortal World Tour at Target Center, one of my neighbors leaned over to me. “Don’t you think it’s all a little creepy?” she asked. “It’s all, ‘I’m so lonely, and dead.’ And then there’s that monkey.”

I don’t envy the producers who had to create an unambiguously celebratory entertainment around the music and life of Michael Jackson (1958-2009), who was one of the great artistic talents in American history but was also deeply troubled and, not to mince words, weird. That performer in a monkey suit is there because Jackson had a monkey, Bubbles. He also had an amusement park, and the Cirque show gets a visit to Neverland out of the way early on. Children’s welfare was a signature issue for Jackson, but it’s an unfortunate fact that his legacy in that department is somewhat clouded by the fact that he had children in his bed as well as in his heart.

Jackson’s utopian ideals were a little cloudy in other areas as well, and in its second act the Cirque show demonstrates conclusively that both Cirque du Soleil and Michael Jackson would probably have done better to have simply steered clear of trying to make coherent statements about geopolitics. During “They Don’t Care About Us,” dancing robots appear with LED breastplates that first flash dollar signs amidst videos of urban and international violence, then display hearts as Mother Teresa appears onscreen to feed starving children. The number was originally designed for Jackson’s This Is It shows (performances that were preempted by the artist’s demise), so Cirque can’t entirely be blamed for its unseemly exploitation of human suffering for commercial entertainment. Of course Jackson would have seen himself as raising awareness, and Cirque doubtless think the same thing about the pro-Gaia number that unfolds as 30,000 people sip from souvenir plastic cups.

The Immortal World Tour is structured like a concert, with Jackson’s music performed in a kind of giant megamix while Cirque performers do their thing—”their thing,” in this case, only infrequently looking much like a conventional circus. Whether that’s a good thing depends on how much you value acrobatics versus choreography. Most attendees are probably looking for the latter, in which case Cirque gives them approximately what they’re looking for: something about as close to a final concert tour by Michael Jackson as it’s possible to get. That sounds great, and The Immortal World Tour occasionally is, but it also feels like an arena-ready adaptation of Waiting for Godot with Bubbles and a silver-clad Jackson acolyte as Vladimir and Estragon; and a giant pair of dancing loafers as Pozzo and Lucky. Everyone’s waiting for the King of Pop, and they’re going to go on waiting as long as Cirque keeps selling tickets.

The giant loafers are accompanied by a super-size silver glove that dances about without ever quite flipping the bird. I couldn’t help thinking of Hamburger Helper, and also thinking that the colossally weird glove was an example of where this show could have gone if the famously inventive Cirque producers had been allowed to get as conceptual and odd with this show as they have with productions like my favorite among the four Cirque shows, I’ve seen, Kooza. That might have been even creepier than The Immortal World Tour already is, but it sure would have been more interesting.

That might be the worst thing one can say about The Immortal World Tour: it’s just not very interesting. Michael Jackson’s estate permitted the show because Jackson himself loved Cirque (one might suppose they also did it for the money, but the robot number suggests that money is associated with war and riots and racists and fascists, so clearly remuneration was far from their minds), and if the Gloved One himself had been around to participate in something like this, it seems certain that it would have been weirder and more wonderful. Besides being a consummate performer, Jackson was a master of visual spectacle—including music videos, some of which are excerpted in the Cirque show and might cause one to wish that the show was simply an Imax-size YouTube playlist of Jackson’s greatest hits.

As it is, he’s gone and we’re left with a host of world-class dancers who execute his signature moves, play his hits, shill for his vaporous causes, and remind us that however well they can moonwalk, there was only one Michael Jackson.