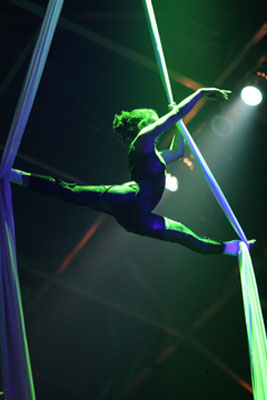 “You wouldn’t catch me dead in this place,” Travis Curren said, reflecting on his attitude at age 14 toward Circus Juventas. But the magic of the circus, its irresistible allure — plus the fact that he could cut his court-ordered community service time by more than half if he served it under the auspices of the circus school — changed his tune.

Now, five years later, whoever that troubled youth was no longer seems present in the young man who smiles widely and jokes with confidence while he talks about his experiences with Circus Juventas.

Located in St. Paul’s Highland Park neighborhood, Circus Juventas, a nonprofit youth performing arts circus school, seeks to instill in youth the very qualities present in Curren and his other colleagues. Through its focus on discipline, hard work, and mentoring relationships, students gain self-confidence and a greater appreciation for the artistry involved in the physical demands of circus acts.

Curren, who lives with his grandmother in St. Paul and is starting his second semester of college, thrills the audience as he performs acrobatics on the Russian Barre, but what is truly amazing is his work as the catcher in the trapeze act.

“I had a fear of heights. I wouldn’t even go up these stairs and look down,” Curren said, gesturing to a two-storied wall with a set of stairs hugging the side inside the tent-like building of Circus Juventas. Regardless, his coaches still encouraged him to try the trapeze, eventually graduating to the role of catcher. In other words, Curren is the one the other trapeze artists depend upon to catch them as they leap through mid-air with only faith that the catcher will stop their fall to the net far below.

Curren credits one of his coaches, Matt Braddock, with providing him with the special attention that is often lacking in other relationships. “I can go to my coach with a problem, even a personal one, and get the help I need,” Curren said.

Already a veteran with performance, after filming a show in 2002 with Dragonfly TV that was broadcast on PBS, Alex Edwards, 17, and two others from her gymnastics team attended a Circus Juventas show.

Impressed enough to join the troupe, Edwards, an only child who lives in St. Paul with her parents, credits the casual, team-spirited atmosphere with helping to create the confident young woman who performs in a half-dozen different acts as well as playing the part of Servant Girl in the Circus’ currently running show, Pazzanni. This year’s presentation follows the story of a young Italian girl, Zola, who finds herself transformed by the creations of a mask-maker.

“Here is different from anywhere else,” Edwards said. “Everyone knows you.”

“Being able to overcome stuff that’s scary” has been Edwards’ reward for the hard work she’s put in learning such skills as the Flying Trapeze, Silks, and Double Cloud Swing. “And I have a closer relationship with the coaches” than with her teachers at Central High in St. Paul, she asserts.

Curiosity piqued after enjoying the Circus’ 2004 performance of Swash!, Jesse Mandell-McClinton, 16, decided to try his hand at all the cavorting on stage as well as in the air. Mandell-McClinton discovered that “It’s very dangerous. Safety trumps all here.” But it’s within the limits of safety that Mandell-McClinton has excelled.

“If I’m struggling with something, they pull you up to make you better rather than push you down. I’m definitely different here than at school,” Mandell-McClinton said. “Here the atmosphere is so open that it feeds right into my personality,” he explained.

As Mandell-McClinton has learned the Teeterboard and Bike, among other acts, he’s become stronger, more flexible, and confident. “The line between what you can do and what you want to do is blurred,” he said. Circus Juventas helps youth take their dreams and make them a reality.