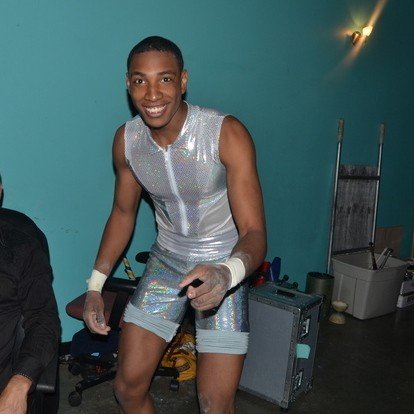 Eighteen year-old Freddy McConnell from Bloomington is a high school senior at Cyber Village Academy in St. Paul and a performer at Circus Juventas, a youth performing arts after school program teaching students anywhere from ages 4-22 circus skills. Each year, they hold their annual spring shows before their premiere summer shows in August.

In a Q&A with the Twin Cities Daily Planet, McConnell talks about performing in Circus Juventas and how the values he has learned there have helped him in his everyday life.

Twin Cities Daily Planet: How long you have been performing at Circus Juventas?

Freddy McConell:  I’ve been performing for Circus Juventas for five years. This is my fifth and final year.”

FM: I had an act called double trapeze. Where you’re on a bar and there’s a catching lock…we do a bunch of tricks like holds, she’s upside down, I’m upside down.

Tonight was trapeze and next week (May 7-9) I’m in the Purple Show  and will be doing the Adagio. The Adagio is like cheerleading without the cheer. You’re not cheering but you’re doing throws, sort of like acrobatic dancing.

I’ll also be doing low-casting, which is kind of like trapeze but the catcher which is me, I won’t be swinging, I’ll just be stationary and kind of just rise up.”

TCDP: Besides Circus Juventas, have you been a part of any other after school programs?

FM:  “I’ve also been a part of ThreeSixty Journalism for five years; [this] is my fifth and last year. The program has helped me with English, in school; it’s easier to write essays. I had a 10 page essay and I finished it in like 30 [minutes] to an hour, in time. I’m really serious about it too so it’s also opened a door for me with people: talking to people, meeting new people, making new connections, so it really helps with being…a person who can easily communicate.

It doesn’t matter who you are, I’ll go and talk to you. I’m not shy anymore. Coming into Circus Juventas I was shy [and] coming into ThreeSixty Journalism. When you look at the path and what I’ve been through, I started from there and now I’m here. I’m really thankful for those two organizations and they’ve played a major role in my life.

TCDP: I know you take pride in your ethnic heritage, can you please explain your background?

FM: “Well my mom is Boricua, that is Puerto Rican, and my dad is African American. Our family has a variety of different races but those are the two I consider myself.

I also identify with not just my Puerto Rican side but my African American side. I’m very proud of both ethnicities.

TCDP: After the Circus Juventas spring show what will you be preparing for next?

FM: After the Spring show we have, really, a three week break from training. Our primary focus is the [summer] shows.

“Summer’s coming up and school will be out. Everybody is going to be focused on 101 Arabian Nights. Arabian Nights, is basically the original Aladdin story. Disney, you know, kind of mocked it a bit, but the Arabian Nights that Circus Juventas will be doing is on the real deal.

“If you ever seen Disney’s Aladdin you will definitely see similarities.”

TCDP: What will your role be in Circus Juventas’s 2015 August Show 101 Arabian Nights?

TCDP: What keeps you coming back to Circus Juventas?

FM: I love Circus Juventas because it has pushed me to be successful and it has challenged me and I love challenges. Coming in I was kind of like, ‘this may be too hard’ I kind of hesitated to strive and continue to do what I do. But now you throw a challenge at me, I’m not going to say oh, that’s too hard, I’m just going to do it. Circus Juventas certainly pushes you to do tasks; it’s definitely a big commitment, hard work.

Everyone is really sweet [and] supportive, and then you’re going to your times where everyone can get a little antsy, and it’s theater, it’s a theatre based school, circus theatre. But during those times you just don’t even think about the bad times or whatever. You just think about everyone’s here to support each other. It’s hard work, but in the end it’s all worth it. The audience is all smiling and the audience is enjoying the show.

Check out a video of Freddy performing here