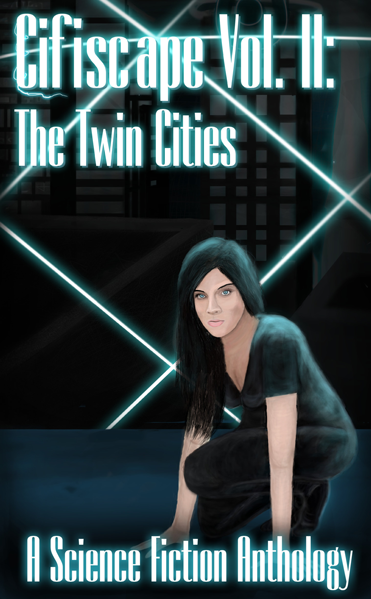 Truth be told, not all literary events are great. (Don’t tell anyone I said that, okay?) The Twin Cities are awash in more literary events than types of hotdish. And like those neighbor-brought delicacies, not all of them go down smooth. It is for this reason that I feel extremely lucky to have attended not one, but two excellent shindigs this past weekend, and I was able to show off to an out-of-town friend how awesome our fair city is. Saturday night was an amazing night for neighbor-cooked literary casseroles.

First stop was the University Baptist Church to celebrate the launch of Cifiscape Volume II: Twin Cities, the second (obvs) in a series of science fiction anthologies that focus on the future of the Twin Cities. I came across brothers Kit and Jeffery Martin, the minds behind Cifiscape, at the Bloomington Writers’ Festival on March 24. Their table, Onyx Neon Press, mainly housed technical books but also featured a galley of their forthcoming science fiction release. Though neither Kit nor Jeffery are fiction writers by trade—Kit writes the tech books for Onyx Neon while Jeffery designs both those manuals and the Cifiscape books—they explained to me that they started this project on a whim with nothing more than a desire to see what would happen. As it turns out, they’ve stumbled across a really interesting niche that ought, logically, to appeal to a great number of locals. While we may not all share a taste for genre fiction, everyone in Minneapolis and St. Paul at least have geography in common, and for that reason this series should be a hit.

While the launch was more or less sparsely attended, despite my first Art Hound appearance (for everyone who didn’t show up, I hope you’re jealous of how much awesome pizza we ate without you), those who did show were genuinely happy to be there and extremely supportive of the project. Sure, it was a little counterintuitive to hear people reading sci-fi in the confines of a church, however—whether intended or not, though I suspect the latter, as the space was donated by one of the contributing authors who is also a pastor at the church—the setting added an interesting dimensions to, well, these other dimensions.

Though all the readings were fantastic and well done, by far my favorite part of the night was when illustrator John Beckmann—whose Cifiscape submission is entitled Zombielzebub: Hell’s Invasion—put on a five-ish act play with his wife and daughter, that ended with Beckmann hammering a demon baby out of his wife’s hunchback. Amazing.

Next, my high school friend and I headed over to the Mizna release party at Open Book. As I wrote in last week’s column, I had been looking forward to this event for some time, and it did not disappoint. We arrived a little late—in the middle of a Skype interview with Maimouna Alammar, an author from Syria who is currently, like many of the revolutionists in Syria, in hiding. Though it was a little difficult to hear exactly what she was saying at all times (some segments of the discussion were translated for us, and other times she spoke English), the experience, for me, was one of gaining understanding and a greater perspective about the current atmosphere in Syria.

In fact, the whole night was like that. Being so separate from anything akin to what has been going on since last year’s “Arab Spring,” hearing these authors read their own work and the work of others (some going by pseudonyms) brought to me, through art, a different understanding of what’s going on in the Middle East. Although every piece read that night was fantastic and touching, my personal favorites were the poem “Libya from New York, September 2011” by Leila Tayeb, a Libyan-American scholar of performance and politics, and the essay “The Eye Will Resist the Awl” by R. Abusahan, a Lebanese-American writer, health care professional, and beekeeper.

I am really encouraging people to pick up both of these compilations because they are full of fantastic writing for the light and heavy parts of the soul, and—not to put too fine a point on it—have to do with our collective future.