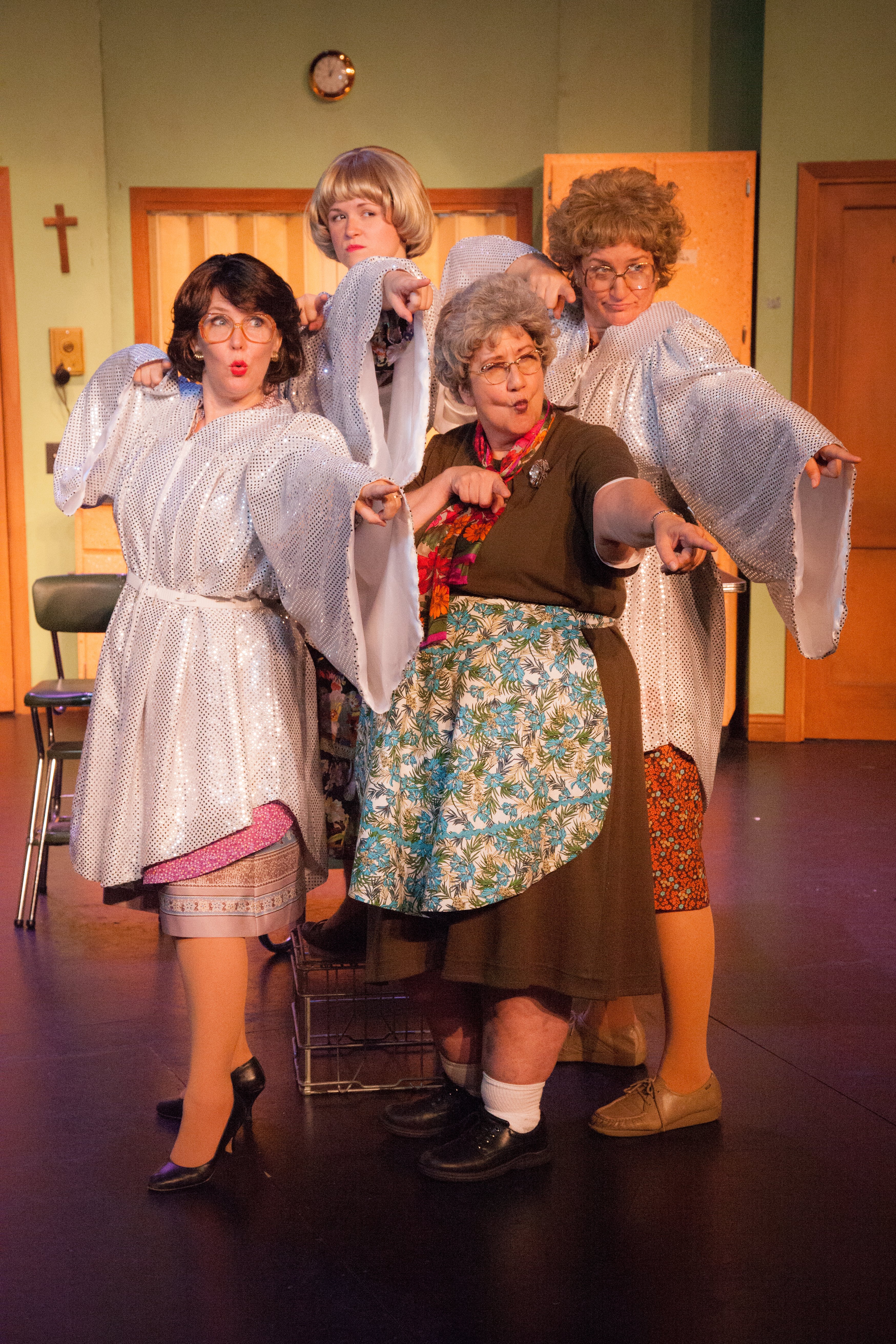 Inspired by the book Growing Up Lutheran by Janet Letnes Martin and Suzann Nelson, the original Church Basement Ladies premiered in 2005. Since then there have been four sequels, all produced by Troupe America Inc. and premiering at the Plymouth Playhouse. The highly successful musicals have all gone on to tour nationally, and continue to be performed at theaters across the country.

With the premiere of The Church Basement Ladies in The Last (Potluck) Supper, written by Greta Grosh with music and lyrics by Drew Jansen, it is time to say goodbye. The ladies’ church has run into financial difficulties and a decision is made that there is no choice but to disband the congregation. The show begins with a centennial celebration set in 1979 and ends with an auctioneer selling off the church inventory to pay the final bills—but a mysterious bidder has the audience wondering if there is a future after all for the church and its hundred years of memories.

Much of the show consists of flashbacks going as far back as 1897 when the congregation was voting whether to hold their services in English and deciding it was time for the women and men to sit together in church. There is also a flashback to 1944 when Mavis Gilmerson (Greta Grosch) shows up at the kitchen offering her assistance to Vivian Snustad (Janet Paone), who has ruled the kitchen with a wooden spoon for years. We also meet Karin Engelson (Dorian Chalmers) in 1952 who is complaining about her young daughter Beverly (Tara Borman). Beverly’s growth from this young girl to the teen who is confirmed in A Mighty Fortress is Our Kitchen, is married in the original Church Basement Ladies, and is a very pregnant young mother in the final show has really marked the years for these shows.

One thing that I found difficult with this show—and an earlier installment—has been keeping track of the timeline. Since the first show, which took place in the year 1965, the story lines have jumped forward and backward at alarming speeds. Using flashbacks occasionally can work to fill in missing pieces, but jumping among decades on a regular basis can cause difficulties for some audience members. Being Catholic and not knowing the Lutheran church calendar has put me in total confusion at times. For others who can let go of small details and just sit back and enjoy, this is no problem at all. The jokes that work the best do so in any decade. This is pointed out during the flashbacks when Mavis mentions that “I think I was wearing the same dress!” and Arlene continues to bring the same hotdish for over 30 years.

At the performance I saw, the Pastor (plus Clive the auctioneer, Grandpa Nokleby, Arleen, and others) was played by David Carey. He did a fine job, but I was disappointed not to see Tim Drake, who is listed in the program as the Pastor. Drake, Grosch, Paone, and Chalmers were in the original cast in 2005 and they have appeared in every production. I believe having these familiar faces has contributed to the success of the franchise—I really feel like I am coming back for another serving of hotdish each time I attend a show. Grosch continues to bring her Lucille-Ball-like slapstick comedy to her portrayals, but Paone steals the show this time. Her comedic timing and facial expressions have the audience laughing with her—but in this story it is her realization that this is the end of the church that her great-grandparents helped found and where her family celebrated all of the milestones of birth, marriage, and death for a century that really touches the audience.

As the ladies slip back into the basement to say a final goodbye, there were many audience members wiping tears. We can all relate to the heartache of saying goodbye to familiar people and places, and this is really what this show is about. The final song, “We Move On,” does a wonderful job of ending the show on a positive note and reminding everyone that memories live on and when one door closes another opens. I applaud Troupe America for knowing when a story has run itself out and it is time to close. Lovers of the Church Basement Ladies will not want to miss this final act.

Read Jean Gabler’s reviews of previous Church Basement Ladies productions Away in the Basement (2009) and A Mighty Fortress is Our Basement (2011).