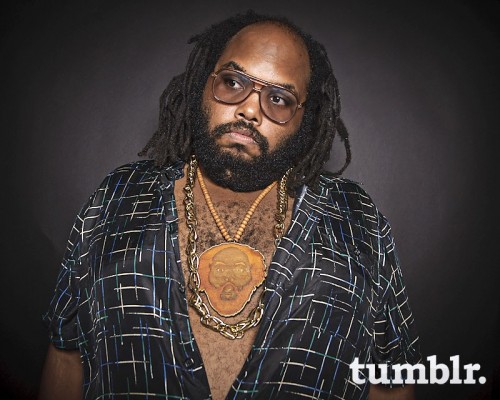 Chris Cloud is a man of execution. While others dream up plans that rarely go head to head with reality, Cloud rarely leaves a thought uncharted. Luckily for us, almost every thought the man has is golden and harmoniously in line with current trends in media and technology. Known locally as a creative “thinkdoer” and dubbed “a creative revolutionary” by the likes of Fox 9 News, Cloud is a dude who gets shit done. With a canon of skills that include “anticipating cultural trends rather than passively waiting and reacting to them” and “lacking a fear of failing,” Cloud is the epitome of proactive. Put Chris Cloud on a problem and he’ll have it solved, marketed, branded and have already thrown a killer party for it faster than you can say, “Help me, daddy.”

Cloud co-founded MPLS.TV, a Minneapolis based content network produced by an independent Do-It-Together collective (yes, the very collective that brought us the deliciously entertaining “What the F**K are You Wearing?“), and MPLSzine, a submissions-based collaborative digital publication now taking submissions for its 7th issue. The dude is nothing short of a powerhouse of productivity and overall coolness. If something awesome is happening in the Twin Cities, chances are Cloud is behind it. That’s why it’s no surprise that his latest endeavor not only is rad, but will have us all helplessly glued to his every creative movements throughout the year.

Released as an alternative to your typical humdrum New Year’s resolution, Cloud’s 13 Collabs is a 2013 yearlong initiative to collaborate with a baker’s dozen of artists he’s been eager to create with. The list includes local and locally-connected heavyweights like illustrator/designer Adam R. Garcia, yarn-bombing street artist HOTTEA and master video manipulator Matt Visionquest. Matches made in artistic heaven. Let’s put it this way, if the creative world was a game of dodgeball, Cloud would never be picked last.

I caught up with Chris Cloud to chat about the project and why 2013 is the year of the collab.

New Year’s resolutions. Nearly everyone makes them; nearly everyone breaks them. What inspired you to enter into the year with the 13 Collabs initiative as your artistic resolve?

The artists on your collab wish list include a handful of amazing and eclectic local and non-local talents. Tell us a little about your 13 picks and why you chose them. Were they all initially game to collaborate?

This came together rather quickly. Around the first of the year, I had posted on Facebook that one of my resolutions was to work with others on one-off projects instead of the longer form work I have been doing. I’ve been meaning to collaborate with several of these chosen artists for while, in some cases for years. I was on the bus contemplating about how I could encapsulate all of the work that could come from collaborating and 13 Collabs was born. All of the artists chosen are people I know and having been wanting to work with for awhile. The thing I considered most was my desire level to work with them. The second thing I considered, or imagined really, is what we could create. One thing that binds all these artists besides them knowing me is that they are multi-disciplinary artists. For example, Adam Garcia is a designer and illustrator but also has a background in music. Holly Newsom is known for her incredible work in Zoo Animal but also has been known to dabble in comedy. Brad Ogbonna’s primary focus is photography but he also wrote/published a book and has his own clothing line. I could have easily sent an email saying I wanted to collaborate with them. I didn’t. I made a public yearlong commitment to collaborate and create by making a curated list/website of the folks that have been on my target list to collaborate with. The response from the artists and my friends/family has been super positive. I’m pumped to see what magic we create together.

Are there any details you can share about your first collaboration or future ones?

The goal is to do as many of the collaborations in person, if possible. Seven of the artists currently live in the Minneapolis area, three are in New York City, one is in Baltimore, one is in Portland, and the last one is in San Francisco. Almost all of them have Minneapolis roots though. The collaborations will happen when the times are right for the parties involved. We all have other things focusing our energy on. The best way for people to keep up to date with the iniative is to follow 13collabs.com or follow @ChrisCloud on Twitter.

Did you give yourself any specific set of guidelines as far as the project is concerned, like collaboration time constraints or project size restrictions, or are you just going to play it by ear?

The biggest thing with this initiative is that it’s very open ended, unlike a lot of the work I help make happen. I don’t want to put these collaborations in a box. Just because Matt Visionquest is know for mindblowing, life-altering visuals and video doesn’t necessarily mean our collaboration will be video centric. The focus of this initiative is to challenge myself and the artists to collaborate on one-off projects. I do always keep the door open to exciting longer term creations and project though. It’s the best way to live, really. I do want to try and document as much as the behind the scenes process as possible — from conception to execution. It would be very exciting to compile everything somehow in 2014, whether that be a phyiscal catalog of the project or an event showcasing the collaborations. That is all to be determined.

Past or present, who or what would be in your top collaborations of all time?

I’ve loved working with Dan Huiting to develop the City of Music series. His talent, along with the other team members involved, really helped made the concept what is today and where is it is today, on Pitchfork.tv. Working with Matthew Jacobs on Forever Young, a late ’90s to early ’00s dance party, has been beyond my wildest dreams. We threw a prom that was attended by 800 people at First Avenue in May 2012. That was surreal. I put up stickers of my face that Marie Jeanne Dupuch created all over America as part of a project called “Where’s Cloud?” I’ve always been inspired by street art and it was great to contribute to those communities. I think some are still up in Los Angeles from 2010. There are two currently up in Minneapolis but I’m not saying their whereabouts.

Besides the 13 Collabs initiative, what other creative projects are you tackling in the coming months?

As part of the MPLS Collective, I’m working with an amazing team of collaborators to grow MPLSzine into something really special and needed in Minneapolis. We’ve published five issues so far and have exciting plans for 2013. I’m working with another team of super talented music lovers to build Culture Castle, a fortified stronghold of music, art, and ideas that when launched will be a content platform centered around music culture and the community surrounding it. In addition to Forever Young, I’ve been throwing a monthly ’90s alternative music night with Mason Butler called The Edge (this Thursday at Club Underground) and I have an untitled emerging music dance party in the works with a Minneapolis DJ that goes by Foolproof that I’m stoked about. On top of all the collaborative projects, I’m going to try a crack at making some multi-disciplinary art like the Up and Down Project where I ride every public escalator in Minneapolis and document it. I truly believe that 2013 (and beyond) is the D-I-T (Do-It-Together) Era. I encourage everyone this year to reach out to others in their circles and collaborate on creative projects. I’m always open to hearing about your collaborations or opportunities to collaborate and can be reach at chris@13collabs.com.

Also in the Daily Planet: read Jay Gabler’s 2010 interview with Chris Cloud for the “Who is that?” series.