I’ve noticed that people in the food business like to talk about food. The thing is, they also like to talk about music, and painting, and design, and film, and literature. You scratch a chef, you find an artist. So if these people are artists in some other medium, why do they end up in the kitchen?

I have one theory. Let’s say you’re making a film, and you spend five years and many thousands of dollars to make it, and then it’s ready to “serve.” You tell people it’s done, and they say, “Oh, finally. Can I watch it on YouTube or something?” (This is just a random example. I’m not bitter, really.) See, no one says that to a chef. In the food business, you create your work, you tell people how much it costs, they pay you that amount, and everybody’s happy. 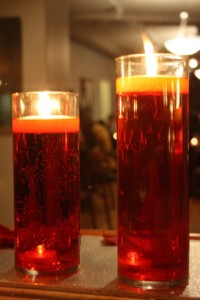 I know I’m oversimplifying, but there does seem to be a better chance of remuneration for culinary works of art than for your deeply moving collection of self-published poetry. Many creative people, apparently, enjoy finding an outlet that promises a modicum of payback. Today’s case study is of two irrepressible creative types who have been writers, arts-world gurus, and music aficionados: Heidi Andermack and Amy Brown of Chowgirls Killer Catering.

I chatted with Heidi after attending the Chowgirls’ “Locavore Love Affair” on Valentine’s Day, a five-course dinner at their “Parlor” in NE Minneapolis. Contrary to what I just said about remuneration, I went to the dinner because I got in free. They invited me and other food writers in the hope that we’d write something nice about them; actual customers paid $75 per person.

I’m now writing something nice about them not because of the payola but because the dinner was great and the Chowgirls are super fun, although I knew that already from having been at one of their catered events last year. I was like, why are these catering women so cheerful? Don’t they know that catering is the most hellish job on earth? They didn’t seem to be aware of their miserable fate, and the food was fantastic. That piqued my curiosity. 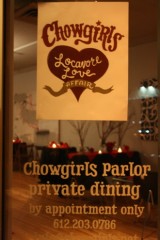 That, and their clever name. “In 2003, Amy and I had been tossing around the idea of starting some kind of food business,” Heidi told me. “We thought, if we’re really going to do this, we need a great name. We tried a few things — Chow Baby, no…Chow Chicks, maybe…and then — boom! Chowgirls! We dashed off and registered the domain name. We knew that having a cool brand was going to be crucial, and we knew we were onto it right then.”

Amy’s brother, Nathan Brown, is a graphic designer (and potter and musician, and is considering starting a restaurant — see what I mean?), so he designed the website. Heidi’s husband, Chank Diesel, is a font designer and painter, so he and Heidi picked the fonts. Heidi, as it turns out, is a writer. She and Amy, who — you’ll never guess — majored in creative writing, wrote the copy. Their website both highlights and downplays the Western theme implied by the name — just the balance they were looking for. 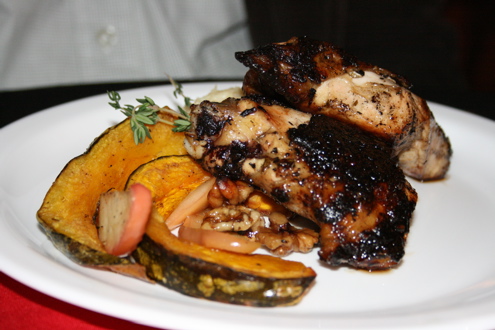 Before she was a Chowgirl, Heidi was a regular-type girl in a Detroit suburb. Her grandmother worked as a caterer and brought home adventurous things for Heidi to taste. In high school (the same high school attended by Madonna, its only claim to fame) she became a person who, unlike her suburban peers, thought that such oddities as sushi and feta cheese were not stinky and weird, but intriguing and delicious. She liked to hang out in downtown Detroit and listen to music. She majored in English. She experimented with getting the hell out of Detroit: Chicago? Seattle? But the Twin Cities won her heart, largely because she was into the music scene here; this was the era of the Replacements, Soul Asylum, the Jayhawks. (She’s 42, in case you’re trying to do the math.) 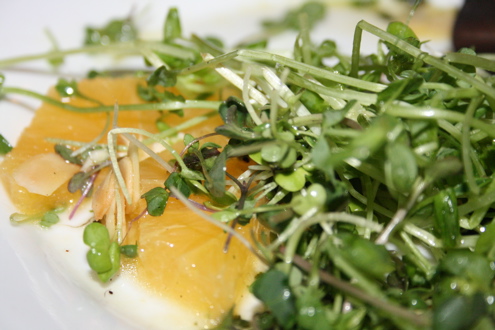 “I immediately felt that the art and music scene was comfortable and welcoming,” Heidi recalls. “And the co-op scene was very cool, which was rare in the ‘80s. I also really liked the fact that people could go to fancy restaurants in jeans and a t-shirt, and nobody got kicked out. It felt like a laid-back place to live.”

She thought she was coming here to be a writer. Her aspiration was to write for CAKE, an alternative music paper, so she could legitimately go to every single concert at First Ave. She did do some writing for CAKE, and that’s where she met Chank, who was CAKE’s creative director. She got caught up in the art world, becoming a mover and shaker in the NE Minneapolis Arts Association. Her first real paying gig was for MPR. 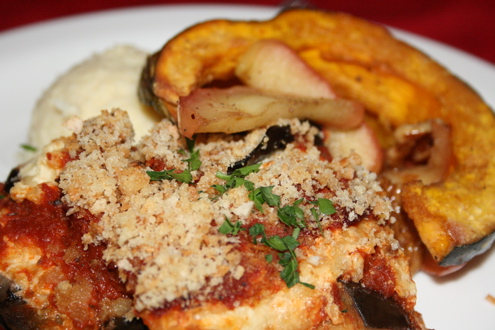 “I saw an ad for a part-time fundraiser at a public radio station,” says Heidi, “and I thought, hey, looks better than waitressing. I’d worked at my little college radio station, so that was my image of ‘public radio.’ I had no idea that MPR was this gigantic empire.” She got upgraded to the marketing department, where she stayed for five years. She credits former MPR chief Bill Kling with inspiring her to be entrepreneurial; she learned that marketing might well be an outlet for her creative urges. 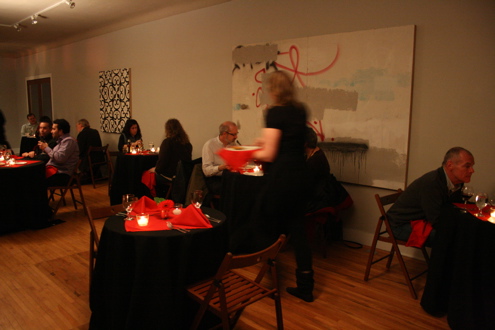 The Chowgirls rotate the local art on the walls at their NE Minneapolis Parlor. These pieces are by John Alspach.

In the meantime, Amy and Heidi had become fast friends. Amy had been working for Random House as a marketing rep, traveling far and wide from her native Paducah and alighting in Minneapolis. They first met on the day after Amy gave birth to her first child: Heidi and Chank had met Amy’s brother Nathan on a trip to Paducah, and when Nathan came up to the Cities to greet Amy’s new baby, he told Heidi, “Hey, you guys should meet each other! Amy won’t mind if I bring you over to her house, even though she had a baby yesterday!” Surprisingly, they all hit it off and no one got mad. 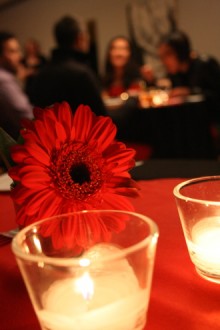 Amy and Heidi found that they were both talented cooks, and they liked to brainstorm ideas for a food business. The publishing industry was beginning to tank; Amy was getting worried about her job. If there was a time to cut loose and start their own business, the time was now.

“We thought about a restaurant, or a retail business selling jams and aprons and things, but we figured that with catering, we could just go ahead and do it with no overhead,” Heidi says. “What did we have to lose? I’d made 300 spring rolls for Chank’s art opening, so I had some experience. We were fearless, really. We just loved cooking and experimenting with new dishes.”

They threw a party for their friends in the arts community, and suddenly people were referring to them as caterers. Their first paid Chowgirls job, to their amazement, was a swanky reception for award-winning architect Wynne Yelland, given by Minneapolis-St. Paul Magazine.

“We didn’t have any servers, so we asked Chank’s design intern if she and her friend would do it,” says Heidi. “They were these glamorous, exotic-looking Czech women, chatting in a mysterious foreign language. Somehow this added an air of sophistication that impressed everybody. And we did an impressive job with the food, too.” 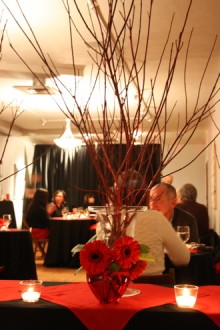 Eight years later, they’ve gone from two borrowed servers to a staff of 15, and they hire up to 60 more people in the busy season. Now Heidi and Amy spend so much time running the show that they don’t get to experiment with cooking as much as they used to. At events like the “Locavore Love Affair,” however, they can give vent to their creativity. They’re big on local and seasonal food, and they like the challenge of taking what’s available and making something delicious. Sunchokes, for example.

“I hadn’t had sunchokes till last year, and then I saw them popping up at co-ops,” says Heidi. “Part of the adventure of going with local food is that it challenges you to stay within the constraints and see what you can come up with.” The soup course at the Valentine’s dinner was a sunchoke bisque from Harmony Valley Farms in Wisconsin: a plain-looking but intensely gratifying puree that tasted like artichokes crossed with kohlrabi in a creamy, tangy base. 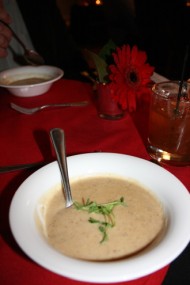 Other courses relied on cheeses from Shepherd’s Way Farms in Nerstrand, microgreens from Bossy Acres in Minneapolis, squash from Featherstone Farm in Rushford, pork from Pastures A Plenty in Kerkhoven, chicken from Callister Farm in West Concord, and garnishes from other nearby purveyors. The vegetarian entree choice, however, was made from faraway eggplant — with local cheeses. The Chowgirls aren’t purists; they’re sensible.

“The food industry is in the midst of an evolution,” Heidi says. “We started Chowgirls with a commitment to organic, non-processed, sustainable food that was also approachable and not — well, not snotty. Now these things are becoming more common, at least in the circles we travel.”

There’s a bit of the food evangelist in the Chowgirls. They’ve realized that in making food for a wide swath of the Midwestern demographic, they may be serving guests who are La Belle Vie regulars, farm families from outstate, and people who never eat anything they can’t microwave, all at the same party. It’s a chance to get everyone on the same page about organic, local trends. 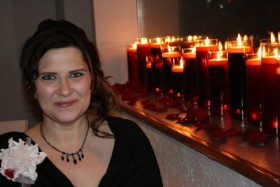 “One of our most popular items is the roasted vegetable platter,” says Heidi. “It’s so simple — we just toss a variety of vegetables in olive oil, salt, and pepper, roast them, and serve them with aioli or balsamic reduction. And people say, ‘What’s that? It’s so delicious!’ When we tell them it’s a beet, they’re amazed. ‘Oh my God, I can’t believe I ate a beet and liked it!’ I don’t say this to them but I’m like, yup, it tastes real! It tastes like the soil, it has the earth in it! People are so used to eating over-processed foods, and we can educate them.”

The Chowgirls are on a roll, with business increasing every year. They’re tremendously busy; Heidi and Chank have a 5-year-old, and Amy and her musician husband Eric Levy have three daughters. But what about their erstwhile writing careers? Have their creative impulses been completely absorbed into their culinary lives?

“We’re planning to write a cookbook,” says Heidi. “When we have time.”