I knew when I was preparing to interview DJ Chuck Chizzle I’d need to block off a large amount of time.

Chuck Chizzle, 37, born Charles Doughty, Sr., is a second generation disc jockey (his father, Charles Bell, spun under the moniker Chuck Chillout, and chizzle is urban slang for chill), his uncle, William Doughty, was with Flyte Tyme and Graham Central Station and his great uncle played with Duke Ellington and Count Basie.

“Music is all I’ve ever talked about – DJing is my love,” said Chizzle. “I’ve lost girlfriends, I’ve been homeless – all to follow my dreams (of being a disc jockey). I’d spend most of my paychecks on buying records. If I had a choice of paying my phone bill or buying the last couple 12-inch (records) I needed then I wasn’t paying my phone bill.”

One particular story Chuck told me drove his point home, as Chuck explained how he chose music over food.

“I had a girlfriend and at the time she saw I didn’t have any money and she gave me some money and said, ‘and don’t you spend it on no damn records,’” said the dedicated DJ. “Sure enough I got a call about a Mos Def, Hi Tek, Reflection Eternal import (a rare LP printed and pressed for overseas consumption) and of course, I spent that money on it.”

Thankfully for the DJ whose mixes air weekday mornings on the Twin Cities’ only urban format station, choices such as that don’t have to be made anymore.

Chuck said his early years of spinning were more than adventurous. His first DJ gig was at an after hours biker spot and his equipment was less than desirable.

“I rocked off of two cassette tape decks. I had to be all of 15 at the time. They wouldn’t let me leave the booth except in between each song I’d have to go out to the car I rode in to cue up the next tape,” said Chizzle. “But I rocked it – and I kept on rockin’ it. I can remember we used to ride the bus with about 10 people carrying records and crates to a gig – djing mostly for free.” 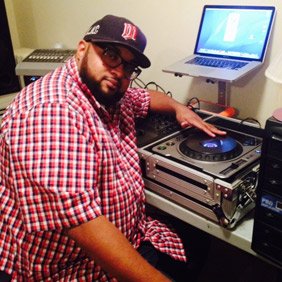 While Chuck made his name as a club DJ, he’s gaining exposure daily, spinning on the Moyning Show with hosts Lisa Moy and Shed G.

“I gotta big up Lisa and Shed for giving me an opportunity,” said Chuck, who is on his second stint with KMOJ and who was with B-96 (KTWN-FM) before it moved away from an urban/hip-hop format. “People like what I’m doing (on air). I try to do something different each time and have some fun with it. When you’re spinning your music you’re putting your personal stamp on it.”

Aside from daily mixes on the radio, fans can catch Chuck at Hunan Garden on Saturdays in St. Paul, 380 Cedar St., and at various other events and venues.

Chuck and I talked music for nearly an hour about everything from the state of today’s hip-hop, to how DJing has evolved from records to CDs to Serato (the DJ program that eliminated the need to carry crates of records and created seemingly thousands of DJs overnight), to DJ pet peeves and beyond.

His passion flowed with every word he uttered. After a while the talk morphed out of an interview into two music heads choppin’ it up about the subject they both love. But abruptly the discussion had to end. It was late in the evening and Chuck was eager to start working on his latest mix.