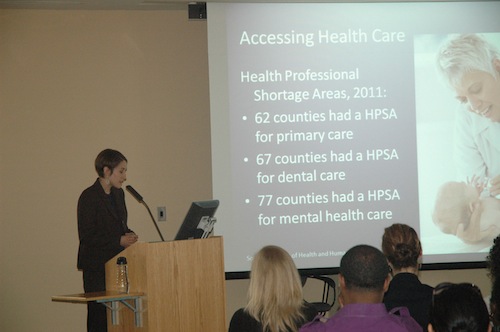 What are the unique challenges for families living in greater Minnesota? That’s the focus of this year’s KIDS COUNT Data Book, an annual report produced by the Children’s Defense Fund, with support from the Annie E. Casey Foundation. This year, the report, subtitled “Children Across Minnesota” focused on the unique challenges that face children and families outside the seven county metro area, such as accessing health care, food, and jobs.

“We’re looking at what geographic location means, especially in terms of poverty,” said Kara Arzamendia, Research Director for CDF at a presentation about the 2012 Data Book on June 7.

According to Arzamendia, the number of children in Minnesota has declined, though the population as a whole increased.  In the past 10 years, we’ve lost a few thousand children. “What this says to us is we can’t afford to lose even one child to poverty,” she said. “We don’t have an abundance of children that we can play around with, really.” By 2020, there will be more retirees than school children, she said.

Immigration is part of the equation, and in small towns, diversity is growing. “There have been growing pains for communities,” she said. “It can be difficult to meet the needs of different families and perspectives,” she said. And yet the diversity “can also keep communities alive and afloat.”

The relationship of poverty to race is staggering. Almost half of African American children are living in poverty, according to Arzamendia.

For rural families, some of the issues that surround getting support for children are a lack of social networks, and stigma of asking for help. Also, things like transportation, utilities, and food can be more expensive in rural areas, said Arzamendia.

The research shows is that child poverty is not just an urban issue. A small region that includes Lake of the Woods, Beltrami, Clearwater, Hubbard, and Mahnomen counties, has the highest level of children in poverty, at 21.1- 26 percent. There is also an even split between the metro area and outside the metro for those in poverty, Arzamendia said.

Work force participation is high in Minnesota, with 79 percent of families with at least one person in the work force. The problem is that “the work doesn’t pay enough to cover basic needs,” Arzamendia said.  The average wage for job vacancies in greater Minnesota is about $10/hour, or about $20,000 per year. Many times these jobs lack critical benefits, such as with many retail and restaurant jobs. The research shows that people living rural areas are more likely to have children without health insurance.

Across Minnesota, some 75,000 children are not insured. The region including Lake of the Woods, Beltrami, Clearwater, Hubbard, and Mahnomen counties has the highest percentage of children without insurance in 2009, at 10.1 percent, compared with 5.8 percent uninsured children in the seven-county metro area, according to census data. Families who are not insured most commonly rely on Medicaid and CHIP to access the health coverage they need, according to the Data Book. According to the U.S. Census, 83 percent of families earning $88,000 or more a year have employer-sponsored health insurance, while only 19 percent of those earning $22,000 or less had health insurance sponsored by their employer.

According to the Data Book, one solution to these health care shortages would be to promote policies that attract more primary care providers to Greater Minnesota. For example, the Affordable Care Act provides scholarships and repays education loans for healthcare providers serving in shortage areas. The book highlights Project Care, a free health care clinic operating in Hibbing, Ely and Grand Rapids as a promising practice that provides health care services among people without insurance to people living in the Iron Range and surrounding communities.