I put up some new perch racks for my chickens. This latest batch of chickens never seemed to get the hang of them and they kind of just huddle up in a corner on the floor; easy pickings for some raccoon or coyote.

So lately I’ve tried to get them using the perch. Chickens don’t listen very well. And they sure as heck don’t ‘herd’.

There are a variety of perches. Wonder what sort of perches I provided?

Here’s a hint. Not this: 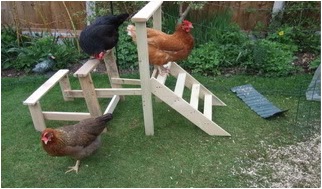 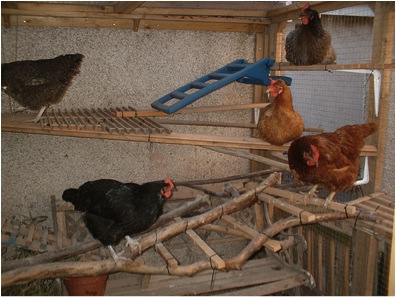 My perches are simple 2×4′s. About as basic as a tree.

My older siblings could tell you stories about chickens in trees. My brother had to climb up and get them down. My sister had to collect the eggs. They both hated their jobs. At least my chickens don’t roost in trees. Much.

They do hang out in a lilac bush during the day. 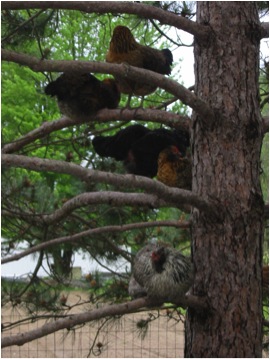 So, the first night I simply chased the chickens over to the perch. They don’t really settle down and roost until night so it was dark out when I decided to do this. In hindsight I should have told my wife what I was up to. The chickens were greatly upset by my meddling and it sounded to Kelly like a massacre down in the chicken coop. Five nights in a row now I’ve poked, prodded, chased, herded, carried, lugged and cajoled those chickens to the roost.

And they still haven’t figured it out.

The White Rock breed is very quiet and I can pick them up and tuck them under my arm and put them on the perch. The Black Australorp do NOT like to be picked up and they make a real fuss about it. The Silver Laced Wyandotte have no sense of balance. I’ve been picking the chickens up and carrying them over to the perch and I place them on it.

One of those black ones lept straight up, smacked into my face and broke both nosepieces off my glasses. They were broken before and I have super glued them back on twice now. But this time I couldn’t find the nosepieces. They’re down in the dirt and feathers and manure and….

Well, I didn’t look too hard.

I have been trying to help these birds, and have been handsomely rewarded for it. A couple weeks ago it was a stick up my nose. Today it’s broken glasses.

It’s quite an ordeal. I’m hoping they learn soon. Or one of us should anyway.

They say no good deed ever goes unpunished.
When has this been true for you?