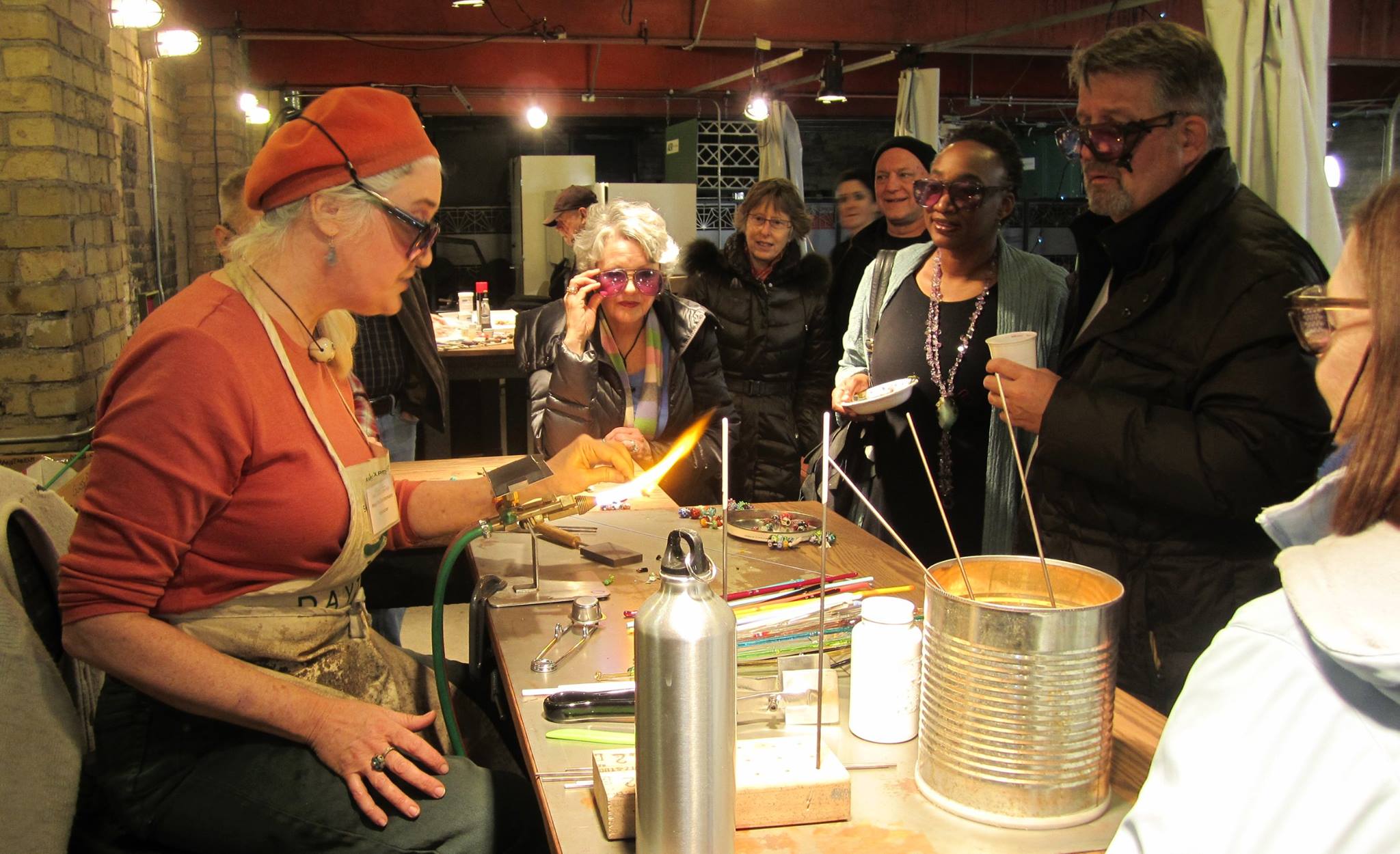 I really like the term “fire artist” because it sounds like “fire bender” and I’m all about the Avatars. While there are no fire benders at the Chicago Avenue Fire Art Center, there are plenty of fire artists. Fire arts is an umbrella that houses many artistic skill sets including blacksmithing, glass work, jewelry making, sculptural wielding, enamel work and even electronics and neon work, just to name a few. Pretty much any form of artwork forged from heat, spark or flame can fall under the fire arts category

On March 19, I attended the Chicago Avenue Fire Art Center‘s Open (Hot) House, an art exhibition featuring the work of CAFAC’s students from that previous semester. I live close by and thought this would be a really good chance to get acquainted with CAFAC by looking at some art, talking to some people, watching a blacksmithing demo and acquiring a bit of history about the building.

On my way up to the second level, I ran into local artist and friend Yuya Negishi, who was watching a jewelry making demo. He introduced me to local fire artist Heather Doyle who is the CAFAC’s coordinator and one of their instructors. I asked Heather if she would be willing give me a tour of the place when things were less busy, and she gave me her card and asked me to call pretty much anytime to set something up.

This is one of those writer/artist moments that made me feel super cool and connected because I get to take a tour of something.

I’m pretty sure anyone can tour CAFAC, especially if they plan on taking classes there because the more you know about the space and the equipment the better. CAFAC has heavy safety regulations in place in order to ensure the protection of the staff, students and the community. It’s been three years and nothing has burned down yet, so they’re clearly doing a good job.

CAFAC makes its home in what used to be the Nokomis Theater, which opened in 1915. Everyone involved in the CAFAC is a total history buff and wants to preserve, restore and maintain the architectural history of the building. As we checked out the old projection booth, where Heather set aside space for an office, we joked that it’s probably haunted. The 1,200 square foot open industrial work space is conveniently set up so that all of its stations roll in and out for easy access and storage, and there are walled units for storing larger sculptural pieces.

CAFAC is a volunteer-run non-profit, so its staff of volunteers built and donated much of the equipment used. Walking through the space I felt like I was surrounded by all of these amazing tools that I was in no way qualified to touch or even really look at, but Heather told me that 200 volunteer hours go to taking a free fire art class, which means I’m only 200 hours away from realizing my three-day-old dream of becoming a blacksmith for a month (196 by the time you read this).

Right now, CAFAC is working on expanding their influence and furthering their outreach to the community. It was founded by people living in the Powderhorn neighborhood. Since their arrival in 2010, the intersection of Chicago and 38th experienced a renaissance and is now home to more galleries and creative businesses residing in buildings that has been vacant for years.

This is why art is important. It is a seed that is planted and soon blooms into more opportunities and advancements. We don’t just succeed for ourselves, we succeed for everyone.