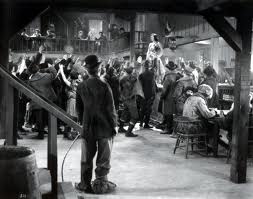 Many of the most defining moments of Charlie Chaplin’s career come from his 1925 film The Gold Rush: Chaplin’s Tramp, hollow-eyed from hunger, eating his own shoe. The Tramp transforming into a giant chicken as his starving friend Big Jim hallucinates. The Tramp and Big Jim, scrambling to stay alive as their shack teeters on the edge of a cliff. Chaplin transforming two rolls speared on forks into a pair of nimble, dancing feet. The Gold Rush is one of Chaplin’s most fully realized expressions of lightness and darkness, comedy and tragedy—and a great introduction to Chaplin and silent comedy, too.

On Thursday, October 16, 2014 at 2 pm, the Walker Art Center in Minneapolis is offering a chance to see this iconic film on the big screen, at a free screening of The Gold Rush.

The showing is part of Walktoberfest, a celebration of the Walker’s 75th anniversary, featuring extended hours on October 16 through 19, free gallery admission, a beer garden with music, food, and local beer, and free screenings of films from the center’s Ruben/Bentson Collection. In addition to The Gold Rush, the Walker will show another silent during the long-weekend celebration, the 1927 Russian film Bed and Sofa, at 2 pm on October 17.

Sheryl Mousley, Senior Curator of Film/Video at the Walker, notes that as the Walker film department prepared for Walktoberfest, they wanted to choose films that best represented the Walker’s Ruben/Bentson Film and Video Collection, begun in 1973 thanks to the funding and support of prominent film exhibitor Edmond Ruben and his wife Evelyn and sustained by the Rubens’ daughter Nancy Bentson and her husband Larry Bentson. The Collection contains more than 1000 titles, ranging from an 1894 Lumiere Brothers short to contemporary experimental films.

The Walker film curators chose four films to represent the Center’s vast holdings. Because the silent era figures prominently in the Ruben/Bentson Collection, two of the films are silent: The Gold Rush and Bed and Sofa, a sexually charged satire about a husband and wife sharing a small apartment with a friend in the early days of Communist Russia. The other two films, both “talkies,” are The American Dreamer, a 1971 portrait of actor Dennis Hopper (screening Friday, October 17 at 7:30 pm), and Who Are You, Polly Magoo?, director William Klein’s 1966 spoof of the fashion world (showing on Saturday, October 18 at 2 pm).

The 35 mm print of The Gold Rush being shown at the Walker this month originates from a reconstruction of the original 1925 film put together by silent film preservationists Kevin Brownlow and David Gill in 1993. A new digital transfer was created from Brownlow and Gill’s restoration in 2011, and film preservationists from the Cineteca di Bologna in Italy and the Criterion Collection put in over 500 hours cleaning dirt, scratches, and other flaws. The restored data was then recorded on 35 mm duplicate negative stock.

In 2011, Timothy Brock conducted the Orchestra Citta Aperta in a new rendition of Chaplin’s 1942 score for The Gold Rush, which was then married to the new restoration of the film. Janus Films is the distributor for this new version.

According to Mousley, one reason the restored version of Chaplin’s The Gold Rush rose to the top of the Walker’s list was that 2014 marks the 100th anniversary of the first appearance of his Tramp character on film. It seemed fitting to commemorate that milestone along with the Walker’s 75th anniversary.

Mousley also expressed admiration for the ways that Chaplin blended themes of poverty, greed, and “the quest for gold” in The Gold Rush.

“It’s just a fascinating statement,” she said of the film.

It’s also a film that hauntingly evokes the emotional experience of loneliness, an emotion with which Chaplin was intimately familiar. As a poor kid in south London, he often wandered the streets of his neighborhood on his own, peering in at shop windows, longing for what he couldn’t have. At fourteen, he snagged a small part in a British touring production of Sherlock Holmes, but when he tried to socialize with the adult actors at pubs during the cast’s off-hours, Chaplin sensed that the adults felt uncomfortable having a kid like him around, and he drew back, spending more and more of his time on tour alone. Even after he achieved great fame and was dominating Hollywood parties with his dazzling impressions and quicksilver grace, there was always a part of Chaplin that remained that awkward, ill-at-ease kid.

In The Gold Rush, when the Tramp shuffles into a rollicking dance hall and stands apart, watching everyone else have a good time, hanging back from joining in—or later in the film, when the Tramp gazes through a window at a New Year’s celebration, out in the cold on his own while revelers link arms and sing together–I can’t help thinking Chaplin may have been drawing on his own experiences as he made his film.

“My comedy is actual life, with the slightest twist or exaggeration, you might say,” Chaplin once told an interviewer in 1915. “People love the truth. . .You must give them the truth.”

To celebrate the Walker’s showing of The Gold Rush, I’m giving away one free copy of the University Press of Mississippi’s book Charlie Chaplin Interviews, a collection of rare interviews with Chaplin from the earliest days of his film career to near the end of his life. The interviews offer a wonderful chance to hear Chaplin talk about his life and career in his own words. They also offer an interesting glimpse at how Chaplin shaped his own public image, revising his own story as he went, improvising the tricky business of being the world’s biggest movie star.

For a chance to win a copy of the book, comment on this blog post with a note about your favorite moment, shot, or sequence from a Chaplin film. Listing more than one is OK. I’ll choose a winner at random and announce who gets the book a week after this blog post appears online. Good luck!

All images from the Chaplin films made from 1918 onwards, Copyright © Roy Export Company Establishment. Charles Chaplin and the Little Tramp are trademarks and/or service marks of Bubbles Inc. S.A. and/or Roy Export used with permission.