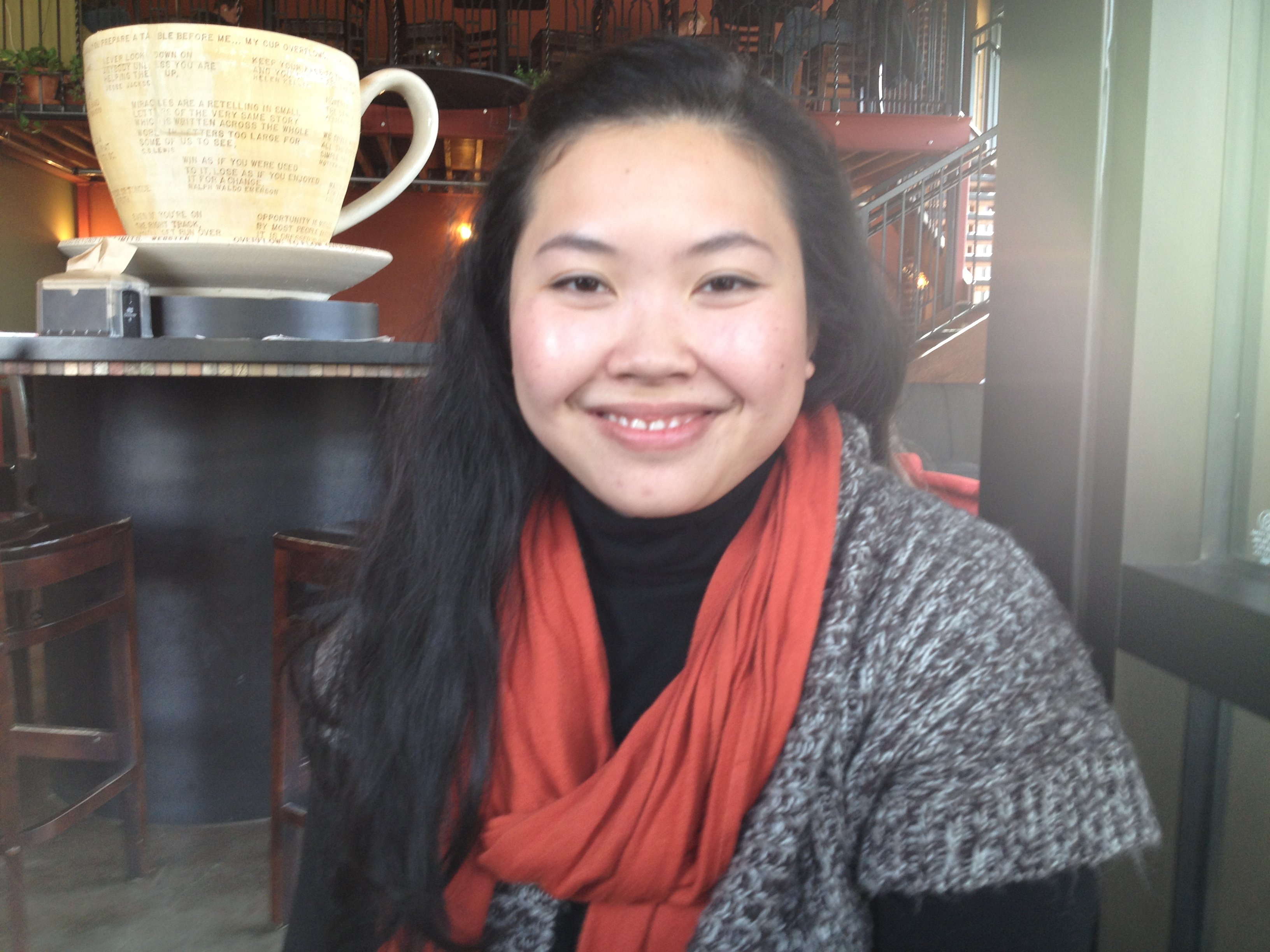 Though she was just two years old when she moved to the United States, sometimes Chanida Phaengdara Potter dreams of her home country, Laos. In her dream, she’s in the middle of a field, and it feels very familiar. Her mother is working in the distance, and there are flowers. In the dream, the rain begins to pour down suddenly, and everything is muddy and difficult to walk through.

After moving here with her family, who were in exile, Potter has spent practically her whole life in Minnesota. She’s returned to Laos as an adult, and now plans to journey there again, in order to start up a project that builds computer literacy and entrepreneurship skills to women and children.

Potter’s father was highly educated, and had studied at Fort Knox and Osaka, Japan, before enlisting in the army. He became a senior lieutenant through the Royal Lao army, but after the Civil War in Laos, he was arrested, and ended up spending 11 years in prison.

While her mother was pregnant, she went to petition for his relief. The guards had responded that if her mother brought the rest of the family, they would let her see her husband. When she did so, the entire family ended up in a labor camp.

“It’s interesting, because there’s this love hate thing with the labor camps,” Potter said. “It was tough and it made my family impoverished. But they learned a lot in the labor camps. They learned how to appreciate the land and the people.” To this day, her parents still keep in touch with the other people that were there.

Activism Across Borders: At the suggestion of historian Peter Rachleff, we are digging deeper into ways in which immigrant communities remain connected to their home countries, in the realms of politics, activism, etc. Rachleff urged us to dig deeper into “the connections between activism ‘there’ and ‘here,’ the circulation of ideas, the synthesizing of a single struggle, albeit with many internal currents.” This article is part of the story.

At the labor camp, Potter’s father was supposed to reaffirm his alliance with the communist government, and was eventually let go. “It’s funny,” Potter said. “The thing about the Lao people — we’re not a very repressive regime.” Her family looked at the experience in the labor camp as a punishment, but that it wasn’t done in an oppressive manner. To this day, her father reminds her that they still have family and friends in Laos, and that’s more important to him than anything else. “It’s interesting how my parents talk about,” she said. “They say they got worse treatment in the refugee camps in Thailand.”

The labor camps in Laos were called education camps, and the family engaged in a lot of landscaping and gardening projects. During her father’s “re-education,” Potter’s father didn’t so much change his political perspective as he “realized he had more appreciation for the land and the people,” Potter said. “He doesn’t have political affiliation right now. He was worried about not being able to be in Laos. It’s a very weird ethical dilemma. He wanted to see my mother and be with us, and he needed to figure out a way to do that.”

Since moving here at two years old, Potter has spent her whole life in Minnesota, living much of her childhood in housing projects in North Minneapolis with her seven siblings. Potter’s family was placed in the Harrison neighborhood, in a housing project next to Park Place, on Humboldt and Highway 55.

Eventually, she went to Armstrong Senior High School in Plymouth. Though her neighborhood school was Henry High School, her dad didn’t want her to go to school there, so he drove her to Armstrong.

Armstrong had a huge ESL program, with many immigrants placed in the program, but “there was racism that was happening,” she said. There’d be slurs said against the Asian students, and one incident that occurred while she was president of the Asian Club, where there was a fight between one of the Asian students and a Korean adoptee. On one side, there were the Asians, and on the other, the white students and other adoptees.

One of the first organizations to help her family was the Lao Assistance Center, where Potter has been a volunteer and consultant. “Now here I am, I’m older and giving back to my community too,” she said. “It’s great being able to connect to my community here, to immerse inn my culture and connect with my heritage.”

The majority of Potter’s work involves community engagement and public affairs. She works a lot with public policy, and has worked with Habitat for Humanity on housing issues. With the Lao Assistance Center, she’s done a lot of communications and public affairs, increasing the visibility of the Lao community.

Potter also runs Little Laos on the Prairie along with Bryan Thao Worra and Danny Khotsombath. It’s a blog that’s been going strong for two years. “It’s been a very good platform for the Lao community,” she said. “Having an online voice is pretty new.”

Potter last visited Laos in 2010, and she’s going back this month with a new project that she’s working on called the Connect Lao Project, which she’s piloting in her parents’ home town of Ban Phon, about an hour outside the capital. There her parents have a little café. They are retired, and are U.S. citizens who go back and forth between the two countries.

The project will involve setting up a small computer lab that will act as a communications hub. “I have a curriculum to help target women and children to use computers and teach them to be computer literate and use the internet,” she said.

Potter has already taught her parents how to use a computer, and last year, taught them about Skype. Then one day her mother, who was in the United States, did a Skype call with her father, and her father brought over a bunch of villagers on the other end. “My dad had all these people trying to cram their faces into the computer screen,” Potter said. “Some people hadn’t seen each other since the war. It was very emotional and they all cried. They were so happy and ecstatic to know this thing exists.”

The program will at first be free, with funds from the café to go toward supporting the educational programming. Potter said she also plans to offer communications consulting with private businesses, with half the proceeds going toward the program. “My hope is that with the curriculum, people in the village would learn to use these tools. When they graduate, we’d give them a laptop for a small fee.”

Laos is relatively new to the internet — the country just starting to have access, and the majority of the access is in the city. In the countryside where her parents live, there’s some internet access, but there’s “serious digital divide between the city and the country side.”

One of the reasons Potter decided to go for a for-profit/non-profit mixed model is because currently, the Laos government isn’t approving applications as much for non-profits.

Laos is still currently a communist government, but according to Potter, now “it’s more neo-Marxist. It’s communist but it’s one of the more liberalized communist countries.” During the economic downturn that affected so many countries across the world in the last few years, Laos was booming, she said.

Laos is quickly climbing off the bottom of the list of least developed countries in the world, according to Potter. “They’ve been doing a lot of work to meet the millennium development goals through the UN,” including the goal of clearance of bombs left over from the U.S. Secret War in Laos.

Right now, about 80 percent of aid to Laos comes from foreign countries, which provides another reason why it’s more liberalized now. At the same time, “Laos is trying to be a more independent nation,” Potter said. “It’s kind of a conflict.”

The last year has not brought forth great news, with disappearances of political activists, include three Lao Minnesotans who were killed in Laos in January.

In returning to Laos, Potter is very cognizant of the type of help she wants to offer. “I knew I wanted to get involved, but I didn’t want to do the Western sense of help like a lot of NGOs,” she said. “I want it to be holistic. I want it to be in the best interest of the people — more feeding them knowledge and giving them the tools and resources to make a better future for themselves. There needs to be a better approach to development. You don’t want to have the white savior complex. People need to be empowered.”