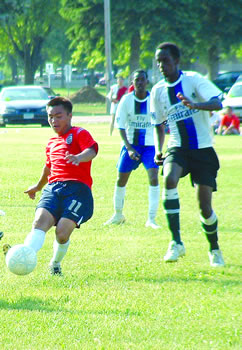 A Hmong player competes during a recent tournament.

From the time a French missionary organized the first soccer game in Hmong history, the game has continued to play a big part in Hmong culture.

The importance of soccer can be found during the Fourth of July weekend in St. Paul, where an annual soccer tournament has become the single largest gathering of Hmong in the United States.

Soccer is also one of the commonalities that the Hmong share with other world cultures, as illustrated with the addition of players and teams from other ethnicities playing in Hmong organized tournaments in recent years.

The infusion of non-Hmong players in Hmong tournaments has both raised the level of competition and put a spotlight on the rising crop of young, talented Hmong players, solidifying their place among the top of the Asian soccer scene in North America.

But within the Hmong soccer world, there is much talk about the rising tensions among competing teams. Tensions that have escalated into violence on the field and continued verbal posturing off the field.

On one side there is an emphasis on elevating the skills of Hmong players so that they can compete on a global level. The other side accuses these elite teams of persuading talented players and throwing them in situations where their skills are exploited and exhausted.

With more and more Hmong youth playing organized soccer from an early age, it is apparent that the new breed of Hmong players, some who have gone on to play collegiate ball, are equipped to play soccer at a very high level.

The future of Hmong soccer therefore hinges on the return of these top-notch players back to the Hmong community to forge a new era in the evolving state of Hmong soccer.

However, with all the bickering and ongoing tension within the Hmong soccer world, the Hmong soccer scene is an unpleasant place for the young star to return to. What does the future hold for Hmong soccer and how do we continue improving our game and our players?

Because soccer seemingly mirrors other aspects of the Hmong world such as politics and business where bickering and infighting is a constant factor, Hmong Today needs to ask the question: Can we Hmong stop fighting for once so that we can advance to the next level?

Hmong soccer has come a long way
Standing on the sidelines as the game clock runs down, Abdul shakes his head in disappointment as his team fails to overcome a two-point deficit. Playing in his first Hmong tournament, Abdul, whose team consists mostly of Somali players, admits that he had greatly underestimated the skill and ferociousness of Hmong teams.

Exposing the bruises and cuts on his shin, Abdul shakes his head and comments, “You guys are tough, man. We thought we would take the prize money easily, but I guess we’ll go home with nothing.”

Abdul is not alone in praising Hmong soccer players. As more Hmong players are exposed to the mainstream soccer world, it has become apparent that there is some serious talent coming out of the Hmong community.

“Hmong soccer has come a long way over the last few years,” comments Youssef Darbaki, head coach of the semi-pro version of Twin Stars. “On the most part, the skills are there, but the problem with most Hmong players is the lack of formal training and the limited knowledge of the game.”

A coach on the University of St. Thomas soccer team, Darbaki’s soccer experience spans over 30 years of international competition, including a spot on the Moroccan national team that went to the 1982 World Cup qualifying finals.

His professional opinion, therefore, isn’t taken lightly when he declares that Hmong players have the potential for international exposure. “Hmong players are better than the Hispanic and Somali players that I have seen. However, there is still great need for discipline and coaching.”

Fighting for respect
In the championship game of the first annual International Sports Tournament, the score was a tightly fought 0 – 0 tie between the semi-pro Twin Stars (a team consisting of Africans, Hispanics, Americans and Asians / Hmong) and Black Cat, an all-Hmong powerhouse team.

With more than 30 minutes on the clock, a referee points to the wrong direction, momentarily giving the ball to Black Cat. He eventually corrects his call and awards the ball to Twin Stars who immediately scores the only goal of the game.

After a long discussion with the head coaches, play resumes with the score 1 – 0. Suddenly, two players collide in a routine play for the ball. Without hesitation, Black Cat players begin chasing Twin Stars off the field. Fans from both teams immediately respond by jumping on to the field wielding as weapons everything from lawn chairs to umbrellas.

Mayhem and chaos ensues, prompting more than a dozen policemen to storm the field where a mini-war has taken over the soccer game.

With K-9 dogs and riot-stopping technique, the police are able to retain a sense of order and demand that the tournament be immediately halted.

Tournament organizer Fong Herr announces to the dispersing crowd that both teams would be disqualified with no first or second prize to be distributed (after lengthy negotiations after the tournament, Black Cat was eventually awarded the second-place prize money, but with no trophy or recognition.)

Asked why he would jeopardize his team’s chances to win either first or second place by chasing Twin Stars off the field, Cher Yang, the midfielder for Black Cat responded, “Because it wasn’t fair to begin with. The entire tournament was held so that Twin Stars would win. The refs were former Twin Stars players who obviously will call plays for their team. It’s a matter of frustration because things were not fair for us from the beginning.”

Looking at the bigger picture of Hmong soccer, Yang adds, “The entire system is corrupt. Just take a look at how teams are selected for the Fourth of July tournament [last year, teams were strategically placed in brackets by tournament organizers]. They look at their favorite teams and put them in easy brackets while teams that they want to eliminate are placed in tough brackets.

“All I want is fairness for once. I admit I have a bad reputation for fighting, but that’s only because of the frustration of playing in a corrupt system.”

Solutions for the future
Recognizing the need for organization and hoping to build a foundation for the future of Hmong soccer, Chang Vang took matters into his own hands by starting the first-ever Asian Soccer League.

“Year after year teams play and practice by themselves, only to meet during tournaments. There were no records taken and nobody was accountable for the progress or lack of progress that we Hmong were making in the soccer world,” Chang commented. “With a little communication and a little organization, I hope things begin to change for the better.”

On a national level, sports tournament organizers such as Fong Herr have also seen the need to get organized. After the fight between Black Cat and Twin Stars in the tournament he hosted, Herr has received verbal agreements from the half dozen other tournament organizers in Wisconsin and California to form a network where names of teams and individual players will be shared.

“When a person or a team has caused problems for one promoter, all the promoters will ban those individuals from playing in the tournaments throughout the nation,” Herr envisions. “This kind of communication is just the beginning of what the future holds for Hmong soccer.”

Receiving a slew of complaints, Pheng Lee, sports coordinator for the Lao Family Fourth of July tournament, will also change the way they have been formulating brackets. This year, he promises fairness by holding a public drawing between the team captains two days before the tournament begins. “This way, everything will be fair and people can see that we are trying to fix the problems of the past.”

Coach Darbaki has also been a victim to Hmong soccer politics after some of his younger players withdrew from Twin Stars for no apparent reason.

“It’s all political, but I’ve not been able to understand what is going on. All I know is that their parents are not allowing them to play for us and I could never understand why.”

His vision, along with Twin Star owner Fong Herr, is to create a youth soccer academy where Hmong players will begin training “the right way” when they are as young as 4 or 5 years old.

“There is so much potential for Hmong soccer to become really powerful, but it will take hard work and a community effort to make it happen.”