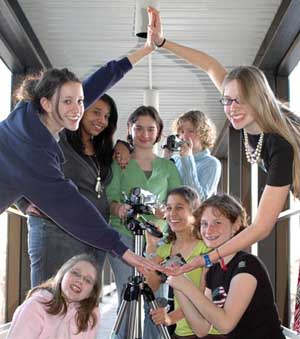 TVbyGIRLS is creating its own stories.

What happens when you put a video camera into the hands of a girl and empower her to use it to ask tough questions and explore issues that matter to her?

Amazing things happen—both for the girl and for the rest of society.

Fourteen-year-old Rachel Quednau found hope for the future and became a better person.

High school senior Amalia Nicholson lost a little of her cynicism and discovered a career path.

At age 11, Casey Haarstad discovered her best self and learned that she doesn’t have to compromise her vision just to make someone else happy.

At a time when popular culture seems to reflect a funhouse version of reality, the nonprofit TVbyGIRLS is giving young women and girls in the Twin Cities and greater Minnesota the metaphorical remote: the ability to change the channel and the tools to create their own images and messages.

In 2001, TVbyGIRLS started doing workshops around the state on media and visual literacy, helping girls decode the stew of images that fill their everyday lives. Two years ago, TVbyGIRLS founder and president Barbara Wiener and two other filmmakers began working with a core group of 15 girls, ages 10 to 18, in year-long mentorships, teaching them to leadership and creativity through video production.

“We don’t see girls behind the camera, except as an exception,” observed Wiener. “That’s where the power is.”

She should know. Wiener, a producer, director and writer, has six Midwest Emmys and several other awards to her credit.

“What we’re really doing is teaching them to think, to contextualize and to create,” Wiener added. The goal is to help girls become critical thinkers and leaders who use media to create social change.

The outcome of those efforts so far include “What’s with the Hijab?” a special project film created with a group of Somali teens; “First Kiss,” a video poem contrasting two girls’ experiences with the first flutter of love; and “The Change Show,” a documentary exploring the difficulties of finding yourself in the complex world of adolescence. TVbyGIRLS films have been shown at the Minnesota Institute of Arts (Art of Democracy exhibit), Minnesota Center for Photography (Minnesota Girl Culture exhibit) and the Walker Art Center (Girls in the Director’s Chair) and accepted at three national festivals.

This year, TVbyGIRLS turned their cameras on the world of politics. In collaboration with the White House Project, TVbyGIRLS Core Girls crisscrossed the country, filming more than 40 hours of interviews with women who were participating in Go Run, a leadership training program for potential candidates.

Amalia Nicholson was one of those cynics. Before the project, Nicholson described herself as pessimistic about the state of politics. “I was surprised so many women wanted to be involved in such an ugly game,” she said. But talking with and interviewing the women gave her new hope. “I was surprised by the openness, the cooperation, the honesty these women have. I just don’t see that in politics.”

This year, TVbyGIRLS also began a partnership with girls on the Leech Lake Reservation in northern Minnesota. Once a month, girls from Leech Lake come to the Twin Cities to work with the Core Girls; in between, the girls communicate by email.

“Girls on Leech Lake feel like no one is hearing their stories, ” Wiener said. “The goal is [to] create a piece around issues that are important for girls in Leech Lake and our girls.”

Wiener hopes that TVbyGIRLS will blossom into a national weekly television show so that all girls can see they have the power to tell their own stories.

“They have enormous energy to make a better world,” she said.