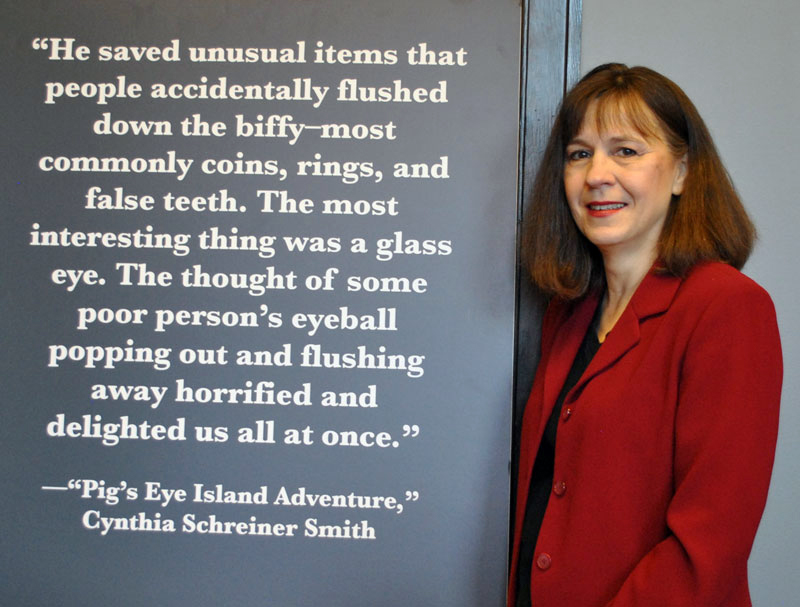 When I was growing up near Mounds Park during the fifties and sixties, fresh milk was delivered to our stoop like clockwork; however, no one came to haul away the refuse. A big, rusty metal drum in our back yard received the trash instead. When it got full, my father lit it on fire. Items you couldn’t burn—bottles, cans, old plastic toys—were driven to the Pig’s Eye Island City Dump.

My brother almost always got to go with Dad to the dump, a fact that he lorded over his little sisters. But sometimes we got to go too. Dad would throw the trash in the trunk of his Chevy and we’d fly down steep Warner Road toward the Mississippi River. At the bottom of the hill, he’d take a hairpin left turn onto the gravel road that led to Pig’s Eye Island and the dump. My father paid fifty cents at the gate for the privilege of adding to the mountain of trash.

Afterward, we’d continue farther onto the island to visit the farm of my Uncle Mickey. We called him Uncle Bum-Bum because he lived on an Island called Pig’s Eye, beyond the dump, past the municipal sewage treatment plant, and across many railroad tracks with boxcars hiding hobos. I remember one visit when all three of us kids were in the car. As we passed the sewage treatment plant, we somehow convinced Dad to stop and see if we could take a peek inside. Being young children, we were fascinated by all things pertaining to toilets. I’m sure the man inside was surprised to see our little family asking for a tour.

Most people had no interest in the graphic details of disposing with bathroom waste. Receiving a warm invitation to come inside, we were met by an enthralling maze of pipes, vats, and spigots—and an unpleasant odor. The worker kept up a running patter of mesmerizing facts regarding Saint Paul’s sewage system. Eventually we were led into a huge room with a gigantic open pool that glistened a beautiful golden yellow. It took us a moment to figure out what it was. My brother gleefully threatened to dunk his little sisters in it. We screamed with appropriate giggling and fear.

The tour ended with a trip to the office, where the man kept a strange collection in a little glass case. He saved unusual items that people accidentally flushed down the biffy—most commonly coins, rings, and false teeth. The most interesting thing was a glass eye. The thought of some poor person’s eyeball popping out and flushing away horrified and delighted us all at once.

At home, we breathlessly told our mother about our exciting trip to the Pig’s Eye sewage treatment plant. Mom just shook her head, giving Dad that “What were you thinking?” look. But all she said was: “Sounds wonderful, kids. I hope you remembered to thank the nice man.”

Aghast, I realized I had not. I felt horrible the rest of the night. He had been so nice, so proud of his unappreciated job. Lying in bed, I fretted and fretted, thinking about the nice man and his collection of flushed items. Suddenly, inspiration hit! I jumped out of bed, wrote him a neatly printed thank-you note, carried it to the bathroom, and flushed it. Confident he would get my note in the morning, I fell blissfully asleep.

Cynthia Schreiner Smith has turned her early fascination with Pig’s Eye into a successful career as a historical tour guide for Down In History Tours at the Wabasha Street Caves. She can be seen most often portraying the 1930s gangster Edna Murray, a.k.a. the Kissing Bandit.