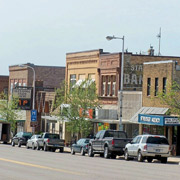 A few generations back, small towns used to generate their own strength and economic activity. Now, rural Minnesota communities are dependent on their proximity to regional centers, such as Willmar, Worthington, Marshall and Mankato.

Let’s take my hometown of Kerkhoven in west-central Minnesota for example. Back in 2000, it had 759 people. By the time the 2010 Census was taken, it still had 759 people. No change up or down; but let’s be careful about saying nothing happened to the community in the past decade.

“Kerk” and nearby Pennock have become integrated parts of Willmar, their nearest regional center, as area jobs and industries have consolidated there, said Ted Almen, editor and publisher of the Kerkhoven Banner.

Kerkhoven is on the eastern edge of Swift County, the county with the largest rural population decline at 18.2 percent, or 2,173 people. But because of its proximity-10 miles west-to Willmar, in Kandiyohi County, Kerk’s population held steady.

Communities around Willmar that do not serve as “bedroom communities,” or suburbs of the regional center, or have satellite manufacturing like Atwater, for example, all continued recent trends of showing population losses.

Willmar’s West Central Tribune newspaper noted Kandiyohi County’s population grew by 2.5 percent in the past decade while Willmar’s population increased by 6.4 percent, to 19,610, meaning that Willmar growth and economic activity carried the county forward. Willmar’s growth comes from being an agricultural processing and marketing center and home to Minnesota’s nation-leading turkey industry.

It’s the reason why many small towns in rural Minnesota have the potential to become something new-satellite cities of a regional center-and shift into a growth mode after decades of steady decline.

The Fargo Forum noted that towns along Interstate 94 and thus within easy commuting distance to jobs in Fargo and Moorhead were growing while towns off the interstate reflected declines common throughout rural Minnesota.

Similar details came from the Marshall Independent, the Mankato Free Press, the Worthington Daily Globe and the West Central Tribune. Taken together, these reports reveal some small communities around growing regional centers are either growing or hanging on even as populations declined in 36 rural counties.

Going west on U.S. Highway 12 from Willmar, nearby Pennock gained four people in the past Census, to 508 people, while Kerkhoven stayed even as more local residents became commuters. West of Kerk, Swift County populations fell at Murdock, De Graff, Danvers and Appleton, and even at the county seat city of Benson that does have significant manufacturing.

Appleton took the biggest hit and accounted for nearly two-thirds of Swift County’s population loss. That largely resulted from closing a privately owned and operated prison facility there, said Appleton Press editor Leslie Ehrenberg. While negotiations are underway to reopen the prison, Swift County would still have lost population if the prison were open when the Census was taken, she said.

Clearly, quality of roads and commuting distances either helped or hindered small towns within the past decade. Elsewhere in the area, Hancock had a 6.7 percent population gain as commuters can go either north to Morris or down to Benson, Clara City had a minor loss even though residents there can commute to jobs at Willmar, Montevideo, Benson and other west-central communities.

Meanwhile, New London had a 17.4 percent increase to 1,251 and Spicer grew 3.6 percent to 1,167. Both of those towns are set among beautiful lakes that contribute to quality of life, said Kerkhoven’s Almen, and both have good commuter road access to Willmar.

Atwater, farther away to the east, is pushing the commuter reach of Willmar. But farmers in the Willmar to Litchfield region did start the Bushmill ethanol plant there making Atwater a local manufacturing community, or industrial satellite, of both larger communities. Atwater had a five percent population gain, to 1,113 people.

In a sense, demographic history is starting to repeat. The regional centers, or central cities of rural Minnesota, became manufacturing hubs in past decades as manufacturers moved away from the Twin Cities metro area in search of less expensive real estate. The metro area, meanwhile, continues to grow in the suburbs as more people are employed in services and commute to inner cities and suburban developments.

Going forward, some Minnesota small towns can become manufacturing sites as extensions of regional centers, and others can be successful bedroom communities. There, local “Main Streets” would become the equivalent of suburban strip malls that provide convenient stores and services for neighborhoods.

Which communities might have such a future may become more apparent by fall. Tom Gillaspy, the Minnesota state demographer, said information on community age cohorts would become available this summer. Some small towns are known to be aging and have few remaining residents who would be considered as part of a potential workforce.

“If these communities were to get a factory, they would have to count on people moving in to be the workforce,” he said.