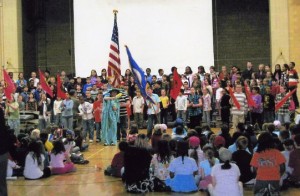 April 1 was Census Day. A week before, I had the privilege of listening to the second- and fourth-graders at South St. Paul’s Lincoln Center Elementary present their music programs to their fellow students and people like me. These kinds of events are always highlights for me. On stage were two of my grandkids, but the effect would have been the same if they were “just kids” up there front and center. One feels the enthusiasm and pride of the students; and sees the skill and respect of the adults involved in such productions.

In the morning session, the fourth-graders did a wonderful program, “Let Music Surround You,” which closed with their rendition of Neil Diamond’s “America” (presented here by Neil Diamond himself). One of the fourth-graders played the Statue of Liberty; fourth-grader Teddy was one of those who carried in a banner. I choked up. After seven playful songs, the music teacher told us that the last number would be serious, and it was, in a wonderfully positive way.

I present this vignette on Census Day, 2010, since for almost the last year I’ve been completing my French-Canadian family history which goes back nearly 400 years in North America, and almost 160 years in the United States. Were it not for our immigrant forbears we would not be here.

A goodly part of the research base for ordinary family history is assorted census records. While my family came to the U.S. long before Ellis Island, and to North America long before there was a United States, the feelings and the dynamics were largely the same then, as they are now. “America” is a nation of immigrants, perhaps the most heterogeneous society ever existing on earth, still bringing together all of the rich variety of human beings.

I’ve sent in my census forum, and it was a simple, painless form to complete.

It was not always so simple, as I’ve found from attempting to decipher handwritten census documents generated from 1857 on in the United States, and earlier in Canada.

One can envision a census taker in 1857, walking from home to home, taking the census. The U.S. census taker could write (legibility often in question), and speak English. But frequently the people enumerated were not conversant with English (In my case, they spoke French, or German) and they were often illiterate. So the assorted census documents require a certain amount of interpretation a century or more later.

In eight censuses from 1857 to 1895, for instance, one of my great-great-grandmothers was recorded under four different first names (Ida, Adeline, Lydia, Hattie). The ages of the residents were recorded in each census, and it was obvious that a precise age was not a priority to the resident; it was more likely an approximate age.

In the days before Immigration, a question was asked in which country the children were born, and the adults, if born in another country, were asked if they were naturalized citizen. It was simply a question.

Censuses also recorded other important information about buildings and livestock and crops. One would guess that the only significant difference between then and now is the sophistication of record keeping, but census records have always been kept, and they are important.

Back at the concerts, the last number sung by the second graders, including granddaughter Kelly, was “Joy to the World” by Hoyt Axton. Thanks to the magic of YouTube, here’s a rendition of that song, actually sung by Hoyt Axton, (which was modified, slightly, to fit second grade and the theme of their program, “McElligot’s Pool, by Dr. Seuss.”

“Coming to America” and “Joy to the World” indeed. Happy Census Day!