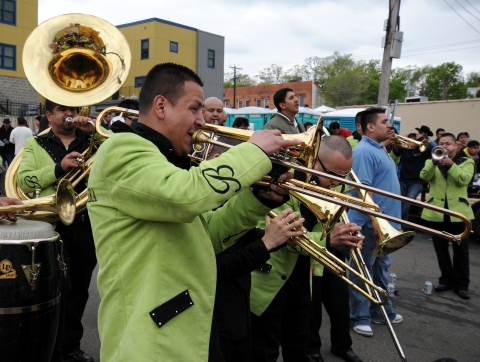 Photo by Jay Gabler, from the 2010 Cinco de Mayo Festival in St. Paul

The first weekend in May will be a festive one—which is only fitting, now that the weather has finally taken a turn for the better. Cinco de Mayo falls on the first Sunday in May (which also happens to be the day of the 39th Annual MayDay Parade and Festival), and there are ways to celebrate all weekend long (and beyond).

The holiday—which is not the same as Mexican Independence Day (that’s in September)—commemorates the Battle of Puebla of May 5, 1862, when a Mexican force of 4,500 men faced down 6,000 French soldiers and won. (Erik Hare has a more complete story here.) In the United States, there are some 33.6 million residents of Mexican origin; that’s something like 9 percent of the total population.

On Saturday, May 4, the Saint Paul Festival & Heritage Foundation hosts a Cinco de Mayo Festival in St. Paul’s District del Sol—complete with a 5k run, a parade, live music, a lowrider car show, a mobile health unit and a sports zone. The event made a successful debut with new organizers last year for Cinco de Mayo’s 150th anniversary; the Foundation predicts tens of thousands of spectators again this year. The parade begins at Wabasha & Plato and travels down Cesar Chavez Street in West St. Paul (click here for details). If you’re still curious what you’re in for, check out Jay Gabler’s or Alan Wilfahrt’s photos of the 2010 festival.

The following Sunday, May 12,  will have the Twin Cities celebrating all over again, on the other side of the river. Minneapolis’ Lake Street will be home to festivities between 2nd Avenue and Portland, courtesy of Sabri Properties. Expect live music, dancers, food, raffles and a festive crowd.

On the weekend of May 4 and 5, Rojo Mexican Grill in St. Louis Park celebrates with “Rojo de Mayo”, a block party weekend with live music and games. Rojo looks to entice participants with prize packs for the first 100 people, patio seating and drink specials; the fun starts at 12pm on Saturday and 11am on Sunday.

El Nuevo Rodeo is vying for your attention as well—with its usual Cinco de Mayo parties, hosting celebrations on Sunday (read: food, drink, music, dancing and the like) both inside and outside its Lake Street location.

Chevy’s in Bloomington will have an outdoor party tent, karaoke and prizes and giveaways all weekend long; Barrio Tequila Bar offers $5 margaritas and $3 Dos XX taps from 12-4 on Saturday and Sunday. At Masa in Minneapolis, the margaritas are cheaper ($3), and there will also be a “Marry Us” photo shoot.

Both Minneapolis and St. Paul will play host to Cinco de Mayo runs. Loop around Lake Nokomis on Saturday for the Cinco de Mayo 8k, then stick around for the Pinata Blast (whatever that may be). On Sunday, St. Paul’s Highland Park hosts a 5k to benefit global poverty; winners get a piñata. Now THAT is something to celebrate.