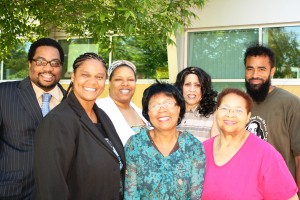 On Saturday June 18, from 10 am to 7 pm, the 2011 Juneteenth Celebration will be held at North Mississippi Regional Park, 5114 North Mississippi Drive in Minneapolis. This year’s theme is “Celebrating the Spirit of Freedom and Community.”

Mary Pargo first attended the Minneapolis festival at its original site, Pillsbury United Communities’ Oak Park Center in North Minneapolis. She remembered it as a small neighborhood gathering where entrepreneurs and food vendors gave visitors an opportunity to sample their wares.

Pargo said that it is interesting to her that she is now not only a 26-year employee of Oak Park Center, currently the program and building operational manager, but also the board chair for the Juneteenth planning committee.

Pargo began her involvement with Juneteenth in the early 1980s by joining the board at the request of then-vice president Bob Miller. She started by working with the vendors, making sure that their applications were completed and by communicating with people interested in attending and being a part of the festival. As a result of the financial success the festival achieved through her work with the vendors, she continued in the role.

After being held at Oak Park Center, for many years the Juneteenth celebration moved to Theodore Wirth Park, preceded by a parade down either Oak Park Avenue, Penn Avenue, or some combination thereof. The parade included politicians, local nonprofit organizations and businesses, marching bands and steppers groups. Yet, after a 2008 shooting incident where a young man injured two attendees, a decision was made to move the event to North Minneapolis Regional Park.

“I had to make a statement, which was just really out of character for Juneteenth,” Pargo said in reference to the shooting, “because we never had an incident inside of the actual festival.”

Although the young man was apprehended, after several meetings and discussions the board determined that it would be safer to find a different location. This will be the second year at the new location, but traffic challenges at the site do not allow for a parade. It was sacrificed as a result of the move.

With Pargo at the helm of the planning committee and with the help of Senator Linda Higgins, last year legislation was passed so that day of the Juneteenth event is now recognized by the state of Minnesota as Freedom Day. Juneteeth now has a year-round presence, which allows people to receive updates on the upcoming festival throughout the year at its website. The board is also currently looking for programs to support the learning and cultural components of the event.

New this year, at Cub grocery store on Broadway Avenue in North Minneapolis, “We did our first fundraiser there to [collect] membership dues [and donations],” Pargo said. Contributors are recognized as a giver on the Juneteenth website.

As for entertainment, Pargo said that the website lists the most current lineup. She also encouraged feedback regarding their newly developed website.

“We are partnering up with the nature center, which is part of the park…and we’re going to have the climbing wall, and the Animal Humane Society is going to be located in that area,” Pargo explained. Though attendees may choose to walk, “We are going to have a little train to take people up to that trail without them having to walk.” Taking the train allows a more scenic route through the park.

For more information on Juneteenth, visit their website at www.juneteenthminnesota.org.