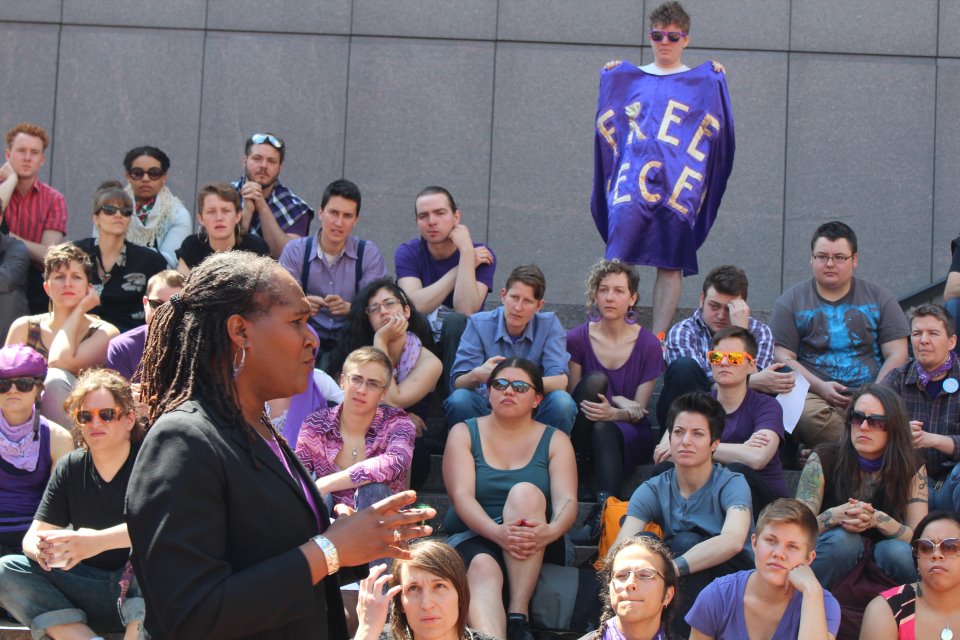 Crishaun (CeCe) McDonald pled guilty on May 2, to a reduced charge of second degree manslaughter (MSA 609.205), according to the clerk for Judge Daniel C. Moreno, who presided over the case.

Hennepin County District Attorney Mike Freeman said the sentence that was agreed upon was 41 months. McDonald’s original two murder charges carried a maximum sentence of 40 years. “From our perspective, because of the nature of the case, and things that occurred that night, we felt that this was the just sentence,” he said.

The plea deal came nearly a year after an incident that happened on June 5, 2011, when police responded to a report of a stabbing at the intersection of 27th Avenue South and 29th Street in Minneapolis, which is outside of Schooner Tavern.

The plea agreement was one that McDonald and her lawyers suggested to the prosecution, Freeman said. In order to make the plea, McDonald had to admit Monday morning that she had scissors in her hand, that the victim was not armed, that the scissors were a dangerous weapon, and that she acted unreasonably, he said. McDonald also had to admit that she had a duty to avoid harm, since she had a weapon and the victim did not, and in making the plea, she waved her right to a legal claim of self defense and a legal claim of accident, according to Freeman.

“My feeling is that this is an appropriate resolution to a tragic situation,” Freeman said. “One person is dead and another person going to prison for 41 months.”

McDonald’s supporters see the situation differently. “Within my work, it’s not unusual to see the legal system destroying a young transgender woman of color,” said McDonald supporter Katie Burgess, Executive Director of the Trans Youth Support Network. “She’s being punished for the crime of defending herself against a man with a swastika on his chest.”

Although the coroner’s report indicated that the victim, Dean Schmitz, had a swastika tattooed on his chest, in the pre-trial hearings Judge Moreno ordered that no mention or image of the tattoo be allowed in the court proceedings.

Moreno also ruled that the defense’s expert witness, Cesar Gonzales, from the University of Minnesota would be allowed to testify only as to the definition  “transgender,” and could not cite the National Coalition of Anti-Violence Programs study that showed that in 2010, 44 percent of hate crime victims were transgender women.

According to McDonald supporter Luce Guillen-Givins, Rebecca Wagner originally was to be the expert witness, but Moreno indicated that he was more willing to accept testimony from a university scholar, not an activist within the queer community. “It’s another instance of turning transgender into an exotic spectacle,” said Burgess.

Still, Burgess said McDonald’s message of faith, hope and love really translated throughout the community, reverberating throughout the local trans community as well as nationwide, with banners dedicated to McDonald erected in Oakland, New York and other cities.

“She is a beautiful leader because of the way her struggle galvanized our community, and showed the racism in our legal system,” Burgess said. Because McDonald advocated for herself, she showed “persistence in demanding justice,” she said, and showed “if you have faith you can do anything.”

Burgess said that one night, when CeCe’s supporters were chanting outside of the jail, another inmate said to McDonald: “Damn, girl — you’re a celebrity,” to which McDonald replied: “I’m not a celebrity, I’m part of a community.”

McDonald’s sentencing hearing will occur on June 4 at 1:30 p.m.

McDonald’s attorney, Hersch Izek, could not be reached for comment by publication time.

CORRECTION: According to McDonald supporter Luce Guillen-Givins, Rebecca Wagner originally was to be the expert witness, but Moreno indicated that he was more willing to accept testimony from a university scholar, not an activist within the queer community.