Let me ask you this, fellow citizens. Have you recently spoken with anyone who, in the course of your conversation, declared that the United States was the best country in the world, by far, no question, the best, best, best country in the entire world? If not, I suggest that you track down the Cave Cafe food truck, enjoy some Afro-Italiano fusion cuisine cooked by an Eritrean named Tewodros Negash, cast aside your cynicism, and ponder the magnificence of this great nation. 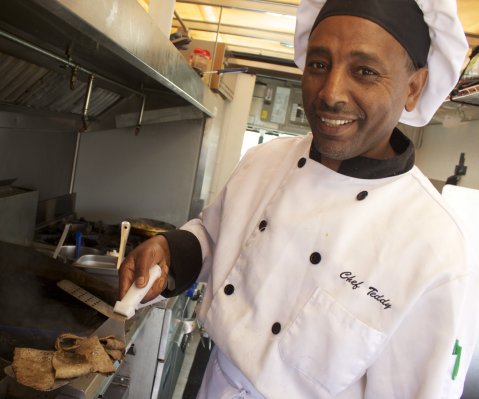 Chef Teddy, as Negash calls himself, opened his food truck in August, after many years of cooking around the world. Here’s his immigrant tale in a nutshell: He grew up in an Eritrean family living in Ethiopia. In the 1980s, the Ethiopian government began drafting young men to fight against Eritreans who were striving for independence. This put young Teddy in a bit of a bind, as you might imagine. One night in 1987, the militia came knocking at his family’s front door. Teddy jumped out the back window and took off for Djibouti, where he arrived after walking through the desert for two days with no money or possessions.

What does a penniless refugee do to survive? Teddy’s strategy involved cooking. His mother was a talented cook, and he’d always watched and admired her work. In Djibouti, people cooked outdoors over wood fires, where Teddy could easily observe their process. He lurked about, taking notes on ingredients and procedures, so he could claim that he was an experienced cook and talk someone into hiring him.

Eventually it worked, and he was hired to cook at the grand opening of a take-out restaurant. One little gap in his recently-acquired culinary knowledge had to do with potatoes: he saw that Djiboutian cooks put potatoes into their stir-fried vegetable mixes, but he couldn’t tell if the potatoes were raw, boiled, baked, or what. After talking himself up as a pro, he couldn’t exactly ask his new boss.

The first customer came into the restaurant, and he set out to impress her. She ordered a traditional lamb sauté dish served on French bread, and the sauté contained…potatoes. Unsure of how to proceed, he boiled the potato for a minute or two, hedging his bets. He chopped it up and put it into the sauté, served the sandwich, and the customer paid and left. Moments later, she returned in a rage. “This is inedible!” she hollered. “Give me my money back!”

“I have never seen a woman so mad!” says Teddy. He’s telling this as a humorous anecdote, but you can see that it wasn’t too funny at the time.

The next stop in his journey as a refugee was Egypt, where he lived and cooked for six months, and then to Sweden, where he stayed for four years. All the while he was petitioning the UNHCR to go to the U.S., where most of his family now lived. “In Sweden, I was always an outsider,” says the gregarious chef. “I couldn’t open a business there. But here, if you work hard, there’s hope.” Tough luck, Sweden! Now we’ve got Afro-Italiano fusion, and you’ve got herring and meatballs. Serves you right! 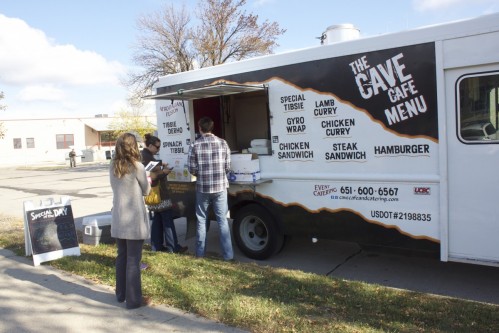 If you work or live near the University Avenue Central Corridor, soon to be a mass transit paradise but currently a construction minefield, you may have seen the Cave Cafe food truck hunkering down for the lunch hour on a side street. Last Wednesday, it went like this in the office where I work: Teddy, in a white chef’s outfit, hat and all, comes in to tell us he’s parked nearby today. Reilly says, “Yay! Best food truck ever!” and at noon goes over to get his favorite, the chicken curry. He brings it back to the office and Ben goes, “Whoa! What’s that great smell? I gotta get some!” And then Jane goes, “Nice! I’m calling Eric and telling him we’re having our lunch meeting here!” Everyone was ecstatic about the food, and not only because the only other lunch place by our office is Jimmy John’s. 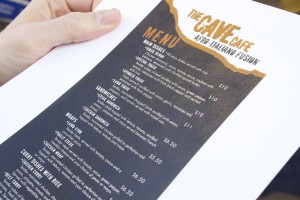 I hung out at the truck to see what other people were eating, as the aromas beckoned them from their cubicles of drudgery at various University Avenue workplaces. A couple of women had the chicken sandwich, not because it was an exotic Eritrean dish but because it was, they reported, the juiciest, most delicious chicken sandwich anywhere. A few adventurous souls ordered the “tibsie derha,” after establishing that the translation is “sautéed chicken.” Tibsie is a fragrant mix of tomatoes, garlic, onions, peppers, peas, carrots, and green beans. I followed my co-workers’ lead and had the chicken curry, which was delightfully fresh-tasting, the piquant curry spiked with jalapenos. 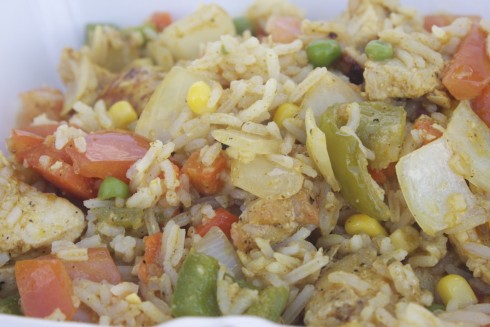 “This truck is a miracle for me,” says Teddy, who started his business with the help of a loan from St. Paul’s Neighborhood Development Center (NDC). From the time he escaped from Ethiopia, he “had so many miracles” with cooking that after arriving in Minnesota, he decided he should get serious about food as a career. He attended MCTC’s school of Culinary Arts, where he was the first student to win a scholarship, while working full-time at the Marriott. Since he graduated, he’s done guest chef gigs and catering around town, and he went through the NDC’s entrepreneurship training program. Isabel Chanslor, an NDC project manager, says that the NDC helped Teddy develop the business and marketing plan that allowed him to start his food truck business. Now they’re working on a plan for him to open a restaurant as well. 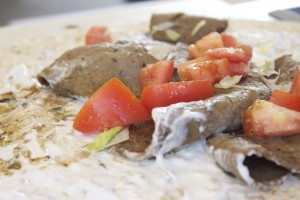 During the month of October, Teddy donated 20% of his profits to the World Food Programme as part of a famine relief effort for East Africa. He’d like to continue doing it, but NDC’s Chanslor notes that this generosity has to fit into the business plan and loan repayment. Teddy is adamant about continuing to contribute, in one way or another. “I’ve seen the effects of famine,” he says. “It’s terrible. Here, we have so much, so we must do what we can to help.” 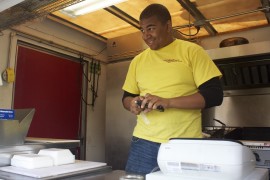 Teddy and his friendly co-worker, Shane Chanslor–Isabel’s son–will be on the road for another few weeks; you can follow them on twitter and track down the truck’s locations. When winter comes, Teddy has some regular catering gigs lined up, two at Energy Park and one at the St. Paul police department. The St. Paul police are big fans of his, and vice versa. “Everyone is nice in St. Paul, the health department, the police, everyone,” says Teddy. No comment about the higher food truck licensing fees in Minneapolis. Suffice it to say that you won’t see him across the river.

If you haven’t heard the term “Afro-Italiano fusion” before, it’s because Teddy invented it with his team at NDC. It’s also because you’re unaware, perhaps, that Italy colonized Eritrea in 1890 and dominated the area for many decades. The Italian culinary influence persists, especially in the use of fresh tomatoes, which Teddy’s mother used prolifically in her cooking. She loved Italian food. Teddy never saw his mom again after the night he fled his family’s home; she died in 1991.

“It was her cooking that allowed me to survive,” he says. “It was a miracle.”