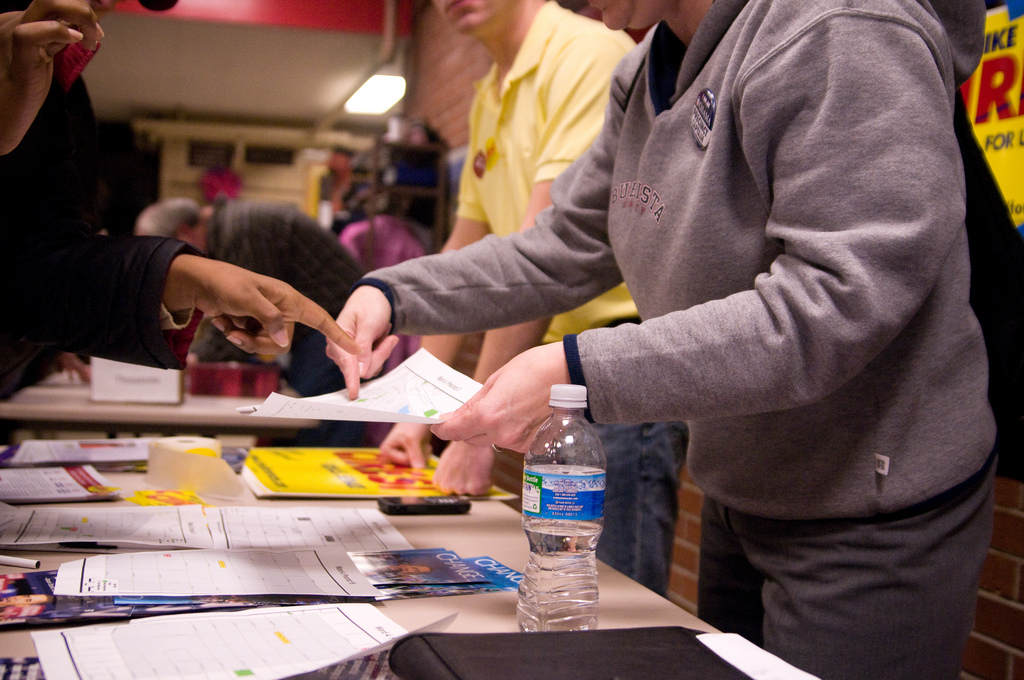 I have to admit that until this past week, I hadn’t been to a caucus since 1996. I don’t remember much about that caucus, except that it was long and boring, it took place at St. Mary’s Greek Orthodox Church, and I remember listening to speeches of people that wanted to be delegates.

This past week, I decided I should probably go, as I’ve been covering some of the races for the Daily Planet. Besides, it seemed like the citizenly thing to do. I didn’t really “study up” about what to expect, but in hindsight I really should have. I mean, I knew a lot about the different candidates, but in terms of the actual caucus process, I was pretty ignorant. It was one of the most confusing and irritating meetings I’ve ever experienced.

First of all, no one seemed to know what the rules were, and they kept changing them, and arguing about things like whether to allow in the dozen East African voters who came in late. The person running the meeting had absolutely zero ability to explain the process, and quite often several people would argue with him about the next step.

Now, I get it that good citizens should be informed and prepared or whatever, but you have a huge room full of people, maybe not all of them know what is going on. Maybe when you hand out slips of paper to fill out, you should explain what it is and what the different questions are asking.

I filled out three slips of paper at the caucus: one when I got there, another that was passed to me during the meeting, and the third when I volunteered to be an alternate delegate (more on that later). Each time it asked for my personal contact information, and on the second two there were various things to check off that I didn’t understand. When I asked, the answer I received was a kind of exasperated answer, as if the chairperson thought it was such a nuisance that I didn’t understand how things worked.

For the first two forms I filled out, I practiced constraint, and only gave my “secondary” e-mail, because I knew I was about to get a bunch of spam. I did not put my phone number. But then, when suddenly I became an alternate delegate, I figured I should probably include my phone number, in case I get called in on the big day. Boy, was that a mistake. The next day I got a phone call from a city council candidate asking for my vote. My deepest fear is that for the rest of my life I’m going to be on a list that gets called for various elections. I need to change my phone number.

Another thing that was confusing to me was that one of the main reasons that I was interested in going was because I had reported on this resolution pushed by the Minneapolis Energy Options, but when someone said that he wanted to push the resolution, he was told that the local DFL powers that be have decided that they wouldn’t be endorsing any resolutions during the caucuses. However, later I learned that in some precincts, resolutions were indeed passed. Clearly, there is some major miscommunication happening.

Blong Lang, a candidate for the Fifth Ward, posted a comment on his Facebook page originally written from his wife, in which she writes about her horrific experience about trying to sign up for pre-convention committees and getting the run-around about it.

In my own experience, there was nothing said about committees. The only thing that happened, once the precincts were split off, was that we had five extra people, so not everyone could be a delegate. The chair person explained that five people needed to volunteer to be alternates, and then we wouldn’t have to bother with listening to every single person campaign to be a delegate.

This is where it’s revealed that I really had no idea what was going on. So, I didn’t really get it that the caucus doesn’t really matter. It’s the DFL convention that matters, and apparently at the Caucus we decide who the delegates are, and they are the ones that actually get to vote for the DFL endorsement. The chairperson mentioned that if five people didn’t volunteer to be alternates, we would have to go through some other procedure, but didn’t explain what that procedure was very clearly. In the end, five people agreed to give up their vote.

Now, I recognize that perhaps in the 12 years since my last caucus perhaps I could have been a more engaged citizen and figured out what the caucus system was all about, but you know what? It shouldn’t be so complicated. Maybe I’m missing something, but it seems like a much simpler way to go about this would be to have a primary, where you cast your vote, and it doesn’t take all evening. That way, people that actually bother to show up will feel like it was for some purpose. For myself, at the end of it I felt like I would have been better off staying home.