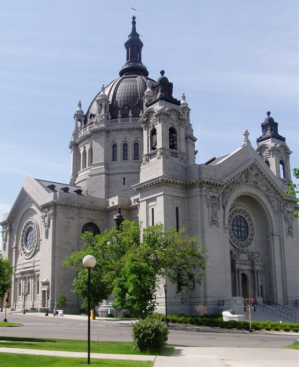 Archbishop John Neinstedt says Minnesota’s bishops will be distributing “more than one million” DVDs across Minnesota just weeks before the election. Part of an orchestrated campaign against same-sex marriage, the DVDs were funded by an anonymous donor and produced by the Knights of Columbus, a group that donates to the National Organization for Marriage, which is also running anti-gay marriage ads in Minnesota. While Neinstedt says the effort isn’t about politics, the state’s largest LGBT advocacy group slammed the new campaign.

Dennis McGrath, spokesman for the Archdiocese of St. Paul and Minneapolis, told the Minnesota Independent that the campaign is titled, “Preserving Marriage in Minnesota.”

The DVD itself,  “One Man, One Woman – Marriage and the Common Good,” is a hodgepodge of anti–gay marriage arguments including statements by Maggie Gallagher, founder of the National Organization for Marriage, who says gay marriage will be taught in schools if it is legalized. (The 14-minute video can be viewed at this Knights of Columbus website.)

“If same-sex marriage becomes the law then those who oppose it will increasingly be viewed as bigots,” says Catholic lawyer Anthony Piccirillo in the video. Legalizing gay marriage, the video charges, would result in loss of school accreditation and professional licenses for doctors who discriminate against same-sex couples and lead to the revocation of tax statuses for religious institutions. The video includes a segment on Courage, a Catholic group that works to change sexual orientation, and claims that same-sex marriage will lead to “polyamory.”

Echoing a theme of the newest TV ad by NOM and the Minnesota Family Council, it even makes the claim that the Rev. Dr. Martin Luther King, Jr. would have opposed same-sex marriage, a position at odds with statements by King’s late widow.

It was created by the Knights of Columbus, a group that gave $1.4 million to NOM over the last year.

“Our target is basically our Catholic people,” Archbishop Nienstedt told KSTP Monday. “To remind them of what we believe and why we believe it and why it’s so important that they believe it.”

“It’s not partisan politics in any way. But you know, it’s kind of rallying the troops around this issue and pointing out to Catholics that this is an important issue in every election year,” he said. “We’re not a political force, but we are a religious force. So we think we should be part of the conversation.”

But Outfront Minnesota, the state’s largest LGBT advocacy group, said politics is exactly what the DVD campaign is about.

“It is no accident that the Archdiocese’s clarion call for discrimination comes in the closing weeks of the 2010 campaign season,” said OutFront Minnesota Executive Director Monica Meyer. “Using the lives of GLBT people, immigrants, and poor people to provoke fear and advance a political agenda is a time-honored tradition among those whose vision for Minnesota is based on exclusion, marginalization, and demagoguery. It is shameful for a religious institution to stoop to such tactics when there are so many real, pressing issues facing people daily.”

The group is urging recipients to return the DVD.

“If you are one of the 800,000 Minnesota Catholics Nienstedt is targeting with this message of exclusion, intolerance and discrimination, you can send him a powerful message about his misguided priorities by writing ‘RETURN TO SENDER’ on the DVD and leaving it in your mailbox,” OutFront said in a statement on Tuesday.

Neinstedt, whose archdiocese is coordinating the DVD mailing, called same-sex marriage a “pervasive and socially destructive assault on marriage as a life-long, committed and procreative union between one man and one woman,” but said “there is neither prejudice nor bias against any individuals or groups in the statewide educational effort.” He added, “We must move this discussion from the polarizing positions that have played out in the media and begin to speak of the meaning that underlies the nature and purpose
of marriage.”

“Thirty one states have adopted constitutional amendments preserving the definition of marriage as being between one man and one woman,” Christopher Leifeld, executive director of the Minnesota Catholic Conference said in a statement. “Protecting marriage in this way benefits children, families and the common good of society itself. The Minnesota Catholic Bishops agree that Minnesota should follow this lead and let the people of Minnesota decide this issue rather than judges or legislatures.”

OutFront’s Meyer said that the Catholic church should stick to what they do best: charitable works.

“Americans, and Minnesotans, get the point: allowing same-sex couples to marry legally strengthens families and communities,” she said. “For the Catholic Archdiocese to divert funds badly needed to help people in crisis in order to respond to something that is patently not a crisis shows a mind-boggling detachment from the realities facing Minnesotans.”

Meyer said that even if the DVDs only cost $2 a piece, that’s over $1.6 million the Catholic church is spending on the campaign.

She asked, “How many meals could $1.6 million have provided?”