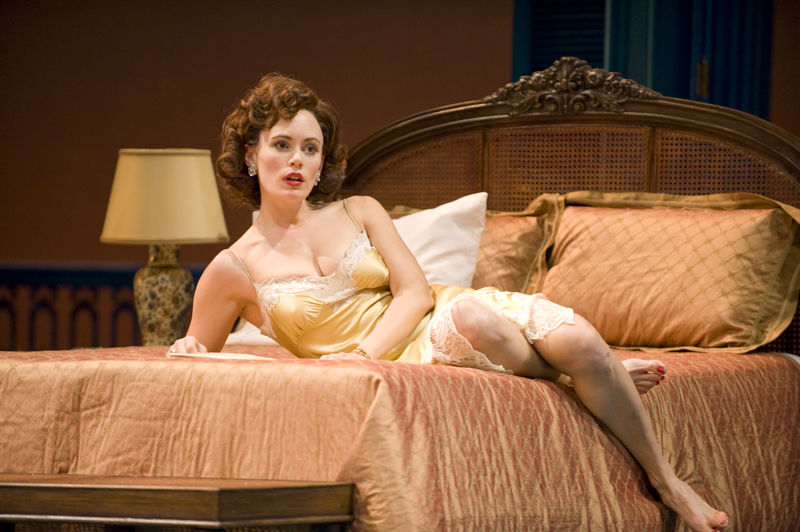 The character Brick spends much of Tennesee Williams’s Cat on a Hot Tin Roof seeking “that click” in his head: that moment when he’s finally drunk enough to be able to ignore his yowling inner demons. There’s a click of sorts in theater as well: when a production is working so well that as an audience member you become totally absorbed in its universe. That click comes as soon as the lights go up on the Guthrie Theater’s new production of Cat on a Hot Tin Roof, which doesn’t release its grip until the play’s final bittersweet embrace.

Director Lisa Peterson and her confident cast are justly assured of the strength of this classic script: not a line is wasted in this production, as the big revelations and showcase scenes fall like dominos until we end where we began, in the bedroom with Brick (Peter Christian Hansen) and his frustrated wife Maggie (Emily Swallow).

Peterson’s casting is superb, starting with Swallow, who spends much of the first act in near-monologue, landing every one of Maggie’s many memorable lines and successfully seducing the audience, watching from behind the fourth wall (technically, this being the Wurtele Thrust Stage, from behind the second, third, and fourth walls) as she tries and fails to rouse the interest of her sullen husband. Swallow proves just as deft as an ensemble player in the second act when the extended family arrive in the couple’s bedroom (a beautifully airy set by Rachel Hauck) to celebrate what may or may not be the last birthday of her flinty father-in-law (David Anthony Brinkley).

Brinkley burns down the house as Big Daddy, and Hansen rises to meet him nose-to-nose in the pair’s climactic confrontation. More than holding their own are Melissa Hart as the fraying Big Mama, Michelle O’Neill as money-minded sister-in-law Mae, and Chris Carlson, looking relieved to be applying his talents to a great play after struggling through last year’s shallow, showy God of Carnage.

From top to bottom, this is a very powerful, vastly entertaining production of one of the great American plays. See it now: frequently produced though this play is, it doesn’t get much better than this.