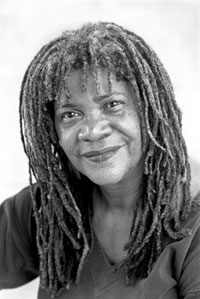 Carolyn Holbrook teaches English and Creative Writing at Hamline University, and her short memoirs have been published in numerous anthologies. In 1993, she founded SASE: The Write Place, a community-based center for writers and spoken-word artists, which is in the process of merging with Intermedia Arts (www.intermediaarts.org). The merger will be marked with a celebration on the evening of Thursday, June 8, watch upcoming Happenings columns (posted Fridays) for details. The Minneapolis Observer interviewed Carolyn last spring, and we recently checked in with her again to catch up.

Tell us what’s new with SASE.
The big news is that SASE is merging with Intermedia Arts. I’ve been working on transitioning out of the organization for quite a while and this is where we’ve landed. With the merger, I’m able to move on with assurance that what I created will survive and thrive. Our programs manager has moved into IA’s offices and we’re in the process of moving our poetry library over there. I’m working from home now in the capacity of “Consulting Director for SASE Programs at Intermedia Arts” until the end of the year in order to ensure a smooth transition. We’re having an event on June 8, at 6 p.m. to celebrate the merger and what the two orgs can do together that neither of us could do separately. Hope to see you there.

What have you been working on lately that you are most excited about?
In addition to consulting on the merger and teaching at Hamline, I’m coordinating a new writers-in-the-schools program for the Givens Foundation for African American literature.

I’m also co-authoring a memoir with my son, who is in prison. The working title is My #1 Son. The book is an exploration of why my son has spent most of his life behind bars and it will include both of our voices. I’ve read books by “experts,” including Angela Davis, which have plenty of interesting and important things to say about African American men and the penal system, but I’ve seen very little that’s been written by the real experts–the people who are living it. In the mid-1980s, novelist John Edgar Wideman co-authored a gorgeous memoir, Brothers and Keepers, with his incarcerated younger brother but I haven’t seen anything by a mother and child yet.

What book or books have most influenced your work?
The books that have influenced me the most over the last few years are memoirs—Paula, by fiction writer Isabel Allende, and Fathering Words, by the poet E. Ethelbert Miller. Both authors use stunning language to tell their stories. I can only dream that I could ever become as skillful a writer as either of them.

Isabel Allende’s daughter, Paula, became gravely ill in 1991 and subsequently fell into a coma. During months in the hospital, while waiting and praying for her daughter’s recovery, the author wrote the story of her bizarre ancestors and the 1973 military coup that led to her family’s exile from their native Chile (Paula, 1995. Harper Collins).

E. Ethelbert Miller’s memoir, Fathering Words, tells the story of when the author was 10 years old and his father told him how he had considered leaving his mother. Years later, now a writer and a father himself, Miller looks back on that simple remark and how it has shaped his life and his development as an African American writer (Fathering Words: The Making of an African American Writer, 2000, St. Martin’s Press).

What recent book or books have you been recommending to your friends?
The same two books mentioned above and Free Within Ourselves: Fiction Lessons for Black Authors, by Jewell Parker Rhodes (1999, Doubleday). This is a fine book, full of great writing exercises. It is geared toward African American fiction writers, but anyone of any race, and any writer who works in any genre, can benefit from this book.

Which local writers are you keeping an eye on?
Sha Cage, Katie Leo, and John Medeiros—three young writers who are terrifically exciting.

What’s the biggest challenge for you in your work these days?
My biggest challenge is looking truth squarely in the eye, accepting that some of my son’s truths are different from mine. It would be a lot easier for me to tell the story from my point of view, quoting him from time to time. And, of course it would be easier to stay within the safe framework of looking at how the system has failed him and countless other black men. In fact, it will be impossible to write this book without devoting ample space to the problems that black men have to deal with on a daily basis living in America. But my biggest challenge is facing up to the roles that his father and I have played in our son’s difficult life and including those truths in the story.

What literary trend most encourages you? Discourages you?
I don’t pay much attention to trends, I just write what I need to write. This does not mean that I don’t want my work to be published. Quite the contrary. However, if I were to speak to writers I would paraphrase Jewell Parker Rhodes. I would say that you are the expert of your stories, you are the one who holds your personal memories, your family stories, the genetic codes of your family lines and you are the keeper of your history. If you want your story to be told in the way you want it to be heard, you must tell it yourself.