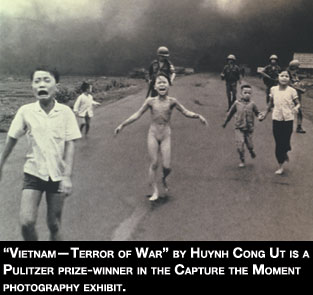 A disclaimer at the entrance to the photography exhibit at the Minnesota History Museum warns that some of the images included in Capture the Moment, the vast collection of Pulitzer prize-winning photographs, are shocking and may not be suitable for some audiences. It’s true that most of the images are sobering, some even gruesome, but it seems like required viewing for a public that remains largely ill informed and/or apathetic about weighty global events.

Only two Pulitzer photography prizes are awarded each year—one for spot, or breaking news, and one for feature photography. In this show, more than 130 images (all of the winners from 1942 to 2004) are included.

Some photos are familiar: the U.S. flag being raised at Iwo Jima (“Old Glory Goes Up On Mount Suribachi” by Joe Rosenthal), a young woman kneeling at the body of a dead college co-ed (“Kent State Massacre” by John Paul Filo), Vietnamese children running in terror after being burned by napalm (“Vietnam—Terror of War” by Huynh Cong Ut).

Others pictures are less recognizable, but no less powerful. In 1970 Jack Dykinga and two reporters from the Chicago Sun-Times spent four days inside the Lincoln and Dixon state schools for the retarded. The winning shot Dykinga produced of a naked young man curled in the fetal position atop his institutional mattress is a shameful account of how patients were treated just 35 years ago. Brief descriptions accompany each image, and in this one Dykinga explains that when taking photographs under such circumstances (where patients roamed in packs, were heavily sedated or tied to chairs, and often times covered in feces), “You’re on cruise control. Afterwards you have dreams and nightmares. I can still smell how it smells.”

Even more disturbing is Kevin Carter’s “Waiting Game for Sudanese Child.” In it, the New York Times photographer shot a tiny girl crawling toward a feeding station in Ayod, Sudan. As he crouched and readied his camera to take the picture, a vulture landed nearby. Carter shot the picture, then chased the bird away. According to the caption, he sat under a tree afterward and cried. The photo ran in newspapers worldwide and Carter was bombarded with queries: “Why didn’t you pick up the child?” Because of the risk of disease, journalists had been instructed not to touch famine victims. That controversy and other personal problems overwhelmed Carter, and in July 1994, just 16 month after he took the prize-winning photo, he committed suicide.

What’s amazing about this show is that these award-winning images, which have captured indelible moments in history, address the same global issues again and again, proving that history does repeat itself. Included are social, political and economic pictoral commentaries—from war to ethnic cleansing, poverty to natural disasters. Yesterday’s Rwanda is today’s Darfur … Vietnam is Iraq … earthquakes are hurricanes. Yes, the images are disturbing, but so are our global policies. Maybe by examining them we can learn from our past and do better next time.

During the Vietnam War, American journalists had access to military bases and were able to report on and photograph soldiers coming home in coffins. Today, the Bush administration (undoubtedly at the direction of master choreographer Karl Rove) has denied the media access to its bases at home and abroad during the U.S. military’s theatrical tour of the Middle East, so that few, if any, photos of war dead exist. But Bush’s blatant censorship of a “free press” doesn’t stop there.

In 2001 during its invasion of Afghanistan, U.S. forces bombed Al Jazeera’s bureau in Kabul. On April 8, 2003, the U.S. military attacked Al Jazeera’s office in Iraq, killing a Jordanian reporter and injuring an Iraqi cameraman. Later that day, a U.S. tank opened fire at the 15th floor of Baghdad’s Palestine Hotel—home to a number of foreign journalists—killing two.

Just days ago, on Oct. 24, the Palestine Hotel was again targeted—this time by a suicide bomber who exploded a cement truck outside the building. None of the the hotel’s occupants were injured, but at least six people outside the building were killed.

It seems that George Bush and the U.S. war machine have something in common with the Iraqi “insurgents”: distaste for a free press. Thankfully, though, there are still journalists who will inevitably capture these moments. ||