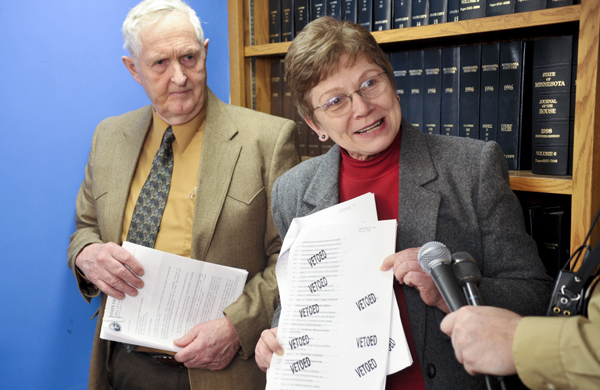 In the end, Gov. Tim Pawlenty signed a capital investment law smaller than his initial request, angering some and pleasing others.

“The DFL-controlled legislature seems incapable of prioritizing projects or simply saying no. So, I have again done it for you,” he wrote in his veto letter. “… Reducing the bill to this level reflects my commitment to fiscal discipline and an attempt to prioritize important state projects.”

“(This is) clearly a very muddled message about his priorities, certainly no vision for a Minnesota that takes us to a better place in terms of educating our workforce and rebuilding our economy,” she said.

“It’s just really bad timing to pass a debt bill right now when your top priority of the session is to eliminate debt,” Rep. Tony Cornish (R-Good Thunder) said in a statement. “There’s no doubt that some of the bonding projects are worthwhile in a typical year, but we are way too easygoing with our money as it is.”

Pawlenty repeatedly said he wouldn’t sign a bill in excess of $725 million in general obligation bonding, the amount suggested by Minnesota Management & Budget when releasing its economic forecast. Because the vetoes put the total below the forecasted amount, the law provides a $4.63 million debt service savings over the next three fiscal years. Total requests for bond money exceeded $4 billion.

Neither Hausman nor Sen. Keith Langseth (DFL-Glyndon), the sponsors of HF2700*/ SF2360, expect a veto override attempt, nor do they expect a second bill to be put together this session.

“When he wanted his things in there, we took $75 million out of our bill and put his in, and still, he basically massacred the bill. … In his office, he said both sides have to give a little. Giving a little means he comes up some and we come down. This bill is $30 million below his original bill,” Langseth said. “You simply cannot trust what he says. I see no point in going further. Hopefully, in January we’ll have a new governor we can trust.”

Among the areas hardest hit by Pawlenty’s veto is the Minnesota State Colleges and Universities system, which received $133.75 million in reductions for 16 projects. Those cuts include $42.33 million for a science and engineering laboratory at St. Cloud State University, $14.3 million to equip instructional space at Ridgewater College in Willmar, and $13.36 million for a learning resource center at South Central College in Faribault. “Fully funding all of these requests would reduce consideration of other worthy state projects in order to achieve a reasonably sized bill,” Pawlenty wrote.

Langseth, who said the cuts show Pawlenty “places such a low priority on higher education,” added all the projects would be built eventually, but at a higher cost.

Hausman noted that MnSCU has three times as many students as the University of Minnesota, but now gets less in the law. The university had two projects slashed: $6.67 million for an American Indian learning resource center in Duluth and $3.67 million for a new biological station and classroom renovation at the university facility in Itasca State Park.

Other items vetoed by Pawlenty include $53 million for civic center projects in Mankato, Rochester and St. Cloud; $43.5 million for the Transit Capital Improvement Program; $21.42 million for state trail acquisition and development; and $2 million for the Minneapolis Sculpture Garden.

Items remaining in the bill include:

• $47.5 million for an expansion of the sex offender program at Moose Lake;

• $27 million for the wastewater infrastructure fund;

• $16 million for an expansion of the Ordway Center for the Performing Arts;

• $4 million to expand the National Volleyball Center in Rochester.

“I think it would be helpful for him to discuss his priorities relative to what he signed and what he vetoed, because, I have to tell you, I don’t get it,” Hausman said. Pawlenty had no comment other than his veto letter.

Pawlenty was critical of the bill’s markup, noting, in particular, the way sections for trail acquisition and transit projects were written was an all-or-nothing approach, limiting his ability to line-item veto select projects. “As a result, entire sections were removed,” he wrote.

Citing local bridges and Public Finance Authority projects, Hausman said that it is not unusual to write a bill that way, using transportation as another example.

The law strikes the cap on a land purchase price for the proposed Lake Vermilion State Park. It also requires that until park infrastructure development begins, the land must continue to be open to the public for hunting, fishing and trail use.