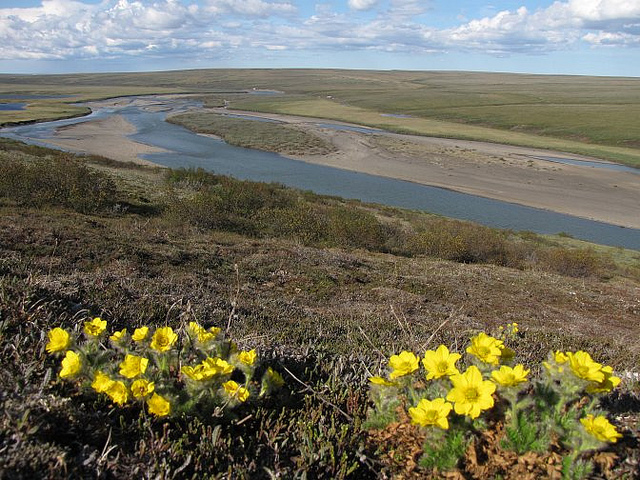 Utukok River in the Western Reserve

UPDATED 9/14/2012
Debbie Miller – author and naturalist, Arctic explorer and conservationist – is coming to Minnesota this September 26 to introduce us to a place that Interior Secretary Salazar has likened to Everglades National Park: calling the National Petroleum Reserve-Alaska (Reserve) “an iconic place on Earth.” Miller has traveled extensively throughout the Reserve, which is our largest untouched unit of public land in the country. Below you can find an essay Debbie has written in her new book entitled Tracking Time Through Alaska’s National Petroleum Reserve: On Arctic Ground – all about her adventures canoeing along some of America’s wildest rivers.

At 22 million acres the Reserve is an amazing place full of history and a rich diversity of today’s threatened and endangered wildlife such as our nation’s largest caribou herd, the largest populations of nesting arctic falcons and the threatened polar bear.

The administration recently announced a plan for conservation of special areas within the Reserve. I encourage people in the Twin Cities area to come to hear Miller’s introduction to this amazing place. More information is available at www.alaskawild.org, and in the events section of the Twin Cities Daily Planet.

We’ve launched off the gravel bar on the upper Nigu River, just north of the rugged spine of the Brooks Range in the southernmost region of the National Petroleum Reserve–Alaska. Most of the Nigu flows through the Reserve’s proposed Arctic Foothills and DeLong Mountains Special Area. The river’s name stems from the Iñupiaq word nigaq (pronounced KNEE-gack), meaning “rainbow.” Over the next hundred miles of paddling, we would come to understand why this is the Rainbow River.

On the gravel bars we soon discovered many colorful pieces of river-polished chert, a crystalline rock with a beautiful, smooth luster. The abundant chert was once a prized resource for indigenous people who knapped arrow- and spearheads from it more than 10,000 years ago. We found chert in nearly every color of the rainbow: brick red, maroon, black, jade, brown, gray, amber. Near the mouth of the river, the prominent Nigu Bluffs reveals many tilted bands of chert.

It’s early June, and the Nigu is running high from recent snowmelt. The water is numbingly cold, and there’s more white water than we expected. Patrick Endres steers our inflatable canoe, which has a tough, impenetrable skin the color of the river, a military green. Short and fit, he’s an experienced river runner, a confident guide who knows left from right when it comes to directing his canoe partner. I’m tall and long-torsoed, a novice paddler worried that my center of gravity is too high, hoping we don’t capsize.

Hugh Rose is just ahead of us with his twenty-one-year-old hunk of a nephew, Angus. Rounding the river’s S turn, they disappear behind the willow fringed gravel bar. We follow, curving around a blind corner, and suddenly realize the current is pulling us into a narrow channel with a cascading drop-off. There’s no way to avoid the falls.

Everything is happening too quickly. We spot Hugh and Angus trapped in a tangle of willows just beyond the falls, and we’re headed straight at them. There’s no place to go but over and down, dropping into a fast, slick stretch of water that rushes on through a maze of willow bushes. I hold my breath, hoping we don’t broadside Hugh’s boat.

I stroke with all the strength I can muster, wishing I had spent time in a weight room before the trip. Then over the drop we go, flopping into the boiling pool. Did Patrick fall out? No time to look.

Here come the willows. Within seconds the canoe is snared. We barely miss ramming Hugh’s boat. Patrick jumps into the frigid, thigh-high water and grabs the stern. Still holding my place in the bow, I grab the bailer and start scooping water from the wallowing canoe. I concentrate on getting rid of the water, forgetting that Patrick is probably half-frozen by now.

Finally, he politely suggests we angle the boat over to an opening through the willows where Hugh and Angus have managed to scoot through. I hop out of the boat into the gush of knee-deep water. It’s a scary proposition. The water looks deeper over that way, and I’m not sure I can hold the boat. What if we go broadside into the willows or flip over?

But Patrick is calm, confident. We sidestep slowly through the rushing current, planting our rubber boots securely with each slippery step, easing the boat to a better route through the drowning willows. Soon we’re back on the main river, and only one thought lingers: This is our first day of a twenty-eight-day trip.

Farther downriver, Hugh and Angus are paddling beneath an ominous sky full of scuzzy pewter clouds. Suddenly we see Hugh’s boat teeter to the right. Everything happens in slow motion.

Within seconds, they topple into the river as the boat capsizes. Angus is underwater briefly, then launches out of the river like a breaching whale, gasping for a big breath of air. Hugh quickly grabs the bow line and pulls the boat toward a gravel bar.

Shivering wet with tomato cheeks, Angus looks plenty cold. But I didn’t fully appreciate how cold until Patrick and I fell out of our canoe a few days later. We swam for less than a minute in water in the mid-30s, nearly as cold as snow, the kind of unbearable cold that makes you breathless, as if someone has locked you  in a deep freeze. It took me hours to regain my body temperature, lying on the mossy tundra out of the wind in dry long underwear, absorbing every available ray of sun.

Patrick and I eddy out and offer to build a fire. Hugh declines, wrings out his clothes, and wants to keep paddling to stay warm. He’s a tough guy, wearing neoprene socks and heavy-duty sandals for traction.

“Not cold, just numb,” he quickly responds, as if this is the norm.

How can anyone be comfortable with numb feet? I’m wearing thick wool socks and insulated knee-high boots; my feet are toasty warm.

For me, the far north is a place to bundle up in cotton, silk, wool, fleece, down, nylon, rubber gloves, and a waterproof rain suit. Short on body fat, I get cold easily. On the Colville River, in the might of 25 mile-per-hour winds, I once wore seventeen different layers of clothing. If you love the Arctic, why not be warm and enjoy it?

Our wild, wet, windy river-bashing experiences certainly made all of us appreciate life more fully. Even the little things, such as dry socks, a hot drink, and a warm sleeping bag, mattered. The discovery of small colorful pieces of chert reminded us that thousands of years ago, nomadic indigenous people lived year-round in this harsh environment, painstakingly crafting tools that helped them survive along the Rainbow River.