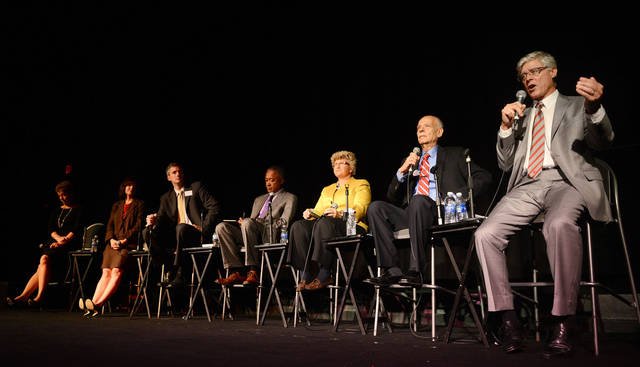 With less than seven weeks until Election Day, mayoral candidates are getting out to tell constituents about changes they’ll make in Minneapolis if elected to succeed Mayor R.T. Rybak.

Seven mayoral candidates focused on police misconduct, city zoning and development at a debate Thursday, often offering a variety of ways to address some of the city’s most visible issues.

The debate, at Parkway Theater in South Minneapolis, was likely the best-attended mayoral debate of the election, said Daren Nyquist, a spokesman for the Hale-Page-Diamond Lake Community Association — a neighborhood group that hosted the event.

Though no candidate received the DFL endorsement, five candidates who participated in the debate are running as DFLers. The other two, Cohen and Winton, are running as independents.

One issue the candidates discussed was housing and neighborhood preservation, which has drawn controversy in recent weeks after the City Council voted down a proposed Dinkytown development moratorium.

“The key to zoning is to make sure that zoning does not drive the market, but that the market drives the zoning,” Cohen said.

Andrew, Samuels and Winton said preserving Minneapolis neighborhoods, like citizens often want, sometimes goes against the needs of the city.

“We need to respect the architecture, the culture and nature of the community.” Samuels said. “At the same time, neighborhoods change.”

All of the mayoral candidates agreed that community members should have input on new construction projects.

Woodruff said some city planning decisions can come down to cost issues, so they might sometimes go against the community members’ opinions.

Andrew said the next mayor will need to know “when to be deferential” to community needs and when to defer to the City Council.

Winton said he would work for affordable housing across the city while simultaneously avoiding city budget increases.

Hodges said Minneapolis’ transit system has allowed for housing to be distributed across the city. If transit was made even more efficient, she said, developers could work throughout Minneapolis instead of focusing construction on individual areas.

“[It] allows us to develop horizontally, not just vertically,” she said.

The candidates also discussed ways to have a “community-oriented,” accountable and transparent police force.

Samuels said he wants to change the culture of the police department, creating partnerships between the police and the community in order to reduce misconduct.

Other candidates were more specific.

Hodges discussed her police accountability platform, which includes processes for hiring and training police officers as well as for building community relationships.

“We are not a safe city if people don’t feel safe calling the police,” she said.

Winton suggested that officers should have cameras on their uniforms while on duty to ensure police accountability.

“In cities where it’s been implemented, we’ve seen allegations of brutality come down dramatically,” he said.

Cohen said the police department should terminate officers who’ve been found guilty of misconduct in order to decrease the number of cases.

Cherryhomes and Andrew said they would work to give the Office of Police Conduct Review, formerly known as the Civilian Review Authority and Board, more power while they review cases of police misconduct.

Andrew said he wants civilians to have more authority during the review process. Currently, if the board is split on a conduct decision, the police chief or a police officer can break the tie.

“I would not allow a police officer or the chief to be the tie-breaking vote as it’s currently set up for civilian review,” he said.

Their next debate will be held Sept. 24 at the University of Minnesota’s Coffman Union.