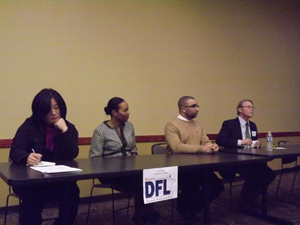 Residents of North Minneapolis packed the University of Minnesota’s Urban Research and Outreach/Engagement Center to hear from DFL candidates seeing to represent District 58B in the State House.

Four of the five candidates who filed to run for the seat being vacated by Rep. Bobby Joe Champion were on hand this past Tuesday and fielded a variety of questions from moderator, Lissa Jones of KMOJ radio.  Several of the questions were supplied by the audience members in attendance. Many focused on education, employment and neighborhood safety.

“I went to North High School; I’m a graduate of the Suma Tech program, which is its science, math and technology program. I have a classmate who’s a Ph.D. professor in astrophysics at Brisbane University. I have classmates who are engineers and scientists working for Anheuser-Busch and NASA,” said candidate Terra Cole, who said she holds a master’s degree in urban and regional planning. “I got my good education in the Minneapolis Public Schools. We have the capacity to produce this generation’s engineers and scientists but we need to insure that we invest in those folks.”

Raymond Dehn, who is also seeking the DFL nomination to represent District 58B, took a strong stance on the issue of crime and poverty. 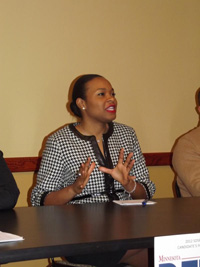 “The GOP is more than willing to spend money to lock people up, but not willing to spend money to solve the underlying issues of why people commit crime,” said Dehn, who also admitted he was a convicted felon. “Thirty-five years ago I made a bad choice, but I turned my life around. I have dedicated the past few years of my life to helping those who have made bad choices to turn their lives around.”

Dehn said he was fully pardoned for his crime, but said he knows his race played a role in his pardon. Dehn is white.

Candidate Ian Alexander, an attorney who lost his previous home to the tornado that hit North Minneapolis this past year, said he felt it important to remain in North Minneapolis. Alexander said he’s running on a platform of economic development, education and public safety. Among his plans help the district would be to change the gun laws that he feels hamper law enforcement from charging individuals found in possession of firearms.

Former ACORN activist, Nancy Pomplun, said the district needs a fairer tax structure and there needs to be more oversight at the capital.

Willie Dominguez, who is also running for the seat, chose not to participate in the event.