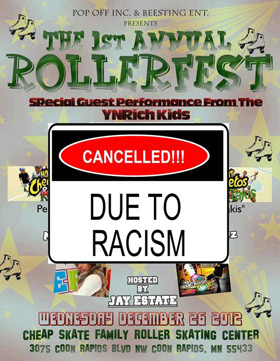 A holiday event that was supposed to cater to kids ages 5 – 12 was cancelled when owners of a Coon Rapids skating rink insisted on $3,000 worth of police presence.

That is what promoter Kimberly Holifield-Jones claims happened when she booked Cheap Skate Roller Center, 3075 Coon Rapids Blvd., NW for a Dec. 26 event. Holifield-Jones said though she has a signed contract and a receipt for deposit, the owner and a manager of Cheap Skate said she would have to pay for eight Coon Rapids police officers to patrol the early-evening event.

“It was supposed to be a nice little family event,” said Holifield-Jones.

Holifield-Jones said there where initial trepidations from Cheap Skate owner, Rick Lund, who said the venue had been the site of a shooting years prior following a teen event. “We assured him this was not a teen party and he asked us to provide four security (officers), which we agreed to. (Lund) signed the contract and we came back on Dec. 1 and dropped of a deposit and got a receipt.”

Things seemed to be on track until Holifield-Jones had a conversation with Jeremy Keeville and he expressed concern again over who was coming. Holifield-Jones said Keeville saw a Facebook posting of the event where older individuals indicated they were attending. The promoter told Keeville that of course older patrons would be on hand as the target audience was so young that many of their parents would be in attendance. According to Holifield-Jones, Keeville called back and said the Coon Rapids police department would not allow the event to go on without at least eight officers on hand. That cost would be $3,000. According to Holifield-Jones, Keeville and Lund told her the Coon Rapids police chief told them he was “disappointed” that Cheap Skate would book such an event and that the venue was being racially profiled by the city’s police department.

“Now they (Cheap Skate) are having an event with adults and liquor and they aren’t having any police,” said Holifield-Jones, who said that event is a predominantly Caucasian event. “(Cheap Skate) was just not trying to have (our) event.”

Capt. John Hattstrom of the Coon Rapids Police Dept. said his department did not deliver any edict that police had to be present for the event to take place.

“(Providing officers as security) is a service that we offer to businesses, but it’s totally optional,” said Hattstrom, who said the department was contacted about the event through representatives of Cheap Skate. “It’s between the rink and the promoter. To be quite honest, other options (of security) are much cheaper.”

Holifield-Jones said she believes the reason the rink wanted to cancel the event is because most of the expected patrons were African-American, who said Keeville got nervous when told the promoters planned on bussing in families from the downtown area.

The planned holiday event was to have featured child performers YN Rich Kids of “Hot Cheetos & Takis” fame, 7-year-old singer, Natia Marie and the Sckool Boyz, who are ages 11 and 12.

Holifield-Jones has teamed up with TakeAction Minnesota in hopes of bringing resolution to the issue. She said thus far, the event has cost promoters upwards of $3,000. The promoter said she hopes the rink will reconsider its stance on the event, but if it or the city of Coon Rapids is against the event, they will work together to find an alternate venue for the event.

“I asked Rick (Lund) if he was going to pay for our expenses and he said, ‘No,'” said Holifield-Jones.

Insight News made repeated attempts to contact both Lund and Keeville, but those attempts were unsuccessful.