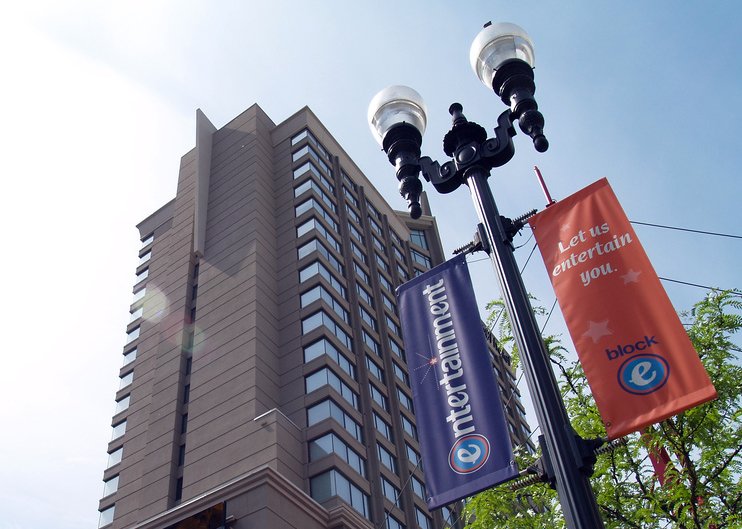 I tried to see a Fringe show downtown on Saturday afternoon. It was a matinee showing at New Century Theatre, and though I thought I allowed ample time, the heavy traffic from the various art fairs plus the Twins game caused me to rush trying to find a place to park and run over to the theater, arriving exactly at 2:30 to be told we were too late. I thrust my fists heavenward and asked myself why I ever go downtown.

I did remind myself that bicycling is a much more sane way to navigate downtown, although in this case I had to pick up my friend to get there. I then wandered over to the Block E to check out what’s become of the devastating monstrosity in anticipation of the upcoming Made Here exhibit, spearheaded by the Hennepin Theatre Trust and curator Joan Vorderbruggen.

I hadn’t been inside for a couple of years—not since the movie theater closed, anyway. Today, dark, low ceilings illuminate the 1990s décor as you pass empty store after empty store. There are escalators leading to nowhere and closed gates everywhere; it all seems quite surreal.

I’m too young to remember the glory days of Moby Dick’s and Rifle Sport Gallery, but I’ve heard tales of a thriving art and music scene on that block back in the 1970s and 80s before they tore it all down for it to become a parking lot for 10 years. I do remember when they erected the current travesty, with a host of national chains like Applebee’s and Hooters and the Hard Rock Café. I’m incredibly fascinated by the series of bad decisions that city leaders have embarked on that have led to the current situation.

Made Here clearly is an attempt to draw some foot traffic to Block E, generate some energy, and hopefully get some new tenants. Will they bite? I’m not sure. But I’m excited about the possibilities for some art in there. I mean, it’s already a conceptual art piece before they’ve even started. I definitely was conjuring up images of Sartre and Camus during my brief tour. Maybe a haunted installation motif? Something about the peril of ill-conceived city planning and design?

Seriously though, the place begs for movement. For color, for life. Somebody get a defibrillator, this thing is dying—or is already dead. Can art save it? What would it become? Is it worth saving?