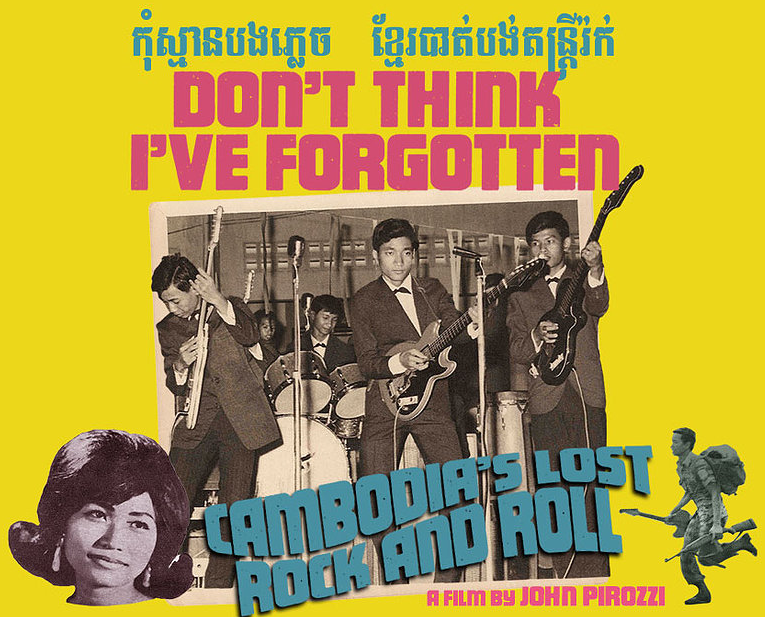 “Music is the soul of the nation,” Prince Sihanouk said of the huge importance of arts in Cambodian culture. Sihanouk, a son of a King who was a musician and mother, the head of a ballet company, was himself a filmmaker and a popular leader of the people, as King.

Upon becoming independent from the French in 1953, Cambodia’s arts and cultural scene blossomed” Numerous young musicians in Phnom Penh were deeply inspired to perform fun, buoyant pop, rock ‘n’ roll, surf, Cuban and cha cha cha music by U.S. French, British and Latin they heard. The first record store there was also a crucial element to the development of any early rock scene.

The first Cambodian guitar band, Baksey Cham Krong was formed in 1959. Many ‘60s and ‘70s Cambodian musicians and fans would emulate the fashion and dancing from western films, yet, the music they created, although stylistically similar, was unique in the eerily floating, exquisitely beautiful and often melancholy sounding vocals.

1965 to 1975 was a decade rich with halcyon days of peace, joie de vivre, and complete freedom of creative expression. In 1965, National Radio, and recording studios started up, helping artists such as Sinn Sisamouth, Ros Sereysothea, Pen Ran and Yol Aularong, to achieve widespread popularity. Cyclo drivers (bike taxis) would gather near speakers spread throughout Phnom Penh to listen to these artists. Sinn Sisamouth was considered the “Father” of music in Cambodia, an extremely popular singer loved by all, who would evolve his music with trends of the times. A young girl singer, Ros Serey Sothea was considered the sweetheart of Cambodia, moving people with her sad, melancholy vocals. Pen Ran “danced while she sang” and was a delightfully campy singer. Yol Aularong was an irreverently witty singer who audiences adored for his serious sounding songs with hilarious, rebellious lyrics, a sort of proto-punk musician. The amazing psychedelic band, Drakkar, and others, and youth of the late ‘60’s and early ‘70s embraced psychedelic music and dress inspired by San Francisco “hippy” scenes and The Rolling Stones and The Beatles.

In the ‘70s, ominous storm clouds of the bordering Vietnam War threatened. Eventually, as happens to “the grass between two large elephants fighting,” neutral Cambodia would become crushed by war-related events. Ultimately, on April 17, 1975, The Khmer Rouge took over. This was the day the music died – the beginning of a ruthless regime that squelched, burned most of the music and buried so many musicians.

In January, 1979, when the Cambodian people heard wild young singer Sieng Vanthey sing on the radio, they knew it was safe to return to their home in Phnom Penh and begin restoring their lives from nothing. The music sustained their indomitable spirit. The music and this film illuminates Cambodian culture and history.

“Music is a reflection of our society, reflecting us in time and space.” A few songs survived and have been spread to an appreciative world via compilations and cassettes. Now, Atlanta label, Dust-to-Digital is releasing a 20-song soundtrack to “Don’t Think I’ve Forgotten.” The Los Angeles based band Dengue Fever also pays tribute to Cambodia’s golden age. Singer Chhom Nimol’s voice harkens Rosy Sereysothea.

Don’t Think I’ve Forgotten screens  Friday, April 17, 2015 at 4:45 – on the 40th Anniversary of the Khmer Rouge takeover. The film is a phenomenal look at a decades-lost music scene, and the brilliant music performed with passion, sadness and joy, on a par with music from around the world.