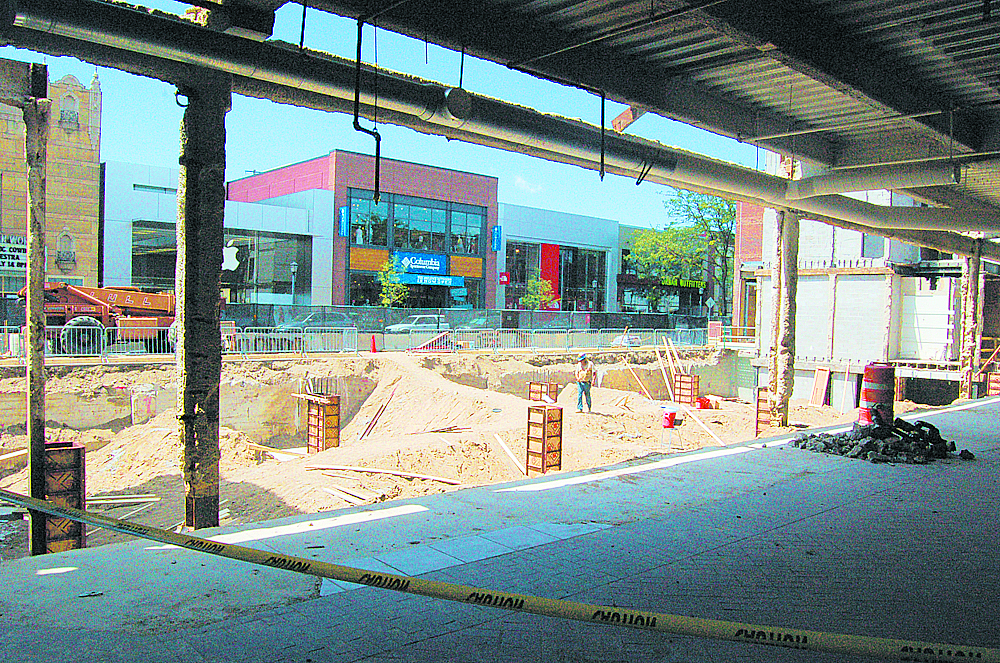 Looking Northwest from inside Calhoun Square out over future leasing space and across Hennepin Avenue on the West side of the building. (Photo by Bruce Cochran)

Since July 14 Calhoun Square’s management and leasing has been taken over by Jones Lang LaSalle. New General Manager Kenneth Seifert, responded to questions from the UNN about current and upcoming changes.

Since midsummer the west side of Calhoun Square has had a crater the size of an apartment building. That new hole is going to be 20,000 square feet on the first floor and 10,000 square feet on the second floor. Come late October the sidewalk will reopen and expose two new spaces ready for leasing. If tenants sign and work on a build out for the future spaces the earliest prediction for new tenants could be spring 2011.

Given the current economic environment and the state of leasing in Uptown, Seifert was asked if he would be leasing the new spaces immediately. In response Seifert replied, “We can be selective in who we choose. Calhoun Square is looking for unique businesses, shopping experiences and something the neighborhood would like.”

One of the things that has been pulling some shoppers from the Square during these economic hard times, has been the availability of free parking at other shopping destinations like that at 50th and France. This has prompted many shoppers to wonder if Calhoun Square will ever offer validated parking for paying shoppers in the Square. Seifert was not able at this time to comment on that question.

In the meantime, more changes have taken place. The parking ramp according to Seifert, “is showing higher levels of use not seen for two years.”

Finally Seifert was asked if there was anything in his opinion based on his experience that he would like to see happen in Uptown to help the economic environment. He replied that “Uptown would benefit from daytime office space traffic.”

Other changes coming to the Square include existing spaces. Bull Run Coffee Bar is hoping to open at the end of September at the West entrance. Famous Dave’s has completed construction of three new large windows on the East side of the building and will soon have outdoor seating in front of those windows. Sushi Tango moved across the hall with the addition of an outdoor deck.