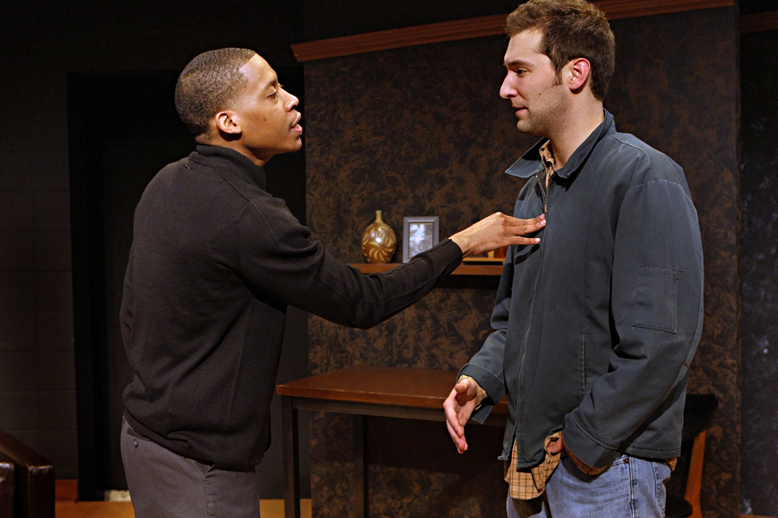 Racist. That’s what white people call black people who dare to mention race these days. At least that’s what we see in the comment sections of Daily Planet articles and in response to our posts on social media. “There is no circumstance under which ‘white’ fill-in-the-blank would be acceptable,” wrote one commenter on a Facebook post about a black art trivia competition. “Hypocrisy at its finest.”

That view isn’t representative of most white Americans, but it’s the kind of thing that dismayingly large numbers of people feel it’s appropriate to suggest. “The young characters in Buzzer think they are beyond race,” writes playwright Tracey Scott Wilson in a program note. “They know slavery was an abomination and all men are created equal. What’s to discuss?”

Plenty, Wilson knows—but fortunately, she doesn’t have her three characters stand around having a symposia. Buzzer achieves the kind of synthesis of personal and political that’s inescapable in real life but is rarely found in fiction: these are three people just trying to live their lives, but issues of race and class shape the ground on which they move.

The characters are in the demographic nonprofits like to refer to as “young professionals,” though one—Don (Hugh Kennedy)—is making a profession of his own recovery from drug and alcohol addiction. Just out of rehab, he moves in with his old friend Jackson (Namir Smallwood) and Jackson’s girlfriend Suzy (Sara Richardson), who have just rented an apartment together in the gentrifying neighborhood where Jackson grew up.

These are not happy people, and though there’s plenty of humor, Buzzer is not what you’re going to go home and describe to your babysitter as a “delightful” evening at the theater. Jackson and Suzy love each other, but their relationship is wracked with tensions stemming from Jackson’s relationship with his past and present neighborhood, Suzy’s stress in her job as an inner-city teacher, and the presence of Don, with whom Jackson and Suzy have love-hate relationships. When Don steps up to defend Suzy against a harassing group of men on the street, the characters’ races become relevant in ways that are ambiguous and difficult to discuss. Such is life in “post-racial” America.

You won’t soon forget these three characters, each embodied with detail and conviction. Though director Marion McClinton’s decision to have the actors incant their monologues almost like spoken-word poetry is distracting at first, by the end of the 90-minute play the actors have established an intense, wholly believable dynamic among themselves. Most impressive is Kennedy, whose character has to walk several tightropes at once: sober but recovering, pathetic but charming, fallen but strong, and privileged (by his race, among other things) yet mindful. Kennedy plays the role broadly, but never falls into caricature.

The Pillsbury House production of Buzzer is a superb staging of a penetrating script. It’s an important and engaging look at the complexities of human relationships in a world where race doesn’t mean what it used to, but where it’s still enormously relevant. Oh, wait, did I just say that? Sorry—I guess that makes me a “racist” too.