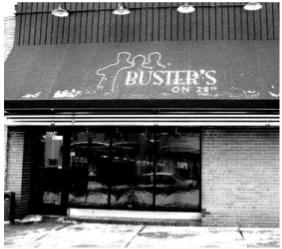 The figures on the awning of Buster’s On 28th represent the three owners—Joel, Mike, and Nick.

Since Joel, Mike, and Nick opened the doors of Buster’s On 28th back on July 24, 2007, they have been serving up delicious food and a dizzying selection of beers. They offer over 100 different bottled beers and around 30 beers on tap.

Don’t worry about what you’ll do after you’ve tried each of the beers on the menu-Buster’s serves up new beers on a weekly basis. The owners also have their “most-liked list” of beers that doesn’t change.

Buster’s strives to offer different and rare brews that you might not find at other places in the Twin Cities. Joel, Mike, and Nick also like to support our local breweries by featuring beers from around town and Wisconsin. One of their best-sellers has been Surly Furious, all the way from Brooklyn Center, Minnesota! For those of you who aren’t beer lovers, Buster’s also has wines and ciders.

While the owners are proud of their extensive beer menu, they are also proud of the food coming out of their kitchen. Chef Evan keeps the menu at Buster’s fresh, changing the entrées every three months and buying local ingredients as much as possible. The burgers at Buster’s, including their most popular Buster Burger, are served on buns from A Baker’s Wife, right around the corner. A Baker’s Wife also supplies freshly made desserts. Other ingredients come from local farmers’ markets or from distributors that buy from farmers throughout the state.

What else does Buster’s have to offer? To get your weekend started, drop in on Saturday for brunch. (There’s a Sunday brunch, too.) If you feel overwhelmed by all the beer options, you can build your own flight of any five beers. You can build an American craft flight for only $10 or an American craft- import mix for $12. And while you’re there reading through the extensive menu and eating Summit-EPA-beer-battered onion rings, hop on to the WiFi and read the latest edition of SENA News.

The owners and staff at Buster’s are excited to be in the neigh- borhood and would like to let everyone know, “It’s just great being in an area that supports everything that we have to offer. Thanks for making Buster’s what it is today!”