As Christian Lander stated in “Stuff White People Like” – they like Public Transportation That Is Not a Bus. I guess that narrows it down to trains: Light Rail, Subways, Commuter Rail, Trams, etc. Part of reason white people (and politicians, and developers) like rail transit is because the rails are part of the route. It has a greater sense of permanence.

So there I was, at the Northeast library. It was midday on a weekday and I had taken my son there to hang out while I picked up some books. We left the library to eat at a restaurant across the street. While waiting at the stoplight, I noticed that the white right-of-way indicator was illuminated on the traffic signal. I looked both ways for an ambulance or fire truck as I’ve been conditioned to do. There were no emergency vehicles. In fact, the street was surprisingly quiet. Then I saw the signal preempted a block down, and the only thing there was the route 10 bus, picking up some passengers. 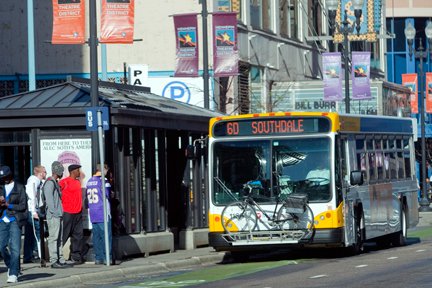 At that point I realized the bus was preempting the signal, and then later I confirmed it with Metro Transit. Right of way achievement unlocked! OK, it’s not actual preemption, the bus can only tell a green light to stay green a little longer, but it opens up a world of possibilities. Bringing the magic of right of way to the lowly bus could literally bring it up to speed. Yet again, I find myself marveling at the opportunities we have to solve real-world problems by leveraging technology.

Metro Transit says the bus will only preempt the signal if it’s running behind schedule. Why not do it all of the time to instead see how much time can be shaved off the schedule permanently? Ridership can often be correlated with convenience and I think many people would see the bus as more convenient than their car if it got every green light while they are stuck in their car at every red.

And why not let the bus truly preempt the signal? A hierarchy of preempt priority would be maintained: ambulance, police and fire would of course all share top priority. But then the bus would come second. Normally when I’m driving down Central Avenue, I avoid getting behind the 10 as best I can. It’s always creeping along, stopping at every block. Add preemption to the mix, and you might actually have cars purposefully following the 10, like ambulance chasing lawyers, going through every light on a green. Then they may truly wonder why they’re chasing the 10, rather than riding on it.

Lastly, why is this technology only being used on one route? I’m pretty certain that almost every signal in the metro area has preemption technology. We should be using it everywhere! I like what Metro Transit is doing, but as usual, it’s just not enough.