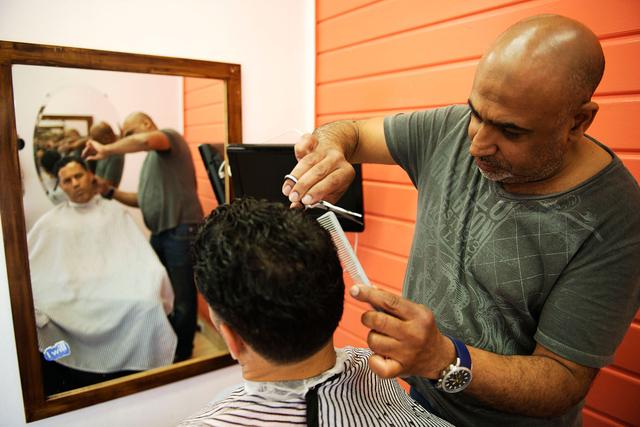 Casablanca owner Abdulhad Batal cuts the hair of Cultural Studies & Comparative Literature Studies lecturer and 10 year customer Imed Labidi. Casablanca, which opened 15 years ago in Dinkytown, would be affected by the Opus development and the delay over Dinkytown environmental concerns. (Photo by Emily Dunker)

Plans for a new apartment complex on Fifth Street and 14th Avenue have been moving quickly, but the efforts of Dinkytown advocates at City Hall could slow it down.

The group Save Dinkytown presented a petition calling for an environmental review of the project to the Minneapolis City Planning Commission last week.

Now, the effects of developer Opus Group’s planned 140-unit apartment complex on the neighborhood will be reviewed by the Council Committee on Zoning and Planning before the City Council can approve the project and the rezoning it requires.

Save Dinkytown collected more than 100 signatures on a petition that stated the still-unnamed development could negatively impact the “unique history, aesthetic character and identity of Dinkytown.”

The state’s environmental policy says the state has a responsibility to “preserve important historic, cultural, and natural aspects of our national heritage.”

The complex would have 9,500 square feet of commercial space on the ground floor , according to city documents. Matt Rauenhorst , senior director of real estate development at Opus, said Opus hasn’t come out with its retail prices yet, and tenants will drive the rates.

Opponents of the project said in the petition the cost of this new space would “push [the] traditional small business base out. ”

Book House owner Kristen Eide-Tollefson said any delay to the project is good.

Save Dinkytown’s petition says the large scale of the Opus project would “diminish the apparent significance and character of the historic business district,” while destroying the “Dinky” in Dinkytown.

Imed Labidi , a University lecturer and Casablanca customer for 10 years, said he’s sad to see these small businesses go because of their “sentimental value.”

“The character [of Dinkytown] will completely disappear,” he said.

Rauenhorst said he thinks the new apartment complex will rehabilitate Fifth Street and add to the character of Dinkytown.

Laurel Bauer, owner of the House of Hanson, said the Opus project would improve the neighborhood.

She said it was a very difficult decision to sell the grocery store that has been in her family for over eight decades, but trying to stay in business has been a “fiscal nightmare” since CVS Pharmacy came into the area.

Susan Duffy , co-owner of Duffy’s, said the cultural and historical aspect of Dinkytown won’t go away with the new developments.

“It’s an area that embraces changing times,” she said. “This will save Dinkytown.”

Dinkytown: “Why do you need a plan if development is already happening?” (Bill Huntzicker, 2013)

And Bill Huntzicker’s ten-part series on “Development in Dinkytown”:

Part 3: The House of Hanson and the price of convenience

Part 4: The Book House fights for its life

Part 10: “If they lay one finger on Al’s Breakfast, I’ll be at the barricades”